Anarchism: A Matter of Words

(Where the words "Anarchism" and "Libertarian" come from) 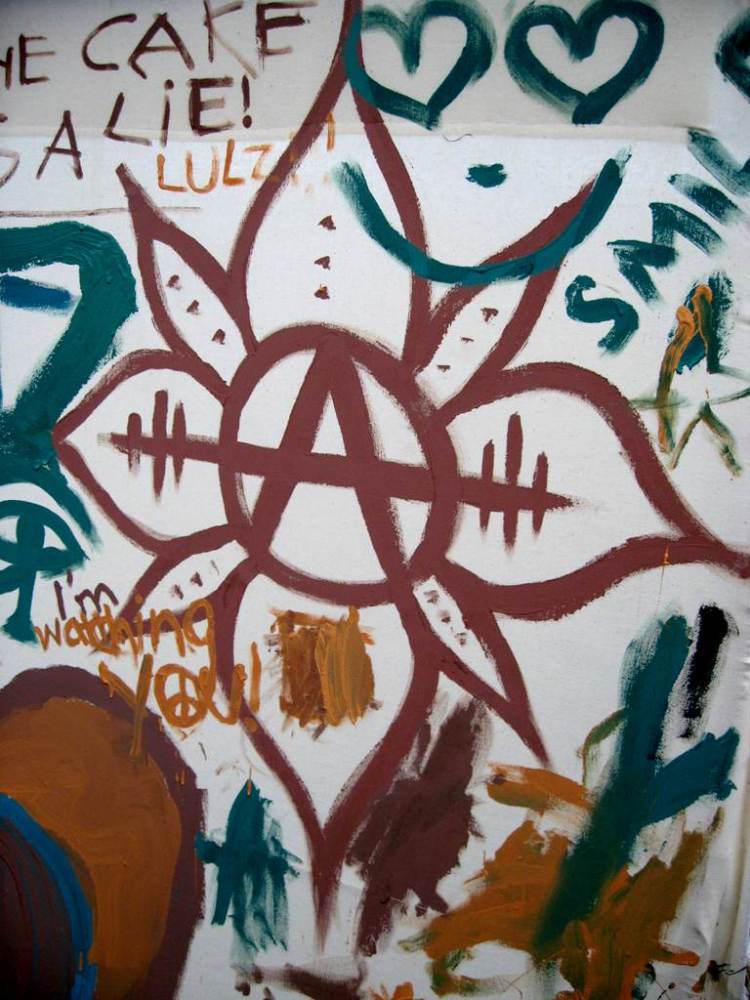 Photo by baltine,
CC BY License

From Chapter 1, part 1 of the book "Anarchism", by Daniel Guerin

The word anarchy is as old as the world. It is derived from to ancient Greek words, "an", "arkhe^", and means something like the absence of authority or government. However, for millennia the presumption has been accepted that man cannot dispense with one or the other, and anarchy has been understood in a pejorative sense, as a synonym for disorder, chaos, and disorganization.

Pierre-Joseph Proudhon was famous for his quips (such as "property is theft") and took to himself the word anarchy. As if his purpose were to shock as much as possible, in 1840 he engaged in the following dialogue with the "Philistine".

"You are a republican."
"Republican, yes; but that means nothing. Res publica is 'the State.' Kings, too, are republicans."
"Ah well! You are a democrat?"
"No."
"What! Perhaps you are a monarchist?"
"No."
"Constitutionalist then?"
"God forbid."
"Then you are an aristocrat?"
"Not at all!"
"You want a mixed form of government?"
"Even less."
"Then what are you?"
"An Anarchist."

He sometimes made the concession of spelling anarchy "an-archy" to put the packs of adversaries off the scent. By this term he understood anything but disorder. Appearances notwithstanding, he was more constructive than destructive, as we shall see. He held government responsible for disorder and believed that only a society without government could restore the natural order and re-create social harmony. He argued that the language could furnish no other term and chose to restore to the old word anarchy its strict etymological meaning. In the heat of his polemics, however, he obstinately and paradoxically also used the word anarchy in its pejorative sense of disorder, thus making confusion worse confounded. His disciple Mikhail Bakunin followed him in this respect.

Proudhon and Bakunin carried this even further, taking malicious pleasure in playing with the confusion created by the use of the two opposite meanings of the word: for them, anarchy was both the most colossal disorder, the most complete disorganization of society and, beyond this gigantic revolutionary change, the construction of a new, stable, and rational order based on freedom and solidarity. The immediate followers of the two fathers of anarchy hesitated to use a word so deplorably elastic, conveying a negative idea to the un- initiated, and lending itself to ambiguities which could be annoying to say the least. Even Proudhon became more cautious toward the end of his brief career and was happy to call himself a "federalist." His petty-bourgeois descendants preferred the term mutuellisme to anarchisme and the socialist line adopted collectivisme, soon to be displaced by communisme. At the end of the century in France, Sebastien Faure took up a word originated in 1858 by one Joseph Dejacque to make it the title of a journal, Le Liberataire. Today the terms "anarchist" and "libertarian" have become interchangeable.

Most of these terms have a major disadvantage: they fail to express the basic characteristics of the doctrines they are supposed to describe. Anarchism is really a synonym for socialism. The anarchist is primarily a socialist whose aim is to abolish the exploitation of man by man. Anarchism is only one of the streams of socialist thought, that stream whose main components are concern for liberty and haste to abolish the State. Adolph Fischer, one of the Chicago martyrs, (1) claimed that "every anarchist is a socialist, but every socialist is not necessarily an anarchist."

Some anarchists consider themselves to be the best and most logical socialists but they have adopted a label also attached to the terrorists, or have allowed others to hang it around their necks. This has often caused them to be mistaken for a sort of "foreign body" in the socialist family and has led to a long string of misunderstandings and verbal battles-- usually quite purposeless. Some contemporary anarchists have tried to clear up the misunderstanding by adopting a more explicit term: they align themselves with libertarian socialism or communism.

[1] In 1883 an active nucleus of revolutionary socialists founded an International Working Men's Association in the United States. They were under the influence of the International Anarchist Congress, held in London in 1881, and also of Johann Most, a social democrat turned anarchist, who reached America in 1882. Albert R. Parsons and Adolph Fischer were the moving spirits in the association, which took the lead in a huge mass movement concentrated on winning an eight-hour day. The campaign for this was launched by the trade unions and the Knights of Labor, and May 1, 1886, was fixed as the deadline for bringing the eight-hour day into force. During the first half of May, a nationwide strike involved 190,000 workers, of whom 80,000 were in Chicago. Impressive mass demonstrations occurred in that city on May 1 and for several days thereafter. Panic-stricken and terrified by this wave of rebellion, the bourgeoisie resolved to crush the movement at its source, resorting to a bloody provocation if need be. During a street meeting on May 4, 1885, in Haymarket Square, a bomb thrown at the legs of the police in an unexplained manner provided the necessary pretext. Eight leaders of the revolutionary and libertarian socialist movement were arrested, seven of them sentenced to death, and four subsequently hanged (a fifth committed suicide in his cell the day before the execution). Since then the Chicago martyrs-- Parsons, Fischer, Engel, Spies, and Lingg-- have belonged to the international proletariat, and the universal celebration of May Day (May 1) still commemorates the atrocious crime committed in the United States.

From : University of Utah