Anarchists Have Forgotten Their Principles

: There have almost certainly been better anarchist writers, more skilled anarchist organizers, anarchists who have sacrificed more for their beliefs. Perhaps though, Malatesta is celebrated because he combined all of these so well, exemplifying thought expressed in deed... (From: Cunningham Bio.)
• "Our task then is to make, and to help others make, the revolution by taking advantage of every opportunity and all available forces: advancing the revolution as much as possible in its constructive as well as destructive role, and always remaining opposed to the formation of any government, either ignoring it or combating it to the limits of our capacities." (From: "The Anarchist Revolution," by Errico Malatesta.)
• "...the State is incapable of good. In the field of international as well as of individual relations it can only combat aggression by making itself the aggressor; it can only hinder crime by organizing and committing still greater crime." (From: "Pro-Government Anarchists," by Errico Malatesta, ....)
• "If it is true that the law of Nature is Harmony, I suggest one would be entitled to ask why Nature has waited for anarchists to be born, and goes on waiting for them to triumph, in order to destroy the terrible and destructive conflicts from which mankind has already suffered. Would one not be closer to the truth in saying that anarchy is the struggle, in human society, against the disharmonies of Nature?" (From: "Peter Kropotkin - Recollections and Criticisms of....)

Anarchists Have Forgotten Their Principles 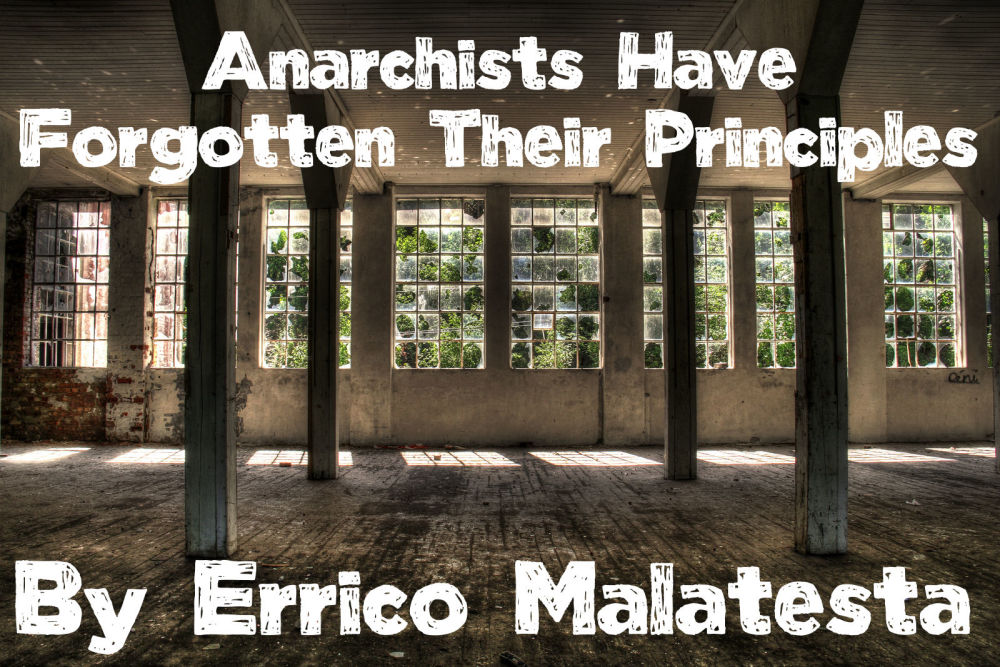 At the risk of passing as a simpleton, I confess that I would never have believed it possible that Socialists—even Social Democrats—would applaud and voluntarily take part, either on the side of the Germans or on the Allies, in a war like the one that is at present devastating Europe. But what is there to say when the same is done by Anarchists—not numerous, it is true, but having among them comrades whom we love and respect most?

It is said that the present situation shows the bankruptcy of “our formulas”—i.e., of our principles—and that it will be necessary to revise them.

Generally speaking, every formula must be revised whenever it shows itself insufficient when coming into contact with fact; but it is not the case to-day, when the bankruptcy is not derived from the shortcoming of our formulas, but from the fact that these have been forgotten and betrayed.

Let us return to our principles.

I am not a “pacifist”. I fight, as we all do, for the triumph of peace and of fraternity among all human beings; but I know that a desire not to fight can only be fulfilled when neither side wants to, and that so long as men will be found who want to violate the liberties of others, it is incumbent on these others to defend themselves if they do not wish to be eternally beaten; and I also know that to attack is often the best, or the only, effective means of defending oneself. Besides, I think that the oppressed are always in a state of legitimate self-defense, and have always the right to attack the oppressors. I admit, therefore, that there are wars that are necessary, holy wars: and these are wars of liberation, such as are generally “civil wars”—i.e., revolutions.

But what has the present war in common with human emancipation, which is our cause?

To-day we hear Socialists peak, just like any bourgeois, of “France,” or “Germany,” and of other political and national agglomerations—results of historical struggles—as of homogenous ethnographic units, each having its proper interests, aspirations, and mission, in opposition to the interests, aspirations and a mission of rival units. This may be true relatively, so long as the oppressed, and chiefly the workers, have no self-consciousness, fail to recognize the injustice of their oppressors. There is, then, the dominating class only that counts; and this class, owing to its desire to conserve and to enlarge its power, even its prejudices and its own ideas, may find it convenient to excite racial ambitions and hatred, and send its nation, its flock, against “foreign” countries, with a view to releasing them from their present oppressors, and submitting them to its own political economical domination.

But the mission of those who, like us, wish the end of all oppression and of all exploitation of man by man, is to awaken a consciousness of the antagonism of interests between dominators and dominated, between exploiters and workers, and to develop the class struggle inside each country, and the solidarity among all workers across the frontiers, as against any prejudice and any passion of either race or nationality.

And this we have always done. We have always preached that the workers of all countries are brothers, and that the enemy—the “foreigner”—is the exploiter, whether born near us or in a far-off country, whether speaking the same language or any other. We have always chosen our friends, our companions-in-arms, as well as our enemies, because of the ideas they profess and of the position they occupy in the social struggle, and never for reasons of race or nationality. We have always fought against patriotism, which is a survival of the past, and serves well the interest of the oppressors; and we were proud of being internationalists, not only in words, but by the deep feelings of our souls.

And now that the most atrocious consequences of capitalist and State domination should indicate, even to the blind, that we were in the right, most of the Socialists and many Anarchists in the belligerent countries associate themselves with the Governments and the bourgeoisie of their respective countries, forgetting Socialism, the class struggle, international fraternity, and the rest.

It is possible that the present events may have shown that national feelings are more alive, while feelings of international brotherhood are less rooted, than we thought; but this should be one more reason for intensifying, not abandoning, our antipatriotic propaganda. These events also show that in France, for example, religious sentiment is stronger, and the priests have a greater influence than we imagined. Is this a reason for our conversion to Roman Catholicism?

I understand that circumstances may arise owing to which the help of all is necessary for the general well-being: such as an epidemic, an earthquake, an invasion of barbarians, who kill and destroy all that comes under their hands. In such a case the class struggle, the differences of social standing must be forgotten, and common cause must be made against the common danger; but on the condition that these differences are forgotten on both sides. If any one is in prison during an earthquake, and there is a danger of his being crushes to death, it is our duty to save everybody, even the jailers—on condition that the jailers begin by opening the prison doors. But is the jailers take all precautions for the safe custody of the prisoners during and after the catastrophe, it is then the duty of the prisoners towards themselves as well as towards their comrades in captivity to leave the jailers to their troubles, and profit by the occasion to save themselves.

If, when foreign soldiers invade the sacred soil of the Fatherland, the privileged class were to renounce their privileges, and would act so that the “Fatherland” really became the common property of all the inhabitants, it would then be right that all should fight against the invaders. But if kings wish to remain kings, and the landlords with to take care of their lands and of their houses, and the merchants wish to take care of their goods, and even sell them at a higher price, then the workers, the Socialists and Anarchists, should leave them to their own devices, while being themselves on the look-out for an opportunity to get rid of the oppressors inside the country, as well as of those coming from outside.

In all circumstances, it is the duty of the Socialists, and especially of the Anarchists, to do everything that can weaken the State and the capitalist class, and to take as the only guide to their conduct the interest of Socialism; or, if they are materially powerless to act efficaciously for their own cause, at least to refuse any voluntary help to the cause of the enemy, and stand aside to save at least their principles—which means to save the future.

All I have just said is theory, and perhaps it is accepted, in theory, by most of those who, in practice, do just the reverse. How, then, could it be applied to the present situation? What should we do, what should we wish, in the interests of our cause?

It is said, on this side of the Rhine, that the victory of the Allies would be the end of militarism, the triumph of civilization, international justice, etc. The same is said on the other side of the frontier about a German victory.

Personally, judging at their true value the “mad dog” of Berlin and the “old hangman” of Vienna, I have no greater confidence in the bloody Czar, nor in the English diplomatists who oppress India, who betrayed Persia, who crushed the Boer Republics; nor in the French bourgeoisie, who massacred the natives of Morocco; nor in those of Belgium, who have allowed the Congo atrocities and have largely profited by them—and I only recall some of their misdeeds, taken at random, not to mention what all Governments and all capitalist classes do against the workers and the rebels in their own countries.

In my opinion, the victory of Germany would certainly mean the triumph of militarism and of reaction; but the triumph of the Allies would mean a Russo-English (i.e., a knouto-capitalist) domination in Europe and in Asia, conscription and the development of the militarist spirit in England, and a Clerical and perhaps Monarchist reaction in France.

Besides, in my opinion, it is most probable that there will be no definite victory on either side. After a long war, an enormous loss of life and wealth, both sides being exhausted, some kind of peace will be patched up, leaving all questions open, thus preparing for a new war more murderous than the present.

The only hope is revolution; and as I think that it is from vanquished Germany that in all probability, owing to the present state of things, the revolution would break out, it is for this reason—and for this reason only—that I wish the defeat of Germany.

I may, of course, be mistaken in appreciating the true position. But what seems to be elementary and fundamental for all Socialists (Anarchists, or others) is that it is necessary to keep outside every kind of compromise with the Governments and the governing classes, so as to be able to profit by any opportunity that may present itself, and, in any case, to be able to restart and continue our revolutionary preparations and propaganda.

1914
Anarchists Have Forgotten Their Principles — Publication.

Image Gallery of Anarchists Have Forgotten Their Principles