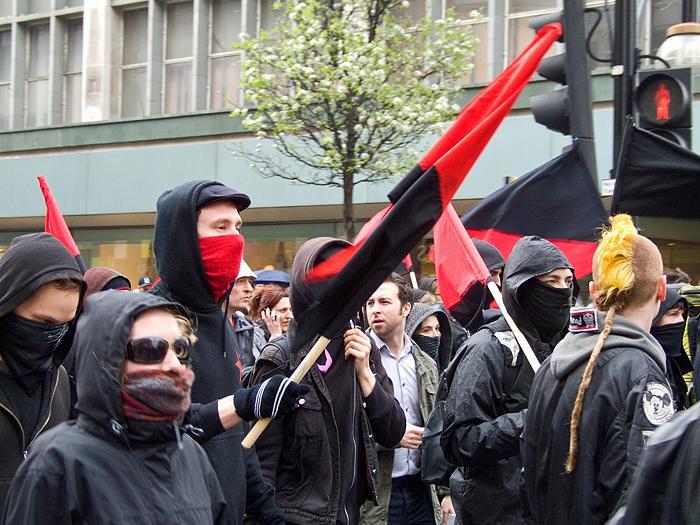 A well attended meeting of Anarchists, including members of London and Provincial English groups, Germans, Italians, and Frenchmen, was HELD on Easter Sunday at the Autonomie Club. The question of what should be the action of English Anarchists on the First of May was discussed at considerable length. The opinion was generally expressed that Anarchists all over the country ought not to miss the opportunity of making good Anarchist propaganda on the First as well as on the Third of May, but should bold public meetings in common with their fellow workers oil the Continent, and explain to the people the real meaning of the May Demonstration. It was agreed that a leaflet setting forth the Anarchist position on the subject should be got out for distribution, and 16s. was collected towards the expenses of producing the same. It was also agreed to send a message of greeting and solidarity to the congress to be held at 'Milan am the 12th of April.

OUR SOCIAL EVENING.-More than a hundred comrades assembled on the evening of March 28th in the tipper chamber of a City coffee tavern, to enjoy the pleasure of each other', society, to renew old friendships and form new ones, to gain inspiration, in an interchange of opinion and in comradeship, for the work lying before us. A glance round the large room, with its pleasant little. tea tables, each brightened by the music of friendly talk, showed Germans and Frenchmen from the Autonomie in conversation with Englishmen from the provinces, Jewish Comrades from Berner Street, laughing and talking with members of the Italian group, the Editor of the Herald of Anarchy in amicable discussion with one of the Freedom staff, friends from Hammersmith Socialist Society, the London Socialist League, the Individualist Anarchist League, all cordially mingling with Anarchist Communists from every group in London. William Morris, from his Sick room, sent a pencil note, regretting his enforced absence. R. Burnie, the new editor of the Commonweal, was also prevented from being present by illness. After tea, Comrades Blackwell, Kropotkin, and Louise Michel made informal speeches. Kropotkin, in view of the next day's Conference, said a few impressive words about the coming 1st 'May. He pointed out that unless the workers all over Europe, and in Great Britain, were unanimous in their Demonstrations that day, they would carry no weight with them. The English workers, if they meant anything, should not wait for the 3rd of May to come out in their thousands. Sunday demonstrations would not tell the capitalists what they ought to know, that the workers had a right to take it holiday when it so pleased them. There was no fear of the Capitalists combining to make a universal lock out if there was a universal coming out on the 1st May, because the universal lock-out would be nothing less than the Social Revolution, Songs were then sung by various friends, including C. Morton, N. E. Tipping, Mrs. Tochatti, and other members of the Hammersmith Choir, &e., and a violin solo was given charmingly by Comrade Marsh. The proceedings were further enlivened by recitations from Gunderson, Jun., and others. So passed a social evening which, we hope, will not be the last of its kind.