The First of May

Anarchist Leader of the Anti-Bolshevik, Anti-Capitalist Partisans of the Ukraine

: Nestor Makhno was the leader of a libertarian peasant and worker army and insurrection in the Ukraine which successfully fought Ukrainian nationalists, the Whites, the Bolsheviks and the bourgeoisie and put anarchism into practice in the years following the Russian Revolution. (From: Intro to Struggle Against the State.)
• "As an individual, man gets back to his authentic personality when he rejects false thinking about life and reduces it to ashes, thereby recovering his real rights. It is through this dual operation of rejection and affirmation that the individual becomes a revolutionary anarchist and a conscious communist." (From: "The ABC of the Revolutionary Anarchist," by Nesto....)
• "Arrest all governors for as long as need be, tear up and burn their laws! Tear down the prisons, once you have annilihated the executioners and eradicated all State power!" (From: "The ABC of the Revolutionary Anarchist," by Nesto....)
• "The free man, on the other hand, has thrown away the trammels of the past together with its lies and brutality. He has buried the rotten corpse of slavery and the notion that the past is better. Man has already partially liberated himself from the fog of lies and brutality, which enslaved him from the day of his birth, from the worship of the bayonet, money, legality, and hypocritical science." (From: "The Anarchist Revolution," by Nestor Makhno.)

The First of May 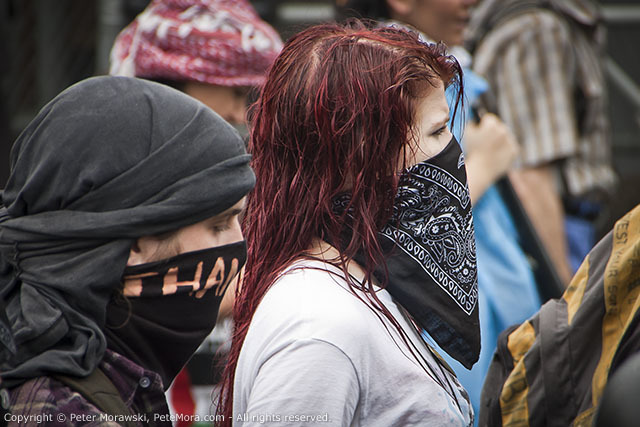 In the socialist world, the first of May is considered the Labor holiday. This is a mistaken description that has so penetrated the lives of the toilers that in many countries that day is indeed celebrated as such. In fact, the first of May is not at all a holiday for the toilers. No, the toilers should not stay in their workshops or in the fields on that date. On that date, toilers all over the world should come together in every village, every town, and organize mass rallies, not to mark that date as statist socialists and especially the Bolsheviks conceive it, but rather to gauge the measure of their strength and assess the possibilities for direct armed struggle against a rotten, cowardly, slave-holding order rooted in violence and falsehood. It is easiest for all the toilers to come together on that historic date, already part of the calendar, and most convenient for them to express their collective will, as well as enter into common discussion of everything related to essential matters of the present and the future.

Over forty years ago, the American workers of Chicago and its environs assembled on the first of May. There they listened to addresses from many socialist orators, and more especially those from anarchist orators, for they fairly gobbled up libertarian ideas and openly sided with the anarchists.

That day those American workers attempted, by organizing themselves, to give expression to their protest against the iniquitous order of the State and Capital of the propertied. That was what the American libertarians Spies, Parsons and others spoke about. It was at this point that this protest rally was interrupted by provocations by the hirelings of Capital and it ended with the massacre of unarmed workers, followed by the arrest and murder of Spies, Parsons and other comrades.

The workers of Chicago and district had not assembled to celebrate the May Day holiday. They had gathered to resolve, in common, the problems of their lives and their struggles.

Today too, wheresoever the toilers have freed themselves from the tutelage of the bourgeoisie and the social democracy linked to it (Menshevik or Bolshevik, it makes no difference) or even try to do so, they regard the first of May as the occasion of a get-together when they will concern themselves with their own affairs and consider the matter of their emancipation. Through these aspirations, they give expression to their solidarity with and regard for the memory of the Chicago martyrs. Thus they sense that the first of May cannot be a holiday for them. So, despite the claims of "professional socialists," tending to portray it as the Feast of Labor, the first of May can be nothing of the sort for conscious workers.

The first of May is the symbol of a new era in the life and struggle of the toilers, an era that each year offers the toilers fresh, increasingly tough and decisive battles against the bourgeoisie, for the freedom and independence wrested from them, for their social ideal.

Image Gallery of The First of May