Workers and the Sphinx

: The originality of his ideas, the imagery and vehemence of his eloquence, his untiring zeal in propagandism, helped too by the natural majesty of his person and by a powerful vitality, gave Bakunin access to all the socialistic revolutionary groups, and his efforts left deep traces everywhere... (From: The Torch of Anarchy.)
• "The great bulk of mankind live in a continual quarrel and apathetic misunderstanding with themselves, they remain unconscious of this, as a rule, until some uncommon occurrence wakes them up out of their sleep, and forces them to reflect on themselves and their surroundings." (From: "The Church, the State, and the Commune," by Mikha....)
• "What is permitted to the State is forbidden to the individual. Such is the maxim of all governments." (From: "The Immorality of the State," by Mikhail Bakunin.)
• "The State is the authority, the rule, and organized power of the possessing class, and the make-believe experts over the life and liberty of masses. The State does not want anything other than the servility of the masses. At once it demands their submission." (From: "The Organization of the International," by Mikhai....)

Workers and the Sphinx

THE WORKERS AND THE SPHINX. 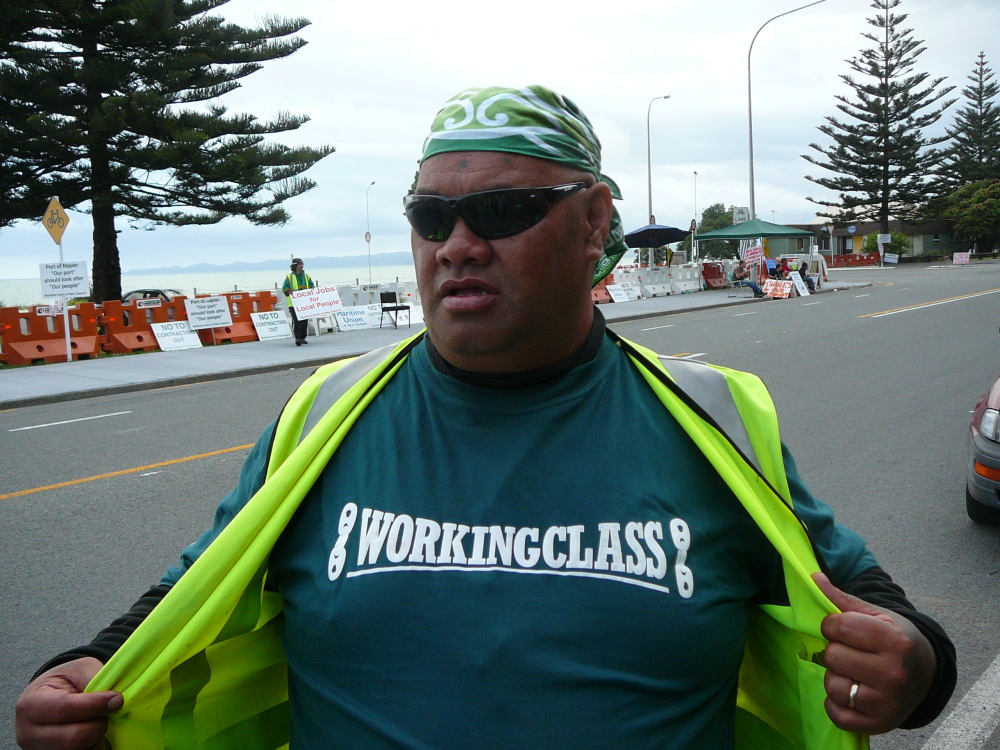 Photo by Maritime Union of New Zealand,
CC BY License

I.The Council of Action claims for each the full product of his labor: meaning by that his complete and equal right to enjoy, in common with his fellow-workers, the full amenities of life and happiness that the collective labor of the People creates. The Council declares that it is wrong for those who produce nothing at all to be able to maintain their insolent riches, since they do so only by the work of others. Like the Apostle Paul,the Council maintains that,if any would not work, neither should he eat."

The Council of Action avers that the right to the noble name of labor belongs exclusively to productive labor. Some years ago, the young King of Portugal paid a visit to his august father-in-law. He was presented to a gathering of the Working Men's Association at Turin: and there, surrounded by workers, he uttered these memorable words:"Gentlemen, the present century is the century of labor. We all labor.I, too,labor for the good of my people."

However flattering this likening of royal labor to working-class labor may appear, we cannot accept it. We must recognize that royal labor is a labor of absorption and not of production. Capitalists, proprietors, contractors also labor : but all such labor is parasitic, since it has no other object than to transfor the real products of labor from the hands of the workers, whose toil creates them, into the possession of those who do not create them, to serve the purpose of further gain and exploitation. Such labor cannot be considered productive labor. In this sense, thieves and brigand labor also. Roughly, they risk every day their liberty and their life. But they do not work.

The Council of Action recognizes intellectual labor-that of men of science-as productive labor.It places the application of science to industry, and the activity of the organizers and administrators of industrial and commercial affairs, in the category of useful or productive labor. But it demands for all men a participation as much in manual labor as in the labor of the mind. The question of how much manual and how much mental labor a person shall contribute to the community must be decided not by the privileges of birth of social status, but by suitability to the natural capacities of each, developed by equal opportunity of education and instruction.

Only thus can class distinctions and privileges disappear and the cant phrase, "the intelligent and working masses" be relegated to deserved oblivion.

2 The Council of Action declares that, so long as the working masses are plunged in the misery of economic servitude, all so-called reforms and even so-called political revolutions of a seeming proletarian character, will avail them nothing. They are condemned to live in a forced ignorance and to accept a slave status by the economic Organization of wage-slave society.

3. Consequently, the Councilof Action urges the workers in their own interests, material as well as moral,- and moral because so completely and thoroughly and equally material for each and all-to subordinate all seeming political questions to definite economic issues. The material means of an education and of an existence really human, are for the proletariat, the first condition of liberty, morality and humanity.

4. The Council of Action declares that the record of pastcenturies, the class legacy of exploitation, as well as contemporary experience, should have convinced the workers that they can expect nosocial amelioration of their lot from the generosity of the privileged classes. There is no justice in class society, since justice can exist only in equality; and equality means the abolition of class and privilege. (Monopoly) There never has been and there never will be a generous or just ruling class. The classes and orders existing in present day-society-clergy, bureaucracy, plutocracy, nobility, bourgeoisie-dispute for power only to consolidate their own strength and to increase their profits within the system. The Council of Action exists to express the truth that, henceforth, the proletariat must take the direction of its own affairs Into its own hands.

5. Once the proletariat clearly understands itself, its solidarity will find expression in the Council of action, or Federated Councils of Action. Then there will remain no power in the world that can resist the workers.

6. To this end, the Council of Action affirms that the proletariat ought to tend, not to the establishment of a new rule or of a new class for its alleged profit as a class, but to the definite abolition of all rule, of every class. Dictator ship, political sectarianism, all spell power, exploitation and injustice. The proletariat, through their Council of Action Organization, must express the Organization of justice liberty, without distinction of race, color, nationality, or faith-all to fully exercise the same duties and enjoy the same rights.

7. The cause of the working class of the entire world is one, is solidarity, across and in spite of all State frontiers. Expressing that common purpose, that complete proletarian identity of interest, the Council of Action proclaims the International oneness of the workers cause, It pioneers the definite International Association of the Workers of the World in a chain of Industrial Associations. The cause of the workers is International because, pushed by an inevitable law which is inherent in it, bourgeois capital in its threefold employment-in industry, commerce and in banking speculation has been tending, since the beginning of the nineteenth century, towards an Organization more and more International and complete, enlarging each day more, and simultaneous in all countries, the abyss which separates the working world from the bourgeois world. From this fact, it results that, for every worker endowed with intelligence and heart, for every proletaire who has vision and action for his companions in misery and servitude; who is conscious of the situation of himself and his class and of his actual interest: the real country is henceforth the International Camp of Labor. And the true local Organization of that camp is the Council of Action.

To every worker, truly worthy of the name, the workers of so-called foreign countries, who suffer and are oppressed as he is oppressed, are infinitely nearer and of more immediate kin than the bourgeoisie of his own country, who enrich themselves to his detriment. Because of this the Council of Action will replace the geographical unit of false democracy, the National State.

By the duty of fraternity, as well as by the call of enlightened self interest, the workers are called upon to establish, organize, and exercise the greatest practical solidarity industrial, communal, provincial, national and international:beginning in their workshop, their home, their tenement,their street, their political group and extending it to all their trade societies, to all their trade propaganda federations, a close industrial solidarity. They ought to observe this solidarity scrupulously, and practice it in all the developments, catastrophes, and incidents of the incessant daily struggle of the labor of the worker against the stolen capital of the bourgeois; all those demands and claims of hours and wages, strikes, and every question that relates to the existence, whether material or moral, of the working people.

The revolt of the workers and the spontaneous organization of human solidarity through the free but involuntary and inevitable federation of all working-class groups into the Council of Action ! This, then, is the answer to the enigma which the Capitalist Sphinx forces us today to solve, threatening to devour us if we do not solve it.

1867
Workers and the Sphinx — Publication.

Image Gallery of Workers and the Sphinx