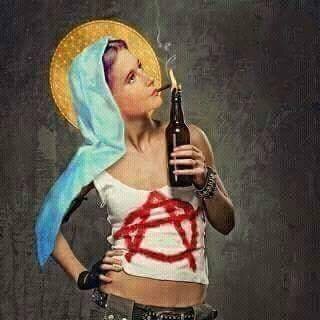 Portrait of the Invisible Woman in Front...

As a child, I dreamed of being the Invisible Woman. I told myself that invisibility would be the only wish that I'd ever be making if one day I would get a rub of the magic lamp. No need to get dressed in the morning to go to school – no need to even go to school! – no need to go to the hairdresser, to be clean and cute, to please and be polite... Sitting at my desk in the classroom, I told myself that as Invisible Woman I'd be profiting to the maximum from my gift, to satisfy all my desires. I fantasied about serving myself with impunity from the candy shelves at the grocery store, going to see all the films at the movie theater and visit all those mysterious places forbidden to little girls, like my mom's room or the boys dres... (From: TheAnarchistLibrary.org.)