A complex man with a controversial legacy, Mohandas Gandhi remains one of the pioneers of civil disobedience as a political weapon and a giant in 20th century anti-colonialism.

From : Center for a Stateless Society 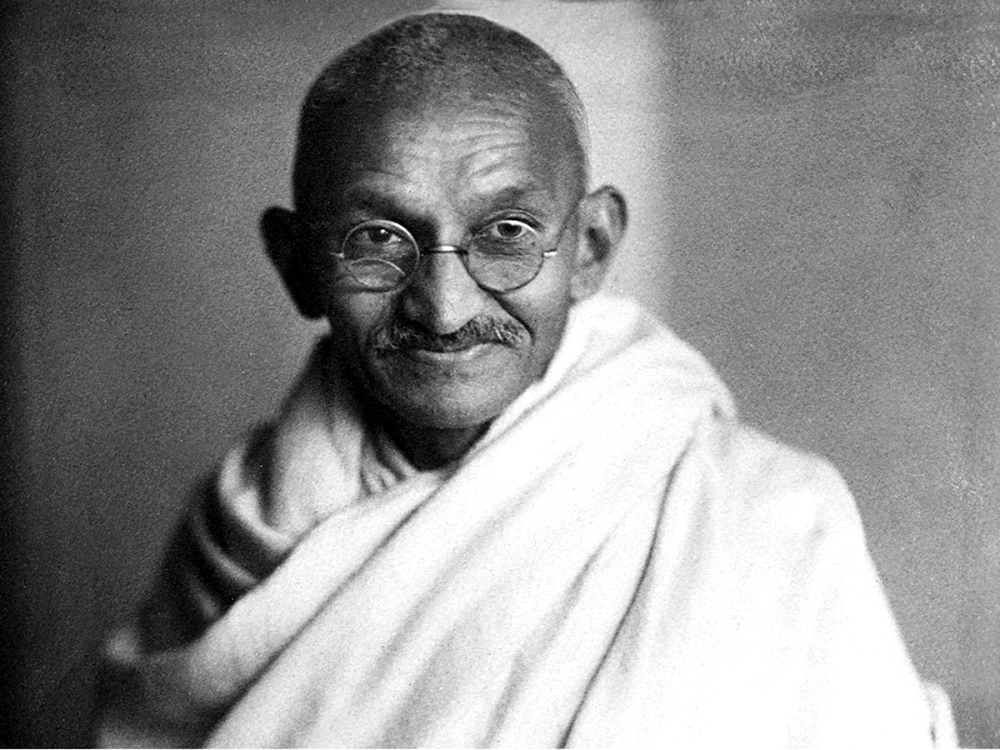 Even though Mahatma Gandhi was pragmatic in many ways his concept of ideal State exhibited anarchist outlook. In his words: "The State represents violence in a concentrated and organized form. The individual has a soul, but as the State is a soulless machine, it can never be weaned from violence to which it owes its very existence."

Gandhi's ideal State was a nonviolent state of enlightened anarchy where social life would remain self-regulated. In that State there is no ruler, no subject, no government or no governed. It is a perfect State consisting of enlightened persons, self-regulated and self-controlled following the principles of nonviolence.

The ideal State of Gandhi was to be governed, by the principle of manual work. Every individual should take up manual work for rendering his/her service to the State and wellbeing of his fellow individuals inside the State. This will promote his service in the direction of welfare of the State.

Village as the unit of State:

The ideal State of Gandhi should consist of villages which are from units. Each village, a component part of the State, should be a village consisting of nonviolent Satyagrahis. They would form the life-breath of an ideal State and preserve and protect nonviolence and truth in their entirety throughout the State.

In an ideal State, authority should be decentralized. Gandhi was against centralization for it leads to absolutism. In decentralizing the authority, Gandhi gave scope to individual liberty. The State should guide the individuals by appealing to their morality. If State resorts to violence, it will damage the enthusiasm, initiative, courage, creativeness and nonÂ­violent mind of individuals and as such, the State cannot prosper.

An individual in Gandhian ideal State should be selfless. He should not accumulate wealth. Accumulation of bread and controlling labor will bring poverty to the State. Thus, in the villages, means of production should be commonly won. This should generate love among the people of the locality binding them in the-common tie of love. Swadeshi should be promoted because that is the characteristic feature of Gandhian ideal State.

Gandhi envisaged that the principle of nonviolence should be the basis of State. Naturally, a democracy that will emerge out of it, will give vent to the majority of opinion. Here, neither property nor status or position but manual work should be the qualification of village republic. It will be a State devoid of corruption and hypocrisy. In a simple statement, democracy will be spiritualized.

To Gandhiji, State is not an end itself; it is rather a means to the end. It is meant to do greatest good of greatest number of the people. Neither force nor absolute sovereignty is the basis of State. Gandhi's ideal of a welfare State is always ready to promote the condition of its subjects.

Gandhiji vehemently opposed the parliamentary democracy of western type. He criticized the universal suffrage system of the election held in western countries. The Parliament is not stable to the change of ministry from time to time. Further, the Prime Minister is always concerned about his own interest and the interest of his party members for retaining his power. So, Gandhi criticized it and as such, western democracy has no place in Gandhi's welfare State.

Following the doctrine of Gita, Mahatma Gandhi told that the Varna system should form the basis of the ideal State. As Varna is related to birth, every Varna should render its labor to the betterment of the State. That will result in non-possession and economic equality. This will bring complete social and economic equality.

Dharma is a novel aspect of Gandhi's ideal state. It is not a religion of a particular sector creed; rather it is moral and ethical code of conduct which preserves the culture of the nation. Further, it holds together the social order and brings harmony among the people uplifting their potentialities.

Gandhiji prescribed for a minimum intervention of police force in the activities of the State. To him, crime is a disease and it must be cured. Accordingly, appeal to the conscience of the criminals will change their mind but not the police atrocity. Out and out, the State should be governed by the principle of Ahimsa where virtually, there is no place of coherence.

Emphasis on duty and resorting to natural means:

Gandhiji put emphasis on duty rather than rights. If one becomes cautious for his duties, then rights will automatically be taken due care by the State. Rights are nothing but opportunities for self-realization. It is the link of one's spiritual unity with others by serving them. The role of doctors and machines was to be ignored and traditional method it to be adopted for curing the diseases.

Gandhiji laid emphasis on basic education. By that he wanted to spread vocational education in the nook and corner of the country. Gandhi had realized that this will improve small-scale industry, which in turn, will bring a self-sufficient economy for every country.

Thus, Gandhi's concept of ideal State was based on nonviolence and truth. Spiritualized democracy, emphasis on duties, considering State as a means to an id etc. were some of the factors which made Gandhi's ideal State distinct.

To Gandhi. I have just received your very interesting letter, which gave me much pleasure. God help our dear brothers and coworkers in the Transvaal! Among us, too, this fight between gentleness and brutality, between humility and love and pride and violence, makes itself ever more strongly felt, especially in a sharp collision between religious duty and the State laws, expressed by refusals to perform military service. Such refusals occur more and more often. I wrote the 'Letter to a Hindu', and am very pleased to have it translated. The Moscow people will let you know the title of the book on Krishna. As regards 're-birth' I for my part should not omit anything, for I think that faith in a re-birth will never restrain mankind as much a... (From: Anarchy Archives.)
march
russian
employment
humility
legal
life
art
submissive
duty
spiritual

Letter to a Hindu : The Subjection of India-Its Ca...

Introduction by M. K. GANDHI The letter printed below is a translation of Tolstoy's letter written in Russian in reply to one from the Editor of Free Hindustan. After having passed from hand to hand, this letter at last came into my possession through a friend who asked me, as one much interested in Tolstoy's writings, whether I thought it worth publishing. I at once replied in the affirmative, and told him I should translate it myself into Gujarati and induce others' to translate and publish it in various Indian vernaculars. The letter as received by me was a type-written copy. It was therefore referred to the author, who confirmed it as his and kindly granted me permission to print it. To me, as a humble follower of that great teache... (From: Anarchy Archives.)
english
indians
bondage
freedom-loving
modern
morality
taxes
sophistries
law courts
confucianism

08. MY WRITINGS MY HESITANCY in speech, which was once an annoyance, is now a pleasure. Its greatest benefit has been that it has taught me the economy of words. I have naturally formed the habit of restraining my thoughts. And I can now give myself the certificate that a thoughtless word hardly ever escapes my tongue or pen. I do not recollect ever having had to regret anything in my speech or writing. I have thus been spared many a mishap and waste of time. (A, p45) In the very first month of Indian Opinion, I realized that the sole aim of journalism should be service. The newspaper press is a great power, but just as an unchained torrent of water submerges whole country sides and devastates crops, even so an uncontrolled pen serves b... (From: TheAnarchistLibrary.org.)

What is Authority? (Wilbur Translation)

Translator’s note This passage is generally known as part of “God and the State” (Dieu et l’État, first published in 1882), but it appears in Bakunin’s manuscript as part of “Sophismes historiques de l’école doctrinaire des communistes allemands,” the second section of the unfinished book L’Empire Knouto-Germanique et la Révolution Sociale (The Knouto-Germanic Empire and the Social Revolution.) This new translation seeks to clarify some passages that may appear contradictory in existing translations. In particularly the verb repousser, which previous translators have tended to simply render as “reject,” has been brought closer to its literal sense of ... (From: TheAnarchistLibrary.org.)

From : "A Letter to a Hindu: The Subjection of India- Its Cause and Cure," by Leo Tolstoy, With an Introduction by M. K. Gandhi, December 14th, 1908

From : "A Letter to a Hindu: The Subjection of India- Its Cause and Cure," by Leo Tolstoy, With an Introduction by M. K. Gandhi, December 14th, 1908