He dies "In a prison courtyard an officer stepped up and struck him across the face, the signal for a savage massacre. Set upon by the troops, Landauer was beaten with trutcheons and rifle butts, kicked, stomped and trampled upon. 'Kill me, then!' he exclaimed, 'to think that you are human beings!" At that he was shot to death. 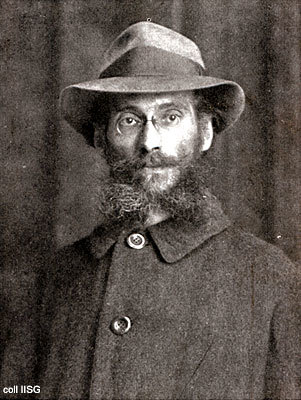 Gustav Landauer was one of the leading theorists on anarchism in Germany at the end of the 19th and the beginning of the 20th century. He was an advocate of social anarchism and an avowed pacifist. In 1919, during the German Revolution, he was briefly Commissioner of Enlightenment and Public Instruction of the short-lived Bavarian Soviet Republic. He was killed when this Republic was overthrown.

Journal for Anarchism and Socialism — this is what our paper says. Anarchism is the goal that we pursue: the absence of domination and of the state; the freedom of the individual. Socialism is the means by which we want to reach and secure this freedom: solidarity, sharing, and cooperative labor. Some people say that we have turned things upside down by making anarchism our goal and socialism our means. They see anarchy as something negative, as the absence of institutions, while socialism indicates a positive social order. They think that the positive part should constitute the goal, and the negative the means that can help us to destroy whatever keeps us from attaining the goal. These people fail to understand that anarchy is not ... (From: TheAnarchistLibrary.org.)

Why do so many of today’s skeptics and rebels, these humanists and futurists, among whom I count myself identify themselves as anarchists? Why do these apostles of enlightenment who wish not only to cultivate a new consciousness but also to create a new social form, have the closest ties to the most radical group which advocates relentless class war? What are the characteristics of Anarchism in Germany? In particular, is it a working class movement; and will it remain so? I’ve decided to answer these particular questions here. Not in order to propagandize for Anarchism; both the publishers and the readers of Die Zukunft, a publication with a different agenda, have the right to oppose any such attempt. I do not consider it my cal... (From: TheAnarchistLibrary.org.)

3 So our time stands between two ages. What does it look like? A cohesive spirit — yes! yes! the word spirit does occur often in this book. Perhaps it happens because the men of our time, especially the so-called socialists, say “spirit” so seldom and act correspondingly. They do not act spiritually and so they do nothing real and practical; and how could they do anything real if they think so little! There is no cohesive spirit that impels men to spontaneously collaborate in matters of common interest, in the production and distribution of consumer goods. There is no spirit hovering above all work above every industrious impulse like the song of the lark out of the skies or the far-away song of invisible choruses, the... (From: TheAnarchistLibrary.org.)

A pale, nervous, sick, and weak man sits at his writing desk. He scribbles notes on a sheet of paper. He is composing a symphony. He works diligently, using of all the trade secrets that he has learned. When the symphony is performed, a hundred and fifty men play in the orchestra; in the third movement, there are ten timpani, fifteen percussion instruments, and an organ; in the final movement, an eight part chorus of five hundred people is added as well as an extra orchestra of fifes and drums. The audience is mesmerized by the enormous force and the imposing vigor. Our statesmen and politicians - and increasingly our entire ruling class - remind us of this composer who possesses no actual power, but allows the masses to appear powerful. O... (From: TheAnarchistLibrary.org.)