: There have almost certainly been better anarchist writers, more skilled anarchist organizers, anarchists who have sacrificed more for their beliefs. Perhaps though, Malatesta is celebrated because he combined all of these so well, exemplifying thought expressed in deed... (From: Cunningham Bio.)
• "Our task then is to make, and to help others make, the revolution by taking advantage of every opportunity and all available forces: advancing the revolution as much as possible in its constructive as well as destructive role, and always remaining opposed to the formation of any government, either ignoring it or combating it to the limits of our capacities." (From: "The Anarchist Revolution," by Errico Malatesta.)
• "And tomorrow, in the revolution, we must play an active part in the necessary physical struggle, seeking to make it as radical as possible, in order to destroy all the repressive forces of the government and to induce the people to take possession of the land, homes, transport, factories, mines, and of all existing goods, and organize themselves so that there is a just distribution immediately of food products." (From: "The Anarchist Revolution," by Errico Malatesta.)
• "If it is true that the law of Nature is Harmony, I suggest one would be entitled to ask why Nature has waited for anarchists to be born, and goes on waiting for them to triumph, in order to destroy the terrible and destructive conflicts from which mankind has already suffered. Would one not be closer to the truth in saying that anarchy is the struggle, in human society, against the disharmonies of Nature?" (From: "Peter Kropotkin - Recollections and Criticisms of....)

Rejections of being accused of supporting the constituent assembly, tactics of kill-all or take-nothing against the state, and we should focus on bringing our ideas into reality more than what accusers may say. 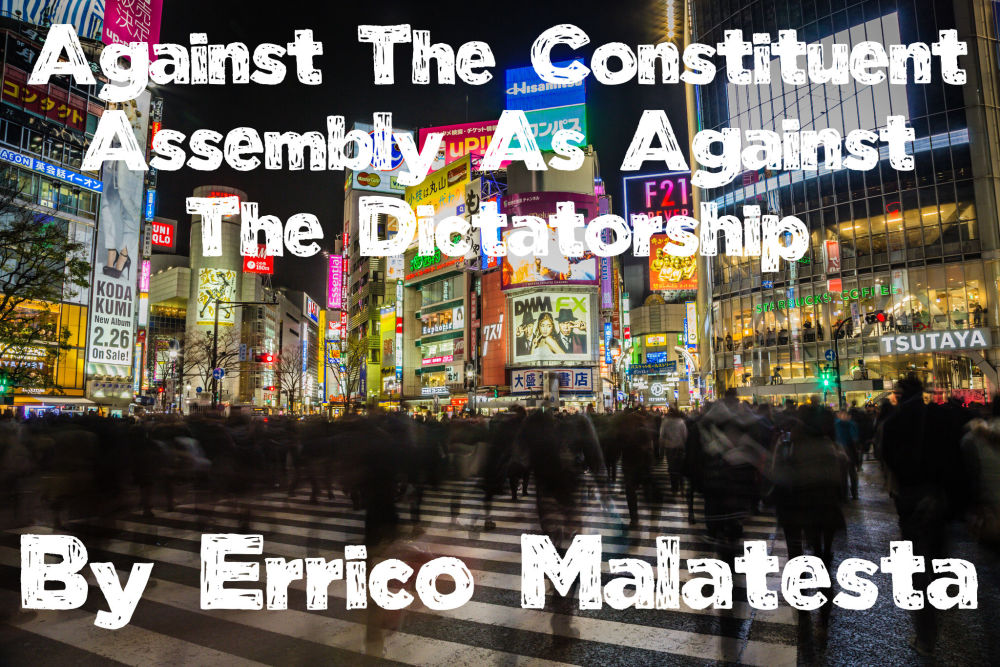 After years without seeing the Martello, the issue of June 21 fell into my hands. I found in it an article signed X., which talks, in a more or less imaginary way, about an insurrectionary project, which was allegedly promoted by myself, Giulietti and... D’Annunzio. From the article it appears that someone else who writes under the name of Ursus had previously written about such events, but I could not manage to find his article.

Never mind. I cannot tell now how the events referred to by X. and Ursus actually happened, because this is not the right time to let the public, and thus the police, know what one may have done or attempted to do. Also, I could not betray the trust that may have been put in me by persons, who would not like to be named now. I can be surprised, though, that these X. and Ursus, moved by the desire to find support to their tactical thesis, have not realized how tactless it is to involve someone who usually does not receive newspapers, and thus does not know what is said about him and cannot reply — in addition to their feeling no duty, in a personal matter, to take at least responsibility for what they say and sign with their real names.

What I care about — and what makes me take the trouble of pointing out said articles — is protesting the completely false statement that, at any moment whatsoever of my political activity, I may have been a supporter of the Constituent Assembly. The issue bears such a theoretical and practical relevance, that it could become topical any moment, and it cannot leave cold anyone who calls himself anarchist and wants to act like an anarchist in any given situation.

To be precise, at the time when the events badly recollected by X. and Ursus occurred, I was striving, with my words and writings, to fight the faith and hope put by many subversives (obviously non-anarchist) in the possibility of a Constituent Assembly.

At that time I claimed, as I have always done before and after, that a Constituent Assembly is the means used by the privileged classes, when a dictatorship is not possible, either to prevent a revolution, or, when a revolution has already broken out, to stop its progress with the excuse of legalizing it, and to take back as much as possible of the gains that the people had made during the insurrectional period.

The Constituent Assembly, with its making asleep and smothering, and the dictatorship, with its crushing and killing, are the two dangers that threaten any revolution. Anarchists must aim their efforts against them.

Of course, since we are a relatively small minority, it is quite possible, and even likely, that the next upheaval will end up in the convocation of a Constituent Assembly. However, this would not happen with our participation and cooperation. It would happen against our will, despite our efforts, simply because we will not have been strong enough to prevent it. In this case, we will have to be as distrustful and inflexibly opposed to a Constituent Assembly as we have always been to ordinary parliaments and any other legislative body.

Let this be quite clear. I am not an advocate of the ‘all or nothing’ theory. I believe that nobody actually behaves in such a way as implied by that theory: it would be impossible.

This is just a slogan used by many to warn about the illusion of petty reforms and alleged concessions from government and masters, and to always remind of the necessity and urgency of the revolutionary act: it is a phrase that can serve, if loosely interpreted, as an incentive to a fight without quarter against every kind of oppressors and exploiters. However, if taken literally, it is plain nonsense.

The ‘all’ is the ideal that gets farther and wider as progresses are made, and therefore it can never be reached. The ‘nothing’ would be some abysmally uncivilized state, or at least a supine submission to the present oppression.

I believe that one must take all that can be taken, whether much or little: do whatever is possible today, while always fighting to make possible what today seems impossible.

For instance, if today we cannot get rid of every kind of government, this is not a good reason for taking no interest in defending the few acquired liberties and fighting to gain more of those. If now we cannot completely abolish the capitalist system and the resulting exploitation of the workers, this is no good reason to quit fighting to obtain higher salaries and better working conditions. If we cannot abolish commerce and replace it with the direct exchange among producers, this is no good reason for not seeking the means to escape the exploitation of traders and profiteers as much as possible. If the oppressors’ power and the state of the public opinion prevent now from abolishing the prisons and providing to any defense against wrongdoers with more humane means, not for this we would lose interest in an action for abolishing death penalty, life imprisonment, close confinement and, in general, the most ferocious means of repression by which what is called social justice, but actually amounts to a barbarian revenge, is exercised. If we cannot abolish the police, not for this we would allow, without protesting and resisting, that the policemen beat the prisoners and allow themselves all sorts of excesses, overstepping the limit prescribed to them by the laws in force themselves...

I am breaking off here, as there are thousands and thousands of cases, both in individual and social life, in which, being unable to obtain ‘all’, one has to try and get as much as possible.

At this point, the question of fundamental importance arises about the best way of defending what one has got and fighting to obtain more; for there is one way that weakens and kills the spirit of independence and the consciousness of one’s own right, thus compromising the future and the present itself, while there is another way that uses every tiny victory to make greater demands, thus preparing the minds and the environment to the longed complete emancipation.

What constitutes the characteristic, the raison d'etre of anarchism is the conviction that the governments — dictatorships, parliaments, etc. — are always instruments of conservation, reaction, oppression; and freedom, justice, well-being for everyone must come from the fight against authority, from free enterprise and free agreement among individuals and groups.

One problem worries many anarchists nowadays, and rightly so.

As they find it insufficient to work on abstract propaganda and revolutionary technical preparation, which is not always possible and is done without knowing when it will be fruitful, they look for something practical to do here and now, in order to accomplish as much as possible of our ideas, despite the adverse conditions; something that morally and materially helps the anarchists themselves and at the same time serves as an example, a school, an experimental field.

Practical proposals are coming from various sides. They are all good to me, if they appeal to free initiative and to a spirit of solidarity and justice, and tend to take individuals away from the domination of the government and the master. And to avoid wasting time in continuously recurring discussions that never bring new facts or arguments, I would encourage those who have a project to try to immediately accomplish it, as soon as they find support from the minimal necessary number of participants, without waiting, usually in vain, for the support of all or many: — experience will show whether those projects were workable, and it will let the vital ones survive and thrive.

Let everyone try the paths they deem best and fittest to their temperament, both today with respect to the little things that can be done in the present environment, and tomorrow in the vast ground that the revolution will offer to our activity. In any case, what is logically mandatory for us all, if we do not want to stop being truly anarchist, is to never surrender our freedom in the hands of an individual or class dictatorship, a despot or a Constituent Assembly; for what depends on us, our freedom must find its foundation in the equal freedom of all.

1 I will soon come back to the issue of money.

September 4, 1930
Against The Constituent Assembly As Against The Dictatorship — Publication.