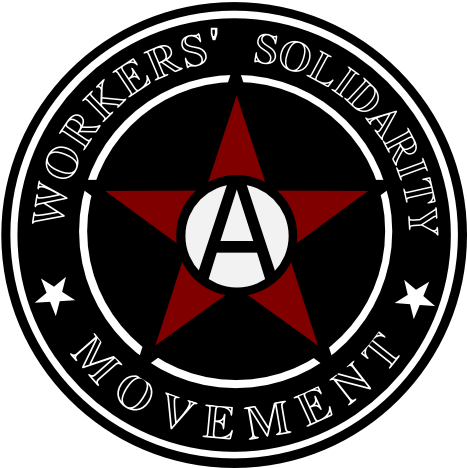 Journal for Anarchism and Socialism — this is what our paper says.

Anarchism is the goal that we pursue: the absence of domination and of the state; the freedom of the individual. Socialism is the means by which we want to reach and secure this freedom: solidarity, sharing, and cooperative labor.

Some people say that we have turned things upside down by making anarchism our goal and socialism our means. They see anarchy as something negative, as the absence of institutions, while socialism indicates a positive social order. They think that the positive part should constitute the goal, and the negative the means that can help us to destroy whatever keeps us from attaining the goal. These people fail to understand that anarchy is not just an abstract concept of freedom but that our notions of a free life and of free activity include much that is concrete and positive. There will be work — purposeful and fairly distributed; but it will only be a means to develop and strengthen our rich natural forces, to impact our fellow human beings, culture, and nature, and to enjoy society’s riches to the fullest.

It is mandatory to fight the false social democratic claims that anarchism and socialism are as opposed as “fire and water.” Those who make such claims usually argue thus: Socialism means “socialization.” This means in turn that society — a vague term usually encompassing all human beings who inhabit the earth — will be amalgamated, unified, and centralized. The so-called “interests of humanity” become the highest law, and the specific interests of certain social groups and individuals become secondary. Anarchism, on the other hand, means individualism, i.e., the desire of individuals to assert power without limits; it spells atomization and egoism. As a result, we have incompatible opposites: socialization and individual sacrifice on the one hand; individualization and self-centeredness on the other.

I think that it is possible to illustrate the shortcomings of these assumptions by a simple allegory. Let us imagine a town that experiences both sunshine and rain. If someone suggested that the only way to protect the town against rain is to build a huge roof that covers everything and that will always be there whether it rains or not, then this would be a “socialist” solution according to the social democrats. On the other hand, if someone suggested that, in the case of rain, each individual should grab one of the town’s umbrellas and that those who come too late are simply unlucky, then this would be an “anarchist” solution. For us anarchist socialists both solutions appear ridiculous. Neither do we want to force all individuals under a common roof nor do we want to end up in fistfights over umbrellas. When it is useful, we can share a common roof — as long as it can be removed when it is not useful. At the same time, all individuals can have their own umbrellas, as long as they know how to handle them. And with regard to those who want to get wet — well, we will not force them to stay dry.

Instead of both the national state and of the world state that the social democrats dream of, we anarchists want a free order of multiple, intertwined, colorful associations and companies. This order will be based upon the principle that all individuals are closest to their own interests, and that their shirts are closer to them than their jackets. It will rarely be necessary to address all of humankind in order to deal with a specific problem. Hence, there is no need for a global parliament or any other global institution.

There are affairs that concern all of humankind, but in such cases the different groups will find ways to reach common solutions. Let us take the matter of international transport and its intricate train schedules as an example. Here, the representatives of each country find solutions despite the absence of a higher coordinating power. The reason is simple: necessity demands it. It is hence hardly surprising that I find the Reichskursbuch the only bureaucratic publication worth reading. [1] I am convinced that this book will receive more honors in the future than the law books of all nations combined!

Other affairs that will need global attention are measurements, scientific and technical terms, and statistics, which are of great importance for economic planning and other purposes. (Although, they are much less important than what the social democrats think, who want to make them the throne on which to build the people’s global domination.) Those who are not condemned to ignorance by the conditions that the powerful force upon them will soon make appropriate use of statistics without any global institution. There will probably be a global organization of some kind that compiles and compares different statistical data, but it will not play a very significant role and will never constitute a powerful political force.

Are there common interests within a nation? There are some: language, literature, arts, customs, and rituals all have specific national characteristics. However, in a world without domination, without “annexed territories” and the concept of “national land” (land that has to be defended and enlarged), such interests will not mean what they mean today. The concept of “national labor,” for example, will disappear altogether. Labor will be structured in ways that do not follow language or ethnography. For labor conditions in local communities, both geography and geology are very important. But what do our nation states have to do with these realities? (As far as the differences in language go, they pose much less of a challenge than generally imagined.)

Speaking of labor, there are different currents within the anarchist camp. Some anarchists propagate the right to free consumption. They believe that all individuals shall produce according to their abilities and consume according to their needs. They maintain that no one but the individual can know what his or her abilities and needs are. The vision is to have storehouses filled by voluntary labor according to people’s needs. The labor will be done because each individual will understand that the satisfaction of everyone’s needs demands a collective effort. Statistics and information on labor conditions in specific communities will provide the guidelines for how much to produce and for how much work will be necessary, taking into account both the technology and the overall workforce. The need for laborers will be announced publicly to all those who are eligible. Those who refuse to work — entirely or partly — even though they could, will be socially ostracized.

I think that this is an accurate and unbiased summary of the ideas of the communists. I now want to explain why I consider these notions of labor organization insufficient and unjust.

I do not deem them impossible. I believe that communism and the right to free consumption can exist. However, I do believe that many people will choose not to work. Social ostracization will matter little to them — they can be assured of mutual support and respect among their peers.

This is not the biggest problem though. The biggest problem is that a new moral authority will be created; a moral authority that declares those the “best human beings” who work the hardest, who are ready to do the most difficult and the dirtiest work, and who make sacrifices for the weak, the lazy, and the freeloaders. The constraint of such a morality and the social rewards it promises will be far worse and far more dangerous than the most acceptable constraint we know: egoism. I have reached this opinion after a lot of contemplation. A society based on the constraint of morality will be far more one-dimensional and unjust than a society based on the constraint of self-interest.

Anarchists who share this opinion see a connection between the labor of individuals and their consumption. They want to organize labor on the basis of natural egoism. This means that those who work will primarily work for themselves. In other words, those who join a particular line of work will do so because they expect certain personal advantages from it; those who work more than others will do so because they have more needs to satisfy; those who do the most difficult and the dirtiest work (work that will always have to be done, even if in a less gruesome manner than today) will do so because — contrary to today — this work will be the most valued and highest paid.

The critique of this kind of organization of labor is mainly three-fold: first, one sees it as an injustice against the intellectually or physically weak; second, one is afraid that individual riches will be accumulated and that new forms of exploitation will arise; third, one is concerned that an exclusive class of producers will gain and defend privileges.

I consider all of these concerns unfounded. It is true that there will be a differentiation of labor. However, if people are well educated and their talents well nourished, then everyone will easily find work that suits his or her qualifications. Some will find intellectual labor suitable for them, some manual labor, etc. Those who are unable to work — the disabled, the old — will be provided for in many ways, just like children are provided for. The principle of mutual aid will be central.

It will be impossible for individuals to accumulate riches leading to exploitation, as everyone in an anarchist society will understand that common usage of the land and the means of production is in their individual interest. As a result, those who work the hardest might gain advantages in terms of personal property, but they will not gain any means of exploitation.

Finally, no group would gain anything by becoming exclusive. They would instantly be boycotted. If a certain group were ever to gain an advantage in a certain area of production, new producers would appear and it would not be long before a fair balance was reestablished. When workers come and go freely and when there is truly free competition among equal men, then permanent inequalities are rendered impossible.

It is not inconceivable that the organization of labor, as I have outlined it above, might take two forms simultaneously in different regions or in different fields of labor. Practical experience will soon determine the form that is most feasible. In any case, the goal of both forms is the same: the freedom of the individual on the basis of economic solidarity. There is no reason to argue about the organizational details of the future society. It is much more important to combine our forces to establish the social conditions allowing for the practical experiences that will determine these matters.

Anarchy is no lifeless system of ready-made thoughts. Anarchy is life; the life that awaits us after we have freed ourselves from the yoke.