: There have almost certainly been better anarchist writers, more skilled anarchist organizers, anarchists who have sacrificed more for their beliefs. Perhaps though, Malatesta is celebrated because he combined all of these so well, exemplifying thought expressed in deed... (From: Cunningham Bio.)
• "If it is true that the law of Nature is Harmony, I suggest one would be entitled to ask why Nature has waited for anarchists to be born, and goes on waiting for them to triumph, in order to destroy the terrible and destructive conflicts from which mankind has already suffered. Would one not be closer to the truth in saying that anarchy is the struggle, in human society, against the disharmonies of Nature?" (From: "Peter Kropotkin - Recollections and Criticisms of....)
• "Let there be as much class struggle as one wishes, if by class struggle one means the struggle of the exploited against the exploiters for the abolition of exploitation. That struggle is a way of moral and material elevation, and it is the main revolutionary force that can be relied on." (From: "About My Trial: Class Struggle or Class Hatred?,"....)
• "...the oppressed are always in a state of legitimate self-defense, and have always the right to attack the oppressors." (From: "Anarchists Have Forgotten Their Principles," by E....) 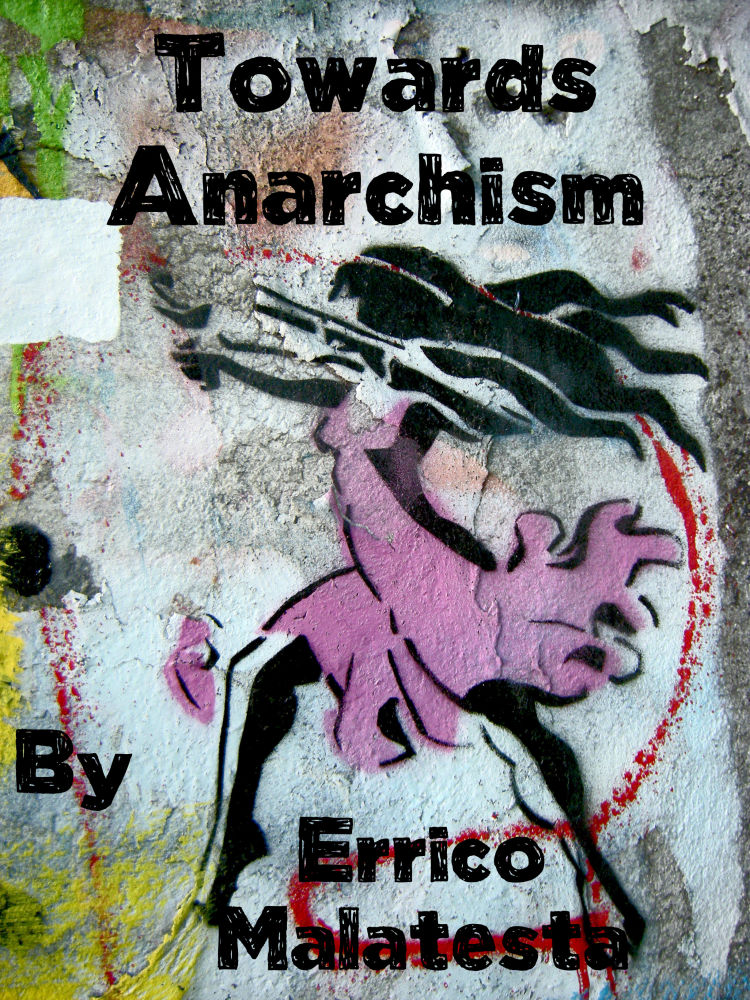 It is a general opinion that we, because we call ourselves revolutionists, expect Anarchism to come with one stroke - as the immediate result of an insurrection which violently attacks all that which exists and which replaces all with institutions that are really new. And to tell the truth this idea is not lacking among some comrades who also conceive the revolution in such a manner.

This prejudice explains why so many honest opponents believe Anarchism a thing impossible; and it also explains why some comrades, disgusted with the present moral condition of the people and seeing that Anarchism cannot come about soon, waver between an extreme dogmatism which blinds them to the realities of life and an opportunism which practically makes them forget that they are Anarchists and that for Anarchism they should struggle.

Of course the triumph of Anarchism cannot be the consequence of a miracle; it cannot come about in contradiction to the laws of development (an axiom of evolution that nothing occurs without sufficient cause), and nothing can be accomplished without adequate means.

If we should want to substitute one government for another, that is, impose our desires upon others, it would only be necessary to combine the material forces needed to resist the actual oppressors and put ourselves in their place.

But we do not want this; we want Anarchism which is a society based on free and voluntary accord - a society in which no one can force his wishes on another and in which everyone can do as he pleases and together all will voluntarily contribute to the well-being of the community. But because of this Anarchism will not have definitively and universally triumphed until all men will not only not want to be commanded but will not want to command; nor will Anarchism have succeeded unless they will have understood the advantage of solidarity and know how to organize a plan of social life wherein there will no longer be traces of violence and imposition. And as the conscience, determination, and capacity of men continuously develop and find means of expression in the gradual modification of the new environment and in the realization of the desires in proportion to their being formed and becoming imperious, so it is with Anarchism; Anarchism cannot come but little by little slowly, but surely, growing in intensity and extension.

Anarchism is the abolition of exploitation and oppression of man by man, that is, the abolition of private property and government; Anarchism is the destruction of misery, of superstitions, of hatred. Therefore, every blow given to the institutions of private property and to the government, every exaltation of the conscience of man, every disruption of the present conditions, every lie unmasked, every part of human activity taken away from the control of the authorities, every augmentation of the spirit of solidarity and initiative, is a step towards Anarchism.

The problem lies in knowing how to choose the road that really approaches the realization of the ideal and in not confusing the real progress with hypocritical reforms. For with the pretext of obtaining immediate ameliorations these false reforms tend to distract the masses from the struggle against authority and capitalism; they serve to paralyze their actions and make them hope that something can be attained through the kindness of the exploiters and governments. The problem lies in knowing how to use the little power we have - that we go on achieving, in the most economical way, more prestige for our goal.

There is in every country a government which, with brutal force, imposes its laws on all; it compels all to be subjected to exploitation and to maintain, whether they like it or not, the existing institutions. It forbids the minority groups to actuate their ideas, and prevents the social organizations in general from modifying themselves according to, and with, the modifications of public opinion. The normal peaceful course of evolution is arrested by violence, and thus with violence it is necessary to reopen that course. It is for this reason that we want a violent revolution today; and we shall want it always - so long as man is subject to the imposition of things contrary to his natural desires. Take away the governmental violence and ours would have no reason to exist.

We cannot as yet overthrow the prevailing government; perhaps tomorrow from the ruins of the present government we cannot prevent the arising of another similar one. But this does not hinder us, nor will it tomorrow, from resisting whatever form of authority - refusing always to submit to its laws whenever possible, and constantly using force to oppose force.

Every weakening of whatever kind of authority, each accession of liberty will be a progress towards Anarchism; always it should be conquered - never asked for; always it should serve to give us greater strength in the struggle; always it should make us consider the state as an enemy with whom we should never make peace; always it should make us remember well that the decrease of the ills produced by the government consists in the decrease of its attributions and powers, and the resulting terms should be determined not by those who governed but by those were governed. By government we mean any person or group of persons in the state, country, community, or association who has the right to make lows and inflict them upon those who do not want them.

We cannot as yet abolish private property; we cannot regulate the means of production which is necessary to work freely; perhaps we shall not be able to do so in the next insurrectional movement. But this does not prevent us now, or will it in the future, from continually opposing capitalism or any other form of despotism. And each victory, however small, gained by the workers against their exploiters, each decrease of profit, every bit of wealth taken from the individual owners and put at the disposal of all, shall be a progress - a forward step towards Anarchism. Always it should serve to enlarge the claims of the workers and to intensify the struggle; always it should be accepted as a victory over an enemy and not as a concession for which we should be thankful; always we should remain firm in our resolution to take with force, as soon as it will be possible, those means which the private owners, protected by the government, have stolen from the workers.

The right of force having disappeared, the means of production being placed under the management of whoever wants to produce, the result must be the fruit of a peaceful evolution.

Anarchism could not be, nor would it ever be if not for these few who want it and want it only in those things they can accomplish without the cooperation of the non-anarchists. This does not necessarily mean that the ideal of Anarchism will make little or no progress, for little by little its ideas will extend to more men and more things until it will have embraced all mankind and all life's manifestations.

Having overthrown the government and all the existing dangerous institutions which with force it defends, having conquered complete freedom for all and with it the means of regulating labor without which liberty would be a lie, and while we are struggling to arrive at this point, we do not intend to destroy those things which we little by little will reconstruct.

For example, there functions in the present society the service- of supplying food. This is being done badly, chaotically, with great waste of energy and material and with capitalist interests in view; but after all, one way or another we must eat. It would be absurd to want to disorganize the system of producing and distributing food unless we could substitute for it something better and more just.

There exists a postal service. We have thousands of criticisms to make, but in the meantime we use it to send our letters, and shall continue to use it, suffering all its faults, until we shall be able to correct or replace it.

There are schools, but how badly they function. But because of this we do not allow our children to remain in ignorance - refusing their learning to read and write.

Meanwhile we wait and struggle for a time when we shall be able to organize a system of model schools to accommodate all.

From this we can see that, to arrive at Anarchism, material force is not the only thing to make a revolution; it is essential that the workers, grouped according to the various branches of production, place themselves in a position that will insure the proper functioning of their social life - without the aid or need of capitalists or governments.

And we see also that the Anarchist ideals are far from being in contradiction, as the "scientific socialists" claim, to the laws of evolution as proved by science; they are a conception which fits these laws perfectly; they are the experimental system brought from the field of research to that of social realization.

Image Gallery of Towards Anarchism