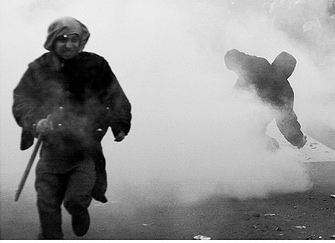 A man condemned to lifelong imprisonment had escaped from his confinement and was seeking safety in headlong flight. His pursuers were close at his heels. He was running with all his might, and the distance between him and them was becoming steadily greater.

Suddenly he sees before him a stream with precipitous banks, a narrow but deep torrent, . . . . and he cannot swim.

But the stream is bridged by a thin plank, half-rotten with age. The fugitive has already one foot upon it. And there, by chance, stand his dearest friend and his bitterest foe.

The enemy uttered no sound, and merely folded his arms. The friend, on the contrary, cried out at the top of his voice:

"For God's sake, consider, foolhardy man, what you are doing! Do you not see that the plank is quite rotten? It will give way under your weight, and you will inevitably be lost."

"But there is no other way," groaned the despairing fugitive, "and my pursuers–listen, they are close at hand." And he stepped forward to cross the plank.

"I cannot permit it. No, I cannot allow you thus to step to your destruction," cried the zealous friend, and even from beneath the feet of the fugitive he tore the plank away.

The fugitive, in despair, plunged into the rushing torrent and was drowned.

The foe smiled with a bitter satisfaction, and passed on his way. But the friend sat down sadly by the bank, and bewailed the loss of his dearest friend. It never entered his head for a moment to consider himself to blame for the death.

"After all," he presently thought, "he must have passed his whole life in a horrible dungeon. At least he is delivered from all his troubles. He is now better off, and it is clear that an all-wise providence had so intended it. And yet, from a merely human point of view, what a pity it is."

And so the pious soul continued, weeping hot tears over his unfortunate friend.

Image Gallery of Friend and Foe