The Idea of Good Government

: There have almost certainly been better anarchist writers, more skilled anarchist organizers, anarchists who have sacrificed more for their beliefs. Perhaps though, Malatesta is celebrated because he combined all of these so well, exemplifying thought expressed in deed... (From: Cunningham Bio.)
• "Government is the consequence of the spirit of domination and violence with which some men have imposed themselves on other, and is at the same time the creature as well as the creator of privilege and its natural defender." (From: "Anarchist Propaganda," by Errico Malatesta.)
• "Our task then is to make, and to help others make, the revolution by taking advantage of every opportunity and all available forces: advancing the revolution as much as possible in its constructive as well as destructive role, and always remaining opposed to the formation of any government, either ignoring it or combating it to the limits of our capacities." (From: "The Anarchist Revolution," by Errico Malatesta.)
• "...the oppressed are always in a state of legitimate self-defense, and have always the right to attack the oppressors." (From: "Anarchists Have Forgotten Their Principles," by E....)

The Idea of Good Government 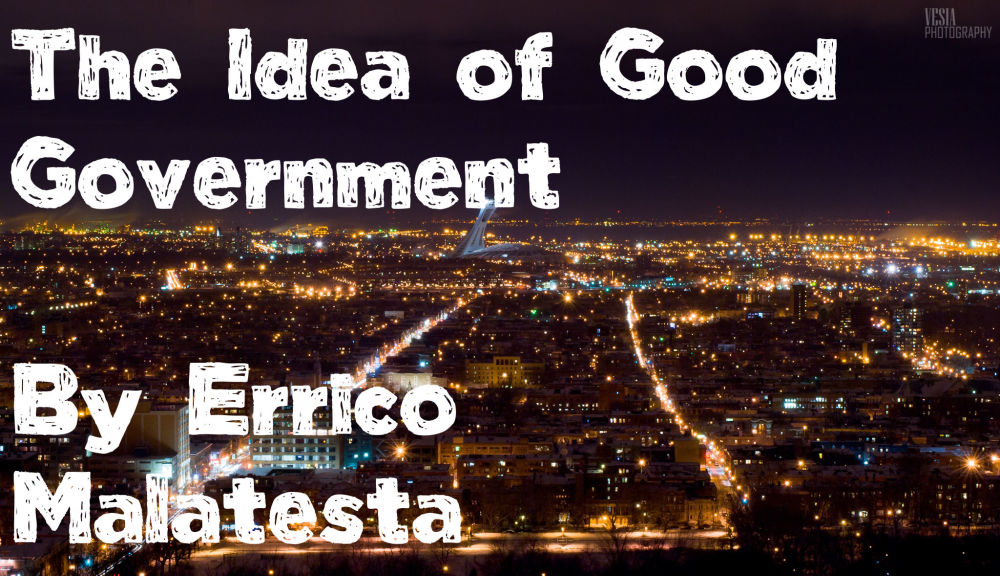 None can judge with certainty who is right and who is wrong, who is nearest the truth, or which is the best way to achieve the greatest good for each and everyone. Freedom coupled with experience, is the only way of discovering the truth and what is best; and there can be no freedom if there is a denial of the freedom to err.

But when one talks of freedom politically, and not philosophically, nobody thinks of the metaphysical bogey of abstract man who exists outside the cosmic and social environment and who, like some god, "could do what he wishes" in the absolute sense of the word.

When one talks of freedom one is speaking of a society in which no one could constrain his fellow beings without meeting with vigorous resistance, in which, above all, nobody could seize and use the collective force to impose his wishes on others and on the very groups which are the source of power.

Man is not perfect, agreed. But this is one reason more, perhaps the strongest reason, for not giving anyone the means to "put the brakes on individual freedom".

Man is not perfect. But then where will one also find men who are not only good enough to live at peace with others, but also capable of controlling the lives of others in an authoritarian way? And assuming that there were, who would appoint them? Would they impose themselves? But who would protect them from the resistance and the violence of the "criminals"? Or would they be chosen by the "sovereign people", which is considered too ignorant and too wicked to live in peace, but which suddenly acquires all the necessary good qualities when it is a question of asking it to choose its rulers?

1920
The Idea of Good Government — Publication.

Image Gallery of The Idea of Good Government