The Justice of the Peace

: By 1890 his political commitments were clearer: he showed a clear preference for the anarchist left, and became friends with Jean Grave and Camille Pissarro. He wrote at length on Impressionism, believing it to be the beginning of a cultural revolution in France. (From: Sharif Gemie Bio.)
• "The patience of the downtrodden and the dispossessed has lasted long enough. They want to live, they want to enjoy, they want their share of all the happiness and sunshine." (From: "Ravachol," by by Octave Henri Marie Mirbeau.)
• "The press is mistaken. There are certain corpses that walk again, and certain voices that won't be stifled. And the void is filled with terrible enigmas." (From: "Ravachol," by by Octave Henri Marie Mirbeau.)
• "I am horrified by the bloodshed, the ruins, and the death; I love life, and all life is sacred to me. This is why I'm going to ask for the anarchist ideal which no form of government can create: love, beauty, and peace between men. Ravachol [the Anarchist bombthrower] doesn't frighten me. He is as transient as the terror he inspires. He is the thunder clap that is followed by the glory of the sun and the calm sky." (From: "Ravachol," by by Octave Henri Marie Mirbeau.)

The Justice of the Peace 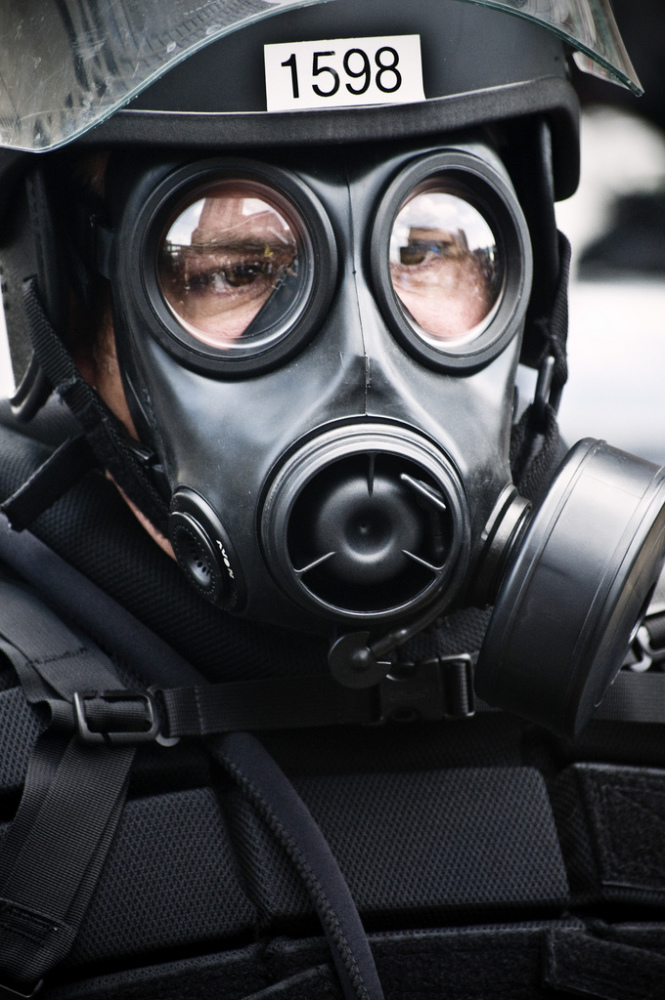 Translated from the French by Robert Helms

The Justice of the Peace occupied a ground floor hearing room in the village's town hall that looked out onto the square. The stark, tiled room was divided in the middle by a sort of railing made of white wood, which served as a bench for both the plaintiffs and the lawyers, and on the days of big trials, for the curious. At the end, on a low platform of badly joined planks, stood three small tables. The one in the middle was reserved for his honor the judge, the one on the right was for the clerk, and the one on the left for the sheriff. Behind them there was a Christ hanging on the wall, floating all alone in an unguilded frame, covered in fly droppings.

At the moment I entered, a hearing was in full swing. The room was filled with farmers, leaning on their long ashwood canes fitted with black leather straps, and with peasant women carrying heavy covered baskets, from which red rooster-combs, yellow duck-bills, and rabbit ears protruded. Cowshed and stable were represented by a strong odor. The judge was a small, clean-shaven, balding man with a ruddy face, dressed in a rough cloth vest. He was paying close attention to the discourse of an old woman who stood on the platform, accompanying every word with an expressive and colorful gesture. The hairy, bloated clerk seemed to be asleep with his head resting on his folded arms, while just across from him a skinny sheriff scribbled --the devil knows what --on a stack of thick files.

The old woman stopped talking and stood silent. "Is that all?" the judge inquired.

"Pardon me, your honor?," asked the plaintiff, stretching out a neck as long and wrinkled as a chicken's leg.

"I'm asking if you've finished this yarn about your wall?" the magistrate repeated in a louder voice.

"Yes, of course, your honor. That is, if you'll allow me, that's the story. The wall in question, along which Jean-Baptiste Macé attached his..."

She was about to go into the atecedants, but the judge interrupted her. "That's fine, that's fine. Leave it at that, Martine. We'll put it on the schedule. Clerk!"

The clerk slowly raised his head, his face looking hideous. "Clerk!" he repeated, "Take a note. Put this on the schedule."

Then, counting on his fingers, "Tuesday. We'll set it for Tuesday, then. That's it --next case!"

The clerk blinked his eyes, looked at a paper, turned it over and ran his finger up from the bottom of the page. His finger stopped abruptly in the middle.

"Gatelier vs. Rousseau!" he yelled out, without moving. "Are they here, Gatelier and Rousseau?"

The two farmers got up and stepped onto the platform. They clumsily placed themselves in front of the judge, who stretched his arms out on the table and crossed his calloused hands.

"Go ahead, Gatelier. What is it this time, my boy?"

Gatelier waddled back and forth on his heels, wiped his mouth with the back of his hand, looked to his right, then to his left, scratched his head, spit, and then finally he crossed his arms and spoke.

"Here it is, yer honor. We was comin' home from Saint Mike's fair --me, my wife Mrs. Gatelier, and Rousse, all together. We'd sold two calves, and a pig, too! Anyhow, if you don't mind me sayin' so, we was a bit sloshed, and we was comin' home when it's gettin' dark. Me, I was singin', and Rousse was botherin' my wife, so Mrs. G. says, after a while, 'Cut it out already, Rousse, fer God's sake! You're such a pig ...and such a child!'

Turning toward Rousseau, he asked, "Ain't it so?" "Yep, that's true!" said Rousseau.

Again he turned toward Rousseau.

"Sure it is!" Rousseau replied "Anyhow", Gatelier continued, "I kept on goin'. I walked and walked and walked. Then I turned around, and there's nobody on the road. I said to myself: 'that's funny! Where c'n they have gone off to?' and I back-tracked a ways, and I'm thinkin,' 'It's been quite a while. It's true that we're all a little tipsy, but it's still been a long time.' So I get to the spot where Rousse had climbed up the bank, and I climb the hedge and look in the ditch, and I say, 'Oh my God, there's Rousse on top of my wife!' Pardon me --I'm sorry, yer honor, but that's what I said.

A few scattered laughs were heard in the audience, but Gatelier paid no attention. He went on with his narrative:

"So Rousse was on my wife, and he's wrigglin' around in the ditch. You should have seen the way that damned Rousse was a-wigglin' around. Damn it! That bastard! Lousy good-fer-nothin'!"

"'Hey, fella,' I yelled from the hedge, 'hey, Rousse! Stop it, ya pig, stop it!' It was like I was talkin' to the wall. The more I told him to stop, the harder he'd be wrigglin', fer chrissake! Anyhow, I go down in the ditch and grab Rousse by the shirt, and I'm pullin' and pullin'. 'Lemme finish' he tells me. And my wife says to me, 'yeah, let 'im finish'. 'Look, buddy,' he repeated, 'let me get finished here and I'll give ya five francs! Ya hear me, man? Five francs!' So I let go of his shirt and say, 'Five francs, eh? D'ya mean it?' And he says, 'I mean it!'

For the third time Gatelier turned to Rousseau for confirmation.

"That's how it went!" Rousseau replied. Satisfied with that, Gatelier raised his voice.

"Listen, yer honor, please listen. It was a promise. It was swore! When he was all finished, he gets back on the road with Mrs. Gatelier, where I was sittin' and waitin' for them. 'How 'bout my five francs?' I ask 'im. 'T'morrow', he tells me, ''cause I only got a couple o' sous on me.' Now this coulda been true, or it mighta been a lie. I didn't say nothin', and we kept goin' on our way, Mrs. G, my wife, and Rousse, all together. Me, I was singin', Rousse was botherin' my wife, and she was sayin' all the time, 'Cut it out, Rousse, fer chrissake! Yer such a pig! Yer such a child!' and when we separated I says to Rousse, 'Hey, look, buddy, we have an agreement, right?' and he says, 'I swear it. Then he gives me a handshake, he makes nice with my wife, and off he goes. And since that time, seriously, judge, he's never wanted to gimme my five francs. And what makes it even worse is that, as lately as the day b'fore yesterday, when I came to get my money, he calls me a cuckold! He says to me, 'Fuck you, ya lousy cuckold'. That's what he told me."

Again he turned to Rousseau and asked, "Ain't that true?"

Rousseau shifted his weight from one leg to the other a few times, but made no reply.

The judge was becoming really perplexed. He rubbed his jaw with his hand, looked over at the clerk, then at the sheriff, as though asking for their opinions. Evidently he found the case difficult.

"Huh! Hmmm..." he muttered, and then he quietly reflected for a few minutes.

"How about you, Mrs. Gatelier, what've you got to say about this?" he asked a fat woman, seated on the bench with a basket between her legs, who had been listening to her husband's narrative with a sad gravity.

"Me? I got nothin' to say," she responded, standing up, "but if yer askin' if he promised, and if he sweared, well, yeah, yer honor, he sure did promise the five francs --the liar."

The judge addressed Rousseau: "What do you want, my boy? You made a promise, didn't you? Didn't you swear?"

Rousseau fumbled with his cap, looking rather embarrassed.

"All right, we've got to cut a deal," said the judge. "Five francs, now that might actually be a bit high. Look, Gatelier, how would you feel about, let's say... three francs?"

"Think about it, my boy. Three francs is something. And also, Rousseau will buy you a drink in the bargain. Can ya deal with that?"

The two farmers looked at each other.

"After all, ain't we pals?" replied Rousseau.

"OK, it's agreed!" and they shook hands.

"Next case!" yelled the judge, as Gatelier, Mrs. Gatelier, and Rousseau left the room slowly, with backs bent and arms swinging.

Image Gallery of The Justice of the Peace