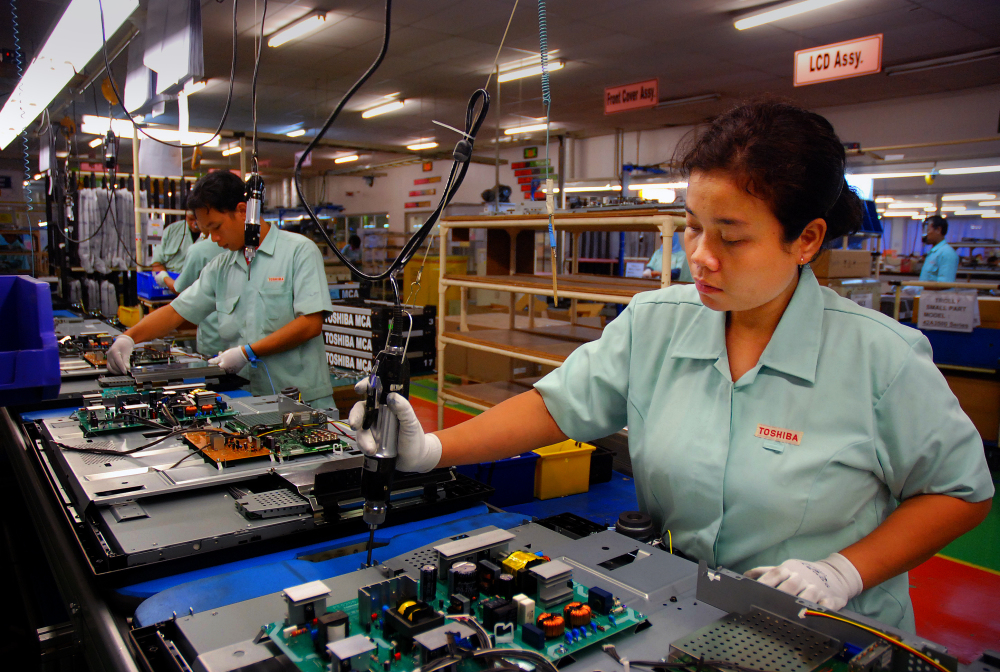 Photo by ILO in Asia and the Pacific,
CC BY-NC-ND License

Dear Jack,-You're about right; I do not see how you're going to got rid of landlords and employers of labor. First of all, if they weren't there how should we got any work to do or any wages for it I And second, they are there and wont clear off for our pleasure. Why they are rich by law; a lot of thorn are swindlers and such, but they've kept the right side of the law somehow, and I'd have the law made a bit plainer and tighter so that the scoundrels should not be able to play tricks. As far as I see, its less stealing not more stealing we want, and yet as far as I can make out your Communism, you would have stealing allowed. Why every one would be grabbing everything from every one else if there was no law against stealing. If a law was passed to make us all equal to-day we should be unequal to-morrow. And for my part I can't see the unfairness of that. You said in your first letter that if every one had a fair chance of a choice of work there is not so much difference in ability between men. Perhaps not; but there's an awful lot of difference in "go", in the amount of grip a man has over things and in the amount he can get out of them for himself. If the law gave every man a chance, I can't see but that he ought to got and to keep all he can, or that it's fair to expect him to share it with all the ne'er do-weels. Government can do almost anything, but I don't think that it'll ever make Englishmen see the fairness of that. It's all very fine to talk about lying under the trees and listening to the birds, like your Alphonse Kerr; but if he had wanted to build himself a house of the timber and eat the game for supper, be and the Marquis might have had some bones to pick before they could settle who was to have the use of the forest. Altogether I am in a complete fog.

DEAR WILLIAM,-You seem to have an idea that the capitalist exercises some useful function in society, that he really confers some benefit upon us in return for the wealth he squanders. This is a delusion. Employers of labor, landlords, lawyers and their kind, are nothing more nor less than parasites-they live upon you and I and the other working human beings. At present you have to have an employer because you are denied by law the opportunity of employing yourself. Look at the vast number of uncultivated acres of land there are in this our birth country, which might be made to yield food in abundance for all those who require it if they were allowed to labor upon it. Look at the vast stores of mineral wealth which might be worked, if required. Evidently there is at any rate a profusion of raw material, and we owe this to nature not to the capitalist. But we cannot get at it because of private property or rather monopoly. If we wish to cultivate the earth we are met by the landowner who claims the land in virtue of some musty title deeds backed up by Acts of Parliament which his ancestors have framed and adopted after a great deal of imposing procedure meant to awe the simple-minded. And on this rotten foundation the whole system of fraud which we call civilization is built up. The capitalist's recognize the legal right of the landlords to own the raw material, land, so as to work with them in robbing the real producer of the wealth the whole pack of thieves consume.

I think you will now admit that the raw material-land, minerals, etc.-from which everything is made, belongs in an exclusive sense to nobody, seeing that it is the production of nature and not of man. And I am sure neither you nor anyone else can give me any good reason why this raw material should be monopolized by a few. Evidently it is the property of all alike, and you and I are from every point of view entitled to the use of so much of it as will satisfy our needs.

But the law which you admire so much is the support of the unjust system. which prevents our gaining access to the raw material we need, and which compels us instead to sell our labor at a competition price.

Have you ever considered how our wages are fixed? Perhaps you think workmen are paid according to their ability, but this is not exactly the case. The value of labor is chiefly determined by its scarcity, and ability is only a secondary factor. Take as an example the shorthand writer. Years ago the wages of shorthand writers were very high, far above those of bricklayers, carpenters and compositors. But it does not follow that because the ability to write shorthand was paid two, three, or four times as much as the ability to lay bricks or set type, it was therefore a superior ability. This is proved by the fact that now only the very best shorthand writers can command a high price for their services, and thousands who years ago would have got good salaries cannot secure the income of an ordinary mechanic. Just think this over and tell me whether you think a shorthand writer who got a high salary some years ago was getting more than his due, or if you think he is getting less than his due now that wages have fallen, supposing his ability to be exactly the same now as then. The fact is you cannot tell the distinct value of any individual's services, and therein lies the -rest strength of Communism. Communism is just because it gives all men equal opportunities, whereas Individualism is unjust because it tends to give one man greater opportunities than another. As to the difference in "go" among men that is chiefly due to the fact that some have bad greater freedom of development than others. When a man's family for generations have lived in a healthy place and a healthy way, cultivating their minds and bodies; and when he himself, inheriting from them a strong body and mind, is able to live as suits him, and to work as he likes best, the chances are that he will have plenty of "go." And the man who has plenty of energy is the man who can best enjoy life. He enjoys work, he enjoys society, he makes everything round him ,,go" too. If he has a fair chance he benefits his follows whilst he benefits himself. There is no need that he should be rewarded by being allowed to monopolize extra wealth as well. It is the people who have been handicapped by nature or the cruelty and selfishness of their fellows who need extra artificial aids to help them up to the level of the more energetic members of society. If they get such brotherly aid they become happy and useful citizens. If not, they become a curse, a dead weight on society. And our present social arrangements tend to continually increase the proportion of these feeble and ineffectual people, at the very time when our knowledge of chemistry and mechanics ought to make it easier every day to find varied and light work suited to all sorts of capacities. Another argument in favor of Communism and Anarchy.

You want to make Law which is the support of all these evils and inequalities stronger, whilst I want to abolish it altogether. And you say that under Communism stealing would be allowed because there would be no law against stealing. But to-day stealing is allowed because there is a law in its favor. To-day stealing on a colossal scale goes on, stealing which causes the mass of the human race to live in misery and privation, and the abolition of law would mean the abolition of that sort of stealing. Do you not call it stealing when every capitalist takes from his workmen every day a great deal more than his equal share of what they produce and yet very often he has not even put a finger towards the work or given an hour to planning it?

The abolition of law would mean the disappearance of the policeman from the street corner, the magistrate from the police court and the judge from the bench, but it would also mean the practical cessation of crime, because with it that poverty and degradation which is the main cause of crime would disappear. If there were no law backed up by force, people would doubtless refuse to pay rent, they would think they were quite justified in helping themselves to the necessaries of life, and they would work willingly enough to replace what they had consumed, but there would be no injustice whatever in that.

You think a man ought to be able to get and to keep all he can. Very good, but this law of to-day prevents all but a few getting very much. If it was abolished and every man tried to take all he could with his own individual strength, he would precious soon discover that he was by no means capable of "licking creation," and that he was a very ordinary individual. I am not at all disposed to force such an individual to be sociable. Let him grab to his heart's content so long as he does not interfere with others. Let him have his pound of flesh. But he must not grumble if some there be who bind him to his bond and treat him as Portia treated Shylock. I rather think that those who try Individualism after the general liquidation of the Social Revolution, will soon tire of it and its thousand and one illusive expedients to secure to each individual exactly what he produces.

As you say the capitalists and landlords am there and wont clear off for our pleasure. But the aristocrats in France thought, they were secure enough in their position before '89, Yet they fell. And tomorrow maybe the aristocrats of wealth will join them. The education of the people proceeds rapidly. The respect for royalty, landlordism and capitalism is being undermined day by day here as elsewhere, and although it is impossible to say exactly when the people will resolve to act, it is quite certain that before very long they will do so.

Image Gallery of Letters Between Workmen