: There have almost certainly been better anarchist writers, more skilled anarchist organizers, anarchists who have sacrificed more for their beliefs. Perhaps though, Malatesta is celebrated because he combined all of these so well, exemplifying thought expressed in deed... (From: Cunningham Bio.)
• "Let there be as much class struggle as one wishes, if by class struggle one means the struggle of the exploited against the exploiters for the abolition of exploitation. That struggle is a way of moral and material elevation, and it is the main revolutionary force that can be relied on." (From: "About My Trial: Class Struggle or Class Hatred?,"....)
• "...all history shows that the law's only use is to defend, strengthen and perpetuate the interests and prejudices prevailing at the time the law is made, thus forcing mankind to move from revolution to revolution, from violence to violence." (From: "Further Thoughts on the Question of Crime," by Er....)
• "...the agelong oppression of the masses by a small privileged group has always been the result of the inability of the oppressed to agree among themselves to organize with others for production, for enjoyment and for the possible needs of defense against whoever might wish to exploit and oppress them. Anarchism exists to remedy this state of affairs..." (From: "Anarchism and Organization," Authored by Errico M....) 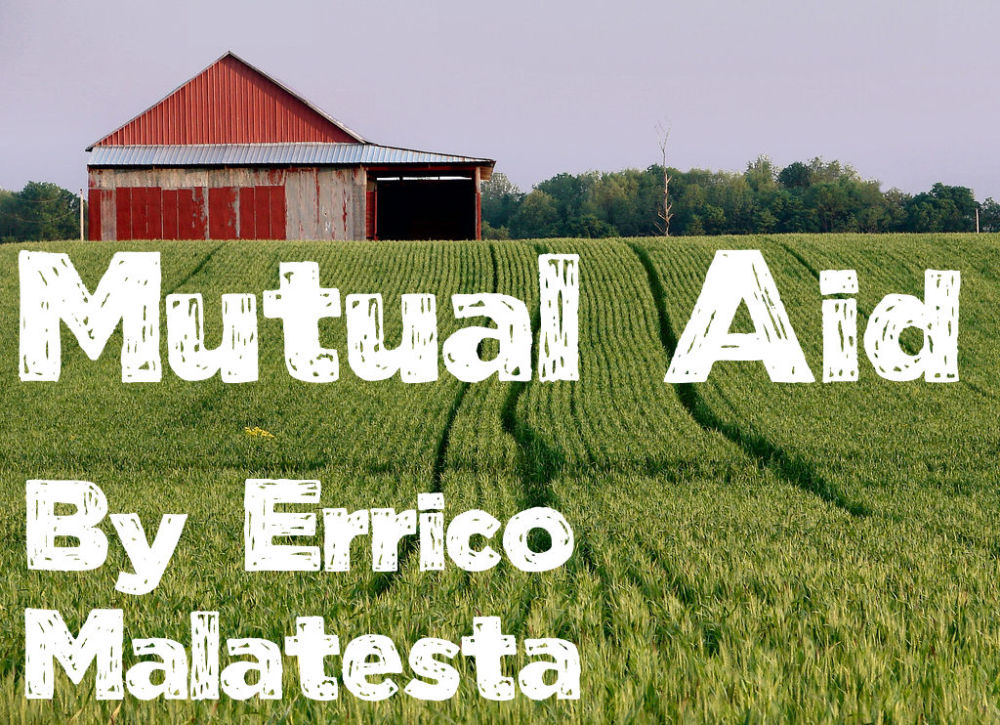 Since it is a fact that man is a social animal whose existence depends on the continued physical and spiritual relations between human beings, these relations must be based either on affinity, solidarity and love, or on hostility and struggle. If each individual thinks only of his well being, or perhaps that of his small consanguinary or territorial group, he will obviously find himself in conflict with others, and will emerge as victor or vanquished; as the oppressor if he wins, as the oppressed if he loses. Natural harmony, the natural marriage of the good of each with that of all, is the invention of human laziness, which rather than struggle to achieve what it wants assumes that it will be achieved spontaneously, by natural law. In reality, however, natural Man is in a state of continuous conflict with his fellows in his quest for the best, and healthiest site, the most fertile land, and in time, to exploit the many and varied opportunities that social life creates for some or for others. For this reason human history is full of violence, wars, carnage (besides the ruthless exploitation of the labor of others) and innumerable tyrannies and slavery.

If in the human spirit there had only existed this harsh instinct of wanting to predominate and to profit at the expense of others, humanity would have remained in its barbarous state and the development of order as recorded in history, or in our own times, would not have been possible. This order even at its worst, always represents a kind of tempering of the tyrannical spirit with a minimum of social solidarity, indispensable for a more civilized and progressive life.

But fortunately there exists in Man another feeling which draws him closer to his neighbor, the feeling of sympathy, tolerance, of love, and, thanks to it, mankind became more civilized, and from it grew our idea which aims at making society a true gathering of brothers and friends all working for the common good.

How the feeling arose which is expressed by the so-called moral precepts and which, as it develops, denies the existing morality and substitutes a higher morality, is a subject for research which may interest philosophers and sociologists, but it does not detract from the fact that it exists, independently of the explanations which may be advanced. It is of no importance that it may stem from the primitive, physiological fact of the sex act to perpetuate the human species; or the satisfaction to be derived from the company of one’s fellow beings; or the advantages to be derived from union in the struggle against the common enemy and in revolt against the common tyrant; or from the desire for leisure, peace and security that even the victors feel a need for; or perhaps for these and a hundred other reasons combined. It exists and it is on its development and growth that we base our hopes for the future of humanity.

“The will of God”, “natural laws”, “moral laws”, the “categoric imperative” of the Kantians, even the “interest clearly understood” of the Utilitarians are all metaphysical fantasies which get one nowhere. They represent the commendable desire of the human mind to want to explain everything, to want to get to the bottom of things, and could be accepted as provisional hypotheses for further research, were they not, in most cases, the human tendency of never wanting to admit ignorance and preferring wordy explanations devoid of factual content to simply saying “I don’t know.”

Whatever the explanations anyone may or may not choose to give, the problem remains intact: one must choose between love and hate, between brotherly cooperation and fratricidal struggle, between “altruism” and “egoism.”

The needs, tastes, aspirations and interests of mankind are neither similar nor naturally harmonious; often they are diametrically opposed and antagonistic. On the other hand, the life of each individual is so conditioned by the life of others that it would be impossible, even assuming it were convenient to do so, to isolate oneself and live one’s own life. Social solidarity is a fact from which no one can escape: it can be freely and consciously accepted and in consequence benefit all concerned, or it can be accepted willy-nilly, consciously or otherwise, in which case it manifests itself by the subjection of one to another, by the exploitation of some by others.

A whole host of practical problems arise in our day-to-day lives which can be solved in different ways, but not by all ways at the same time; yet each individual may prefer one solution to another. If an individual or group have the power to impose their preference on others, they will choose the solution which best suits the interests and tastes, the others will have to submit and sacrifice their wishes. But if no one has the possibility of obliging others to act against their will then, always assuming that it is not possible or considered convenient to adopt more than one solution, one must arrive by mutual concessions at an agreement which best suits everyone and least offends individual interests, tastes and wishes.

History teaches us, daily observation of life around us teaches, that where violence has no place [in human relations] everything is settled in the best possible way, in the best interests of all concerned. But where violence intervenes, injustice, oppression and exploitation invariably triumph.

The fact is that human life is not possible without profiting by the labor of others, and that there are only two ways in which this can be done: either through a fraternal, equalitarian and libertarian association, in which solidarity, consciously and freely expressed unites all mankind; or the struggle of each against the other in which the victors overrule, oppress and exploit the rest ...

We want to bring about a society in which men will consider each other as brothers and by mutual support will achieve the greatest well-being and freedom as well as physical and intellectual development for all ...

The strongest man is the one who is the least isolated; the most independent is the one who has most contacts and friendships and thereby a wider field for choosing his close collaborators; the most developed man is he who best can, and knows how to, utilize Man’s common inheritance as well as the achievements of his contemporaries.

In spite of the rivers of human blood; in spite of the indescribable sufferings and humiliations inflicted; in spite of exploitation and tyranny at the expense of the weakest (by reason of personal, or social, inferiority); in a word, in spite of the struggle and all its consequences, that which in human society represents its vital and progressive characteristics, is the feeling of sympathy, the sense of a common humanity which in normal times, places a limit on the struggle beyond which one cannot venture without rousing deep disgust and widespread disapproval. For what intervenes is morality.

The professional historian of the old school may prefer to present the fruits of his research as sensational events, large-scale conflicts between nations and classes, wars, revolutions, the ins and outs of diplomacy and conspiracies; but what is really much more significant are the innumerable daily contacts between individuals and between groups which are the true substance of social life. And if one closely examines what happens deep down, in the intimate daily lives of the mass of humanity, one finds that as well as the struggle to snatch better working conditions, the thirst for domination, rivalry, envy and all the unhealthy passions which set man against man, is also valuable work, mutual aid, unceasing and voluntary exchange of services, affection, love, friendship and all that which draws people closer together in brotherhood. And human collectivizes advance or decay, live or die, depending on whether solidarity and love, or hatred and struggle, predominate in the community’s affairs; indeed, the very existence of any community would not be possible if the social feelings, which I would call the good passions, were not stronger than the bad.

The existence of sentiments of affection and sympathy among mankind, and the experience and awareness of the individual and social advantages which stem from the development of these sentiments, have produced and go on producing concepts of “justice” and “right” and “morality” which, in spite of a thousand contradictions, lies and hypocrisy serving base interests, constitute a goal, an ideal towards which humanity advances.

This “morality” is fickle and relative; it varies with the times, with different peoples, classes and individuals; people use it to serve their own personal interests and that of their families, class or country. But discarding what, in official “morality”, serves to defend the privilege and violence of the ruling class, there is always something left which is in the general interest and is the common achievement of all mankind, irrespective of class and race.

The bourgeoisie in its heroic period, when it still felt itself a part of the people and fought for emancipation, had sublime gestures of love and self-abnegation; and the best among its thinkers and martyrs had the almost prophetic vision of that future of peace, brotherhood and well-being which socialists are struggling for today [1909]. But if altruism and solidarity were among the feelings of the best of them, the germ of individualism (in the sense of struggle between individuals), the principle of struggle (as opposed to solidarity) and the exploitation of man by man, were in the program of the bourgeoisie and could not but give rise to baneful consequences. Individual property and the principle of authority, in the new disguises of capitalism and parliamentarism, were in that program and had to lead, as has always been the case, to oppression, misery and the dehumanization of the masses.

And now that the development of capitalism and parliamentarism has borne its fruits, and the bourgeoisie has exhausted every generous sentiment and progressive elan by the practice of political and economic competition, it is reduced to having to defend its privileges with force and deceit, while its philosophers cannot defend it against the socialist attacks except by bringing up, inopportunely, the law of vital competition.