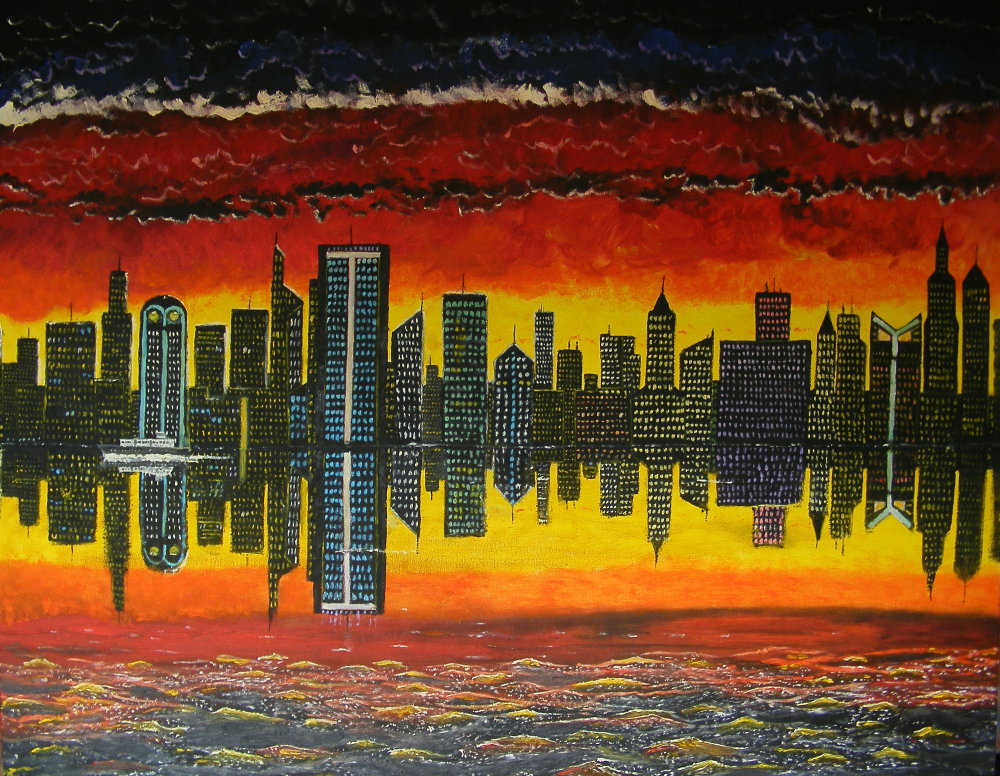 After a long run from Chicago, one arrives in Jersey City. You take a ferry boat for New York City. The Hudson River is fairly swarming with crafts of every description, from the small tug to the great trans-Atlantic steamer, the wonder of maritime achievements. After a few minutes we touch the New York shore; then we are ushered into the most intense center of commercialism on this continent—the most intense poverty and the most luxuriating wealth.

Here we have our Murray Hill, Fifth Avenue, Riverside Drive and Madison Avenue, etc., with their magnificent palaces, equipages, fine women and fancy dogs, the latter much in evidence. The people who dwell along these avenues lack nothing so much as human kindness and a realization that they are a part and parcel of a common humanity; they have their troubles, cares and sorrows, it is true, but these are due largely to the unnatural lives they lead; it is a different care and sorrow from that of the poor.

Speaking of the poor, I have seen more abject poverty within a stone’s throw of where I am stopping, and in walking through the streets where live the poor of New York City, than I have witnessed in the whole course of my life before.

In coming to New York, I passed through miles and miles of as good rich, tillable land as there is to be found anywhere, both in the United States and Canada. Millions of acres of this land are untouched, and when I arrive in New York I find tens of thousands of human beings living in heaps, piled upon one another, packed like sardines in tenement houses, poor, ignorant and dejected, helplessness and despair deep-furrowed upon their blank faces. Every steamship which lands, dumps hundreds of them each day upon the streets of New York City, and these float towards and become mixed in with the poverty already here, until the whole mass presents a picture of poverty and despair at once degrading, disgusting and depressing. It cannot be duplicated anywhere in America, I believe.

In short, the evils and glaring inequalities of conditions under our present unjust, unsocial system are more conspicuous here than anywhere else in America, is my candid belief. Here tens of thousands of children are born each year, doomed to be reared in the stuffy, dirty, overcrowded tenements and upon the dirty streets and sidewalks, who will never know what the beauties of nature mean, will never know what it is to lie beneath a shady tree and watch the fleeing clouds flit by or hear the songbird sing, or watch the green leaves with which the gentle breezes play, or sit beside the babbling brook and build air-castles.

No! All the charms of nature in her purity will remain to them a sealed book. Alas! None of these innocent pastimes will ever be enjoyed by thousands of New York City’s children. From the bare, barren, uninviting tenements they will go to the factories and become mere cogs in the great revolving wheels. Their intellects, already stupefied, will become brutalized. How to get these helpless human beings out of the overcrowded cities and on the bosom of Mother Earth is one of the greatest problems of the age. In the streets and quarters where dwell the poor, there is no evidence of race suicide. In the house where I am stopping, there are six families to the floor; the building is six stories high; there is but one entrance to the whole house. The only places for the children to play are in the halls and street, or on the stairs.

This is one of the modern houses; in fact, it is just completed. The bedrooms are so small that only single beds or cots can be used in them. Into these little flats will often be crowded four, five or six families, dear reader. I only give the facts. If President Roosevelt were to happen into this part of the town, his dentistry would shine forth resplendently; he would see no signs of race suicide hereabout. Living expenses are something unthinkable to those who have never visited New York. For four small rooms—mere closets—on the fourth or fifth floors, $25 is paid; for the lower floors, still more is paid, higher rents are charged. All the necessaries of life are at exorbitant prices.

When these prices are taken into account one can imagine how the people are compelled to crowd together in order to pay the rent and live at all. But, readers of The Liberator, here is the best joke of the season on your humble correspondent:

Two days after arriving in New York City I started out to do a little “slumming” and to gather material for The Liberator. Well, I strolled leisurely along Broom Street (which needs brooms very badly), noting the evidences of wretchedness that are to be seen on every hand.

Duplications of the countenance of the “The Man with a Hoe” are met on all sides in these quarters of the town, these streets of the Ghetto. At a newsstand I stopped, purchased a morning paper, was about to fasten my handbag when I was suddenly, rudely jostled, and my handbag was “swiped” by a light-fingered gentleman—an “artful dodger” who made off with my handbag: money, valuables and all. So sudden was the hold, in broad daylight, that I was amazed. I tried to follow the robber, but my way was blocked by two others.

Then I understood the whole scheme. I was the victim of a gang who had been following me, waiting for a favorable opportunity to snatch my handbag. Well, for a few minutes I was bewildered. A thousand miles from home, not a penny, and hungry at that, for I was on my way to lunch at the time. The thief was twenty dollars ahead; I was twenty dollars out of pocket. I felt very humble indeed. The Ghetto lost all interest for me.

Reader, were you ever in the same fix? I hope you never may be. When I related my troubles to my friends, the New Yorkers—they had a very cold, discomforting way about them. They said, in a distant, nonchalant way, “Why, didn’t you know you were in New York?”

New York, nevertheless, is a great and wonderful city. It is liable to take considerable of the conceit out of a Chicagoan to come here.