: The originality of his ideas, the imagery and vehemence of his eloquence, his untiring zeal in propagandism, helped too by the natural majesty of his person and by a powerful vitality, gave Bakunin access to all the socialistic revolutionary groups, and his efforts left deep traces everywhere... (From: The Torch of Anarchy.)
• "The principle of political or State morality is very simple. The State, being the supreme objective, everything that is favorable to the development of its power is good; all that is contrary to it, even if it were the most humane thing in the world, is bad. This morality is called Patriotism." (From: "Marxism, Freedom, and the State," Translated and ....)
• "The great bulk of mankind live in a continual quarrel and apathetic misunderstanding with themselves, they remain unconscious of this, as a rule, until some uncommon occurrence wakes them up out of their sleep, and forces them to reflect on themselves and their surroundings." (From: "The Church, the State, and the Commune," by Mikha....)
• "What is permitted to the State is forbidden to the individual. Such is the maxim of all governments." (From: "The Immorality of the State," by Mikhail Bakunin.)

This pamphlet appears in Anarchy Archives with the permission of IISH. 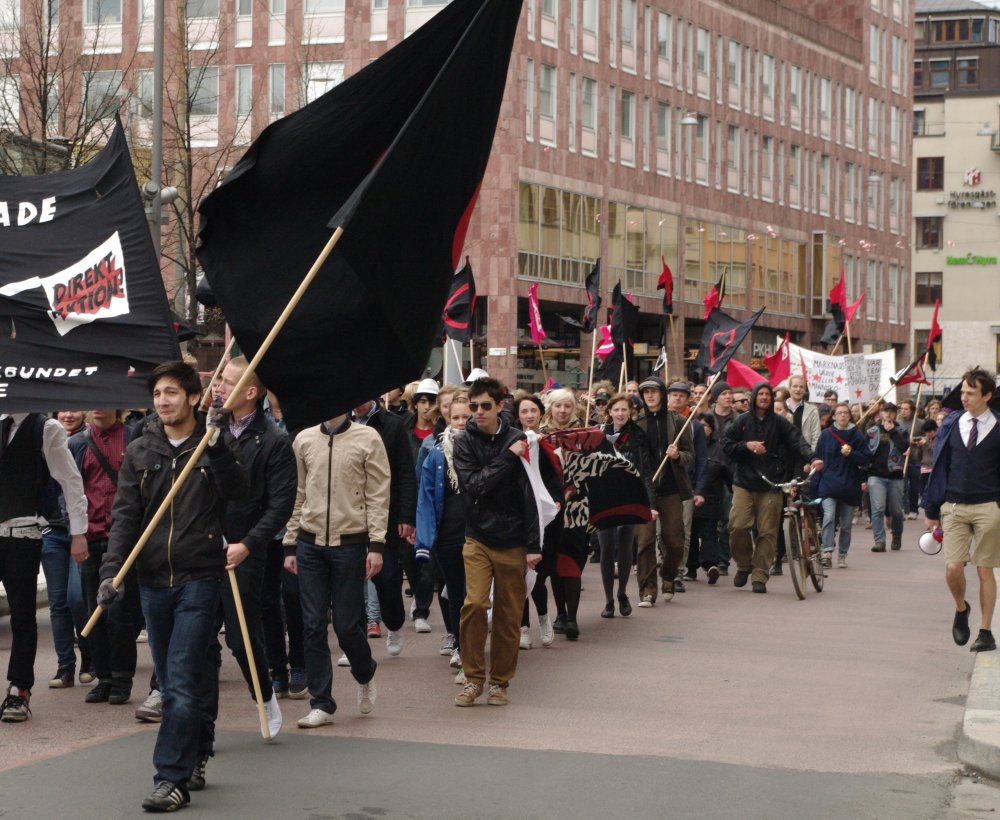 Photo by altemark,
CC BY License

[The Policy was published in Egalite In 1869. It was translated by K. L. from a German version, in 1911, and was published in the Herald of Revolt, for October of that year under the title of "The Issue." It is now republished under its original title.-ED.]

"Up to now we believed," says a reactionary paper, "that the political and religious opinions of a man depended upon the fact of his being a member of the International or not."

At first sight, one might think that this paper was correct in its altered opinion. For the International does not ask any new member if he is of a religious or atheistic turn of mind. She does not ask if he belongs to this or that or no political party. She simply says: Are you a worker? If not, do you feel the necessity of devoting yourself wholly to the interests of the working class, and of avoiding all movements that are opposed to it? Do you feel at one with the workers? And have you the strength in you that is requisite if you would be loyal to their cause? Are you aware that the workers --- who create all wealth, who have made civilization and fought for liberty --- are doomed to live in misery, ignorance, and slavery? Do you understand that the main root of all the evils that the workers experience, is poverty? And that poverty --- which is the common lot of the worker --- in all parts of the world --- is a consequence of the present economic organization of society, and especially of the enslavement of labor --- i.e. the proletariat --- under the yoke of capitalism --- i.e the bourgeoisie?

Do you know that between the proletariat and the bourgeoisie there exists a deadly antagonism which is the logical consequence of the economic positions of the two classes? Do you know that the wealth of the bourgeoisie is incompatible with the comfort and liberty of the workers, because their excessive wealth is, and can only be, built upon the robbing and enslavement of the workers? Do you understand that for the same reason, the prosperity and dignity of the laboring masses inevitably demands the entire abolition of the bourgeoisie? Do you realize that no single worker, however intelligent and energetic be may be, can fight successfully against the excellently organized forces of the bourgeoisie --- a force which is upheld mainly by the organization of the State --- all States?

Do you not see that, in order to become a power, you must unite --- not with the bourgeoisie, which would be a folly and a crime, since all the bourgeoisie, so far as they belong to their class, are our deadly enemies? Nor with such workers as have deserted their own cause and have lowered themselves to beg for the benevolence of the governing class? But with honest men, who are moving, in all sincerity, towards the same goal as, you? Do you understand that, against the powerful combinations formed by the privileged classes, the capitalists or possessors of the means and instruments of production and distribution, and all the states on earth --- a local or national association --- even if it belonged to one of the biggest countries in Europe --- can never triumph? Do you not realize that, in order to fight and to vanquish this Capitalist combination, nothing less than an amalgamation of all local and national labor associations --- i.e. The International Association of the Workers of all Lands --- is required?

If you know and comprehend all this, come into our camp whatever else your political or religious convictions are. But if you are at one with us, and so long as you are at one with us, you will wish to pledge the whole of your being, by your every action as well as by your words, to the common cause, as a spontaneous and whole-hearted expression of that fervor of loyalty that will inevitably take possession of you. You will have to promise:

(1) To subordinate your personal and even your family
interest, as well as political and religious bias and would-be activities, to the highest interest of our association, namely the struggle of Labor against Capital, the economic fight of the Proletariat against the Bourgeoisie.
(2) Never, in your personal interests, to compromise with
the bourgeoisie.
(3) Never to attempt to secure a position above your fellow
workers, whereby you would become at once a bourgeois and all enemy of the proletariat; for the only difference between capitalist's and workers is this: the former seek their welfare outside, and at the expense of, the welfare of the community whilst the welfare of the latter is dependent on the solidarity of those who are robbed on the industrial field.
(4) To remain ever and always loyal to this principle of
the solidarity of labor: for the smallest betrayal of this principle, the slightest deviation from this solidarity, is, in the eyes of the International, the greatest crime and shame with which a worker can soil himself.

The founders of the International acted wisely in refusing to make philosophic or political principles the basis of their association, and preferring to have the exclusively economic struggle of Labor against Capital as the sole foundation. They were convinced that the moment a worker realized the class-struggle, the moment he --- trusting to his right and the numerical strength of his class --- enters the arena against capitalist robbery: that very moment, the force of circumstances and the evolution of the struggle, will oblige him to recognize all the political, socialistic, and philosophic principles of the International. These principles are nothing more or less than the real expressions of the aims and objects of the working-class. The necessary and inevitable conclusion of these aims, their one underlying and supreme purpose, is the abolition --- from the political as well as from the social viewpoint --- of: ---

(1) The class-divisions existent in society, especially of those
divisions imposed on society by, and in, the economic interests of the bourgeoisie.
(2) All Territorial States, Political Fatherlands, and Nations, and on
the top of the historic ruins of this old world order, the establishment of the great international federation of all local and national productive groups.

From the philosophic point of view, the aims of the International are nothing less than the realization of the eternal ideals of humanity, the welfare of man, the reign of equality, justice, and liberty on earth, making unnecessary all belief in heaven and all hopes for a better hereafter.

The great mass of the workers, crushed by their daily toil, live in ignorance and misery. Whatever the political and religious prejudices that have been forced into their heads may be, this mass is unconsciously Socialistic: instinctively, and, through the pinch of hunger and their position, more earnestly and truly Socialistic than all the "scientific" and "bourgeois Socialists" put together. They (the mass) are Socialists through all the circumstances of their material existence, whereas the latter (the bourgeois Socialists") are only Socialistic through the circumstances of reasoning; and, in reality, the necessities of life have a greater influence over those of pure reasoning, because reasoning (or thought) is only the reflex of the continually developing life-force and not its basis.

The workers do not lack reality, the real longing for Socialist endeavor, but only the Socialist idea. Every worker, from the bottom of his heart, is longing for a really human existence, i.e., material comfort and mental development founded on justice, i.e., equality and liberty for each and every man in work. This cannot be realized in the existing political and social organization, which is founded on injustice and bare-faced robbery of the laboring masses. Consequently, every reflective worker becomes a revolutionary Socialist, since he is forced to realize that his emancipation can only be accomplished by the complete overthrow of present-day society. Either this organization of injustice with its entire machine of oppressive laws and privileged institutions, must disappear, or else the proletariat is condemned to eternal slavery.

This is the quintessence of the Socialist idea, whose germs can be found in the instinct of every serious thinking worker. Our object, therefore, is to make him conscious, of what he wants, to awaken in him a clear idea that corresponds to his instincts: for the moment the class consciousness of the proletariat has lifted itself up to the level of their instinctive feeling, their intention will have developed into determination, and their power will be irresistible.

What prevents the quicker development of this idea of salvation among the Proletariat? Its ignorance; and, to a great extent, the political and religious prejudices with which the governing class are trying to befog the consciousness and the natural intelligence of the people. How can you disperse this ignorance and destroy these strange prejudices? "The liberation of the Proletariat must be the work of the Proletariat itself," says the preface to our general statute (The International). And it is a thousand times true! This is the main foundation of our great association. But the working class is still very ignorant. It lacks completely every theory. There is only one way out therefore, namely --- Proletarian liberation through action. And what will this action be that will bring the masses to Socialism? It is the economic struggle of the Proletariat against the governing class carried out in solidarity. It is the Industrial Organization of the workers of the world.