: There have almost certainly been better anarchist writers, more skilled anarchist organizers, anarchists who have sacrificed more for their beliefs. Perhaps though, Malatesta is celebrated because he combined all of these so well, exemplifying thought expressed in deed... (From: Cunningham Bio.)
• "We want to make the revolution as soon as possible, taking advantage of all the opportunities that may arise." (From: "Revolution in Practice," by Errico Malatesta, fro....)
• "...the State is incapable of good. In the field of international as well as of individual relations it can only combat aggression by making itself the aggressor; it can only hinder crime by organizing and committing still greater crime." (From: "Pro-Government Anarchists," by Errico Malatesta, ....)
• "Let there be as much class struggle as one wishes, if by class struggle one means the struggle of the exploited against the exploiters for the abolition of exploitation. That struggle is a way of moral and material elevation, and it is the main revolutionary force that can be relied on." (From: "About My Trial: Class Struggle or Class Hatred?,"....) 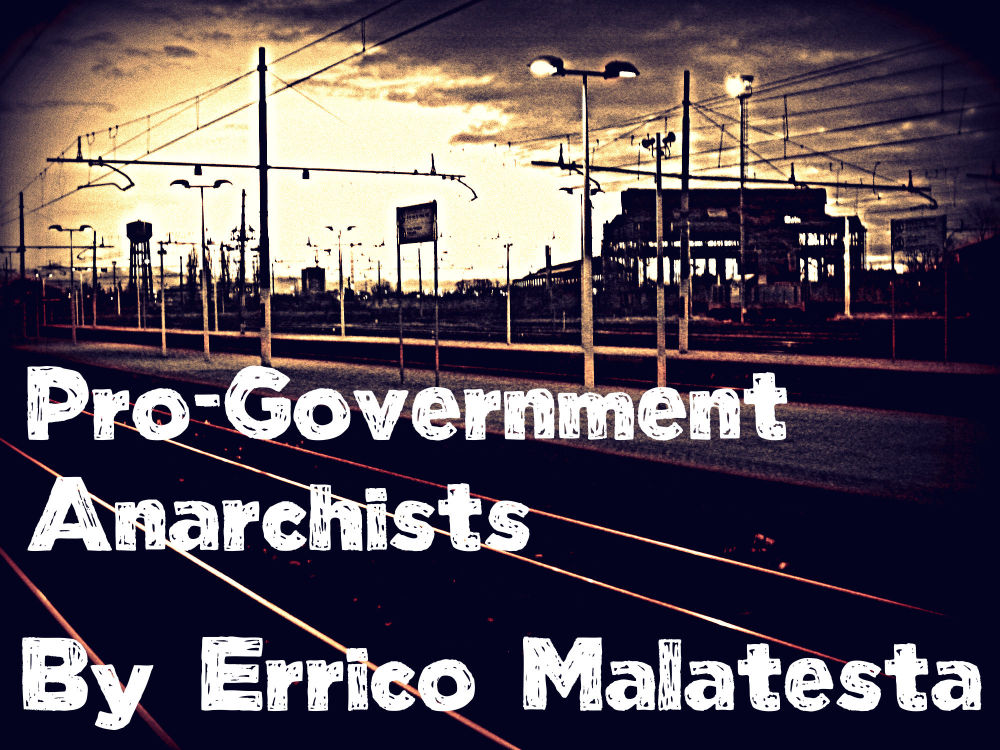 A manifesto has just appeared, signed by Kropotkin, Grave, Malato, and a dozen other old comrades, in which, echoing the supporters of the Entente Governments who are demanding a fight to a finish and the crushing of Germany, they take their stand against any idea of “premature peace”.

The capitalist Press publishes, with natural satisfaction, extracts from the manifesto, and announces it as the work of “leaders of the International Anarchist Movement.”

Anarchists, almost all of whom have remained faithful to their convictions, owe it to themselves to protest against this attempt to implicate Anarchism in the continuance of a ferocious slaughter that has never held promise of any benefit to the cause of Justice and Liberty, and which now shows itself to be absolutely barren and resultless even from the standpoint of the rulers on either side.

The good faith and good intentions of those who have signed the manifesto are beyond all question. But, however painful it may be to disagree with old friends who have rendered so many services to that which in the past was our common cause, one cannot—having regard to sincerity, and in the interest of our movement for emancipation—fail to dissociate oneself from comrades who consider themselves able to reconcile Anarchist ideas and cooperation with the Governments and capitalist classes of certain countries in their strife against the capitalists and Governments of certain other countries.

During the present war we have seen Republicans placing themselves at the service of kings, Socialists making common the cause with the ruling class, Laborists serving the interests of capitalists; but in reality all these people are, in varying degrees, Conservatives—believers in the mission of the State, and their hesitation can be understood when the only remedy lay in the destruction of every Governmental chain and the unloosing of the Social Revolution. But such hesitation is incomprehensible in the case of Anarchists.

We hold that the State is incapable of good. In the field of international as well as of individual relations it can only combat aggression by making itself the aggressor; it can only hinder crime by organizing and committing still greater crime.

Even on the supposition—which is far from being the truth—that Germany alone was responsible for the present war, it is proved that, as long as governmental methods are adhered to, Germany can only be resisted by suppressing all liberty and reviving the power of all the forces of reaction. Except the popular Revolution, there is no other way of resisting the menace of a disciplined Army but to try and have a stronger and more disciplined Army; so that the sternest anti-militarists, if they are not Anarchists, and if they are afraid of the destruction of the State, are inevitably led to become ardent militarists.

In fact, in the problematical hope of crushing Prussian Militarism, they have renounced all the spirit and all the traditions of Liberty; they have Prussianized England and France; they have submitted themselves to Czarism; they have restored the prestige of the tottering throne of Italy.

Can Anarchists accept this state of things for a single moment without renouncing all right to call themselves Anarchists? To me, even foreign domination suffered by force and leading to revolt, is preferable to domestic oppression meekly, almost gratefully, accepted, in the belief that by this means we are preserved from a greater evil.

It is useless to say that this is a question of an exceptional time, and that after having contributed to the victory of the Entente in “this war,” we shall return, each into his own camp, to the struggle for his own ideal.

If it is necessary today to work in harmony with the Government and the capitalist to defend ourselves against “the German menace,” it will be necessary afterwards, as well as during the war.

However great may be the defeat of the German Army—if it is true that it will be defeated—it will never be possible to prevent the German patriots thinking of, and preparing for, revenge; and the patriots of the other countries, very reasonably from their own point of view, will want to hold themselves in readiness so that they may not again be taken unaware. This means that Prussian Militarism will become a permanent and regular institution in all countries.

What will then be said by the self-styled Anarchists who today desire the victory of one of the warring alliances? Will they go on calling themselves anti-militarists and preaching disarmament, refusal to do military service, and sabotage against National Defense, only to become, at the first threat of war, recruiting-sergeants for those Governments that they have attempted to disarm and paralyze?

It will be said that these things will come to an end when the German people have rid themselves of their tyrants and ceased to be a menace to Europe by destroying militarism in their own country. But, if that is the case, the Germans who think, and rightfully so, that English and French domination (to say nothing of Czarist Russia) would be so more delightful to the Germans than German domination to the French and English, will desire first to wait for the Russians and the others to destroy their own militarism, and will meanwhile continue to increase their own country’s Army.

And then, how long will the Revolution be delayed? How long Anarchy? Must we always wait for the others to begin?

The line of conduct for Anarchists is clearly marked out by the very logic of their aspirations.

The war ought to have been prevented by bringing about the Revolution, or at least by making the Government afraid of the Revolution. Either the strength or the skill necessary for this has been lacking.

Peace ought to be imposed by bringing about the Revolution, or at least by threatening to do so. To the present time, the strength or the skill is wanting.

Well! There is only one remedy: to do better in future. More than ever we must avoid compromise; deepen the chasm between capitalists and wage slaves, between rulers and ruled; preach expropriation of private property and the destruction of States as the only means of guaranteeing fraternity between the peoples and Justice and Liberty for all; and we must prepare to accomplish these things.

Meanwhile it seems to me that it is criminal to do anything that tends to prolong the war, that slaughters men, destroys wealth, and hinders all resumption of the struggle for emancipation. It appears to me that preaching “war to the end” is really playing the game of the German rulers, who are deceiving their subjects and inflaming their ardor for fighting by persuading them that their opponents desire to crush and enthralled the German people.