Father of Social Ecology and Anarcho-Communalism

: Growing up in the era of traditional proletarian socialism, with its working-class insurrections and struggles against classical fascism, as an adult he helped start the ecology movement, embraced the feminist movement as antihierarchical, and developed his own democratic, communalist politics. (From: Anarchy Archives.)
• "...anarchism is above all antihierarchical rather than simply individualistic; it seeks to remove the domination of human by human, not only the abolition of the state and exploitation by ruling economic classes." (From: "The Ghost of Anarcho-Syndicalism," by Murray Book....)
• "The social view of humanity, namely that of social ecology, focuses primarily on the historic emergence of hierarchy and the need to eliminate hierarchical relationships." (From: "The Crisis in the Ecology Movement," by Murray Bo....)
• "The historic opposition of anarchists to oppression of all kinds, be it that of serfs, peasants, craftspeople, or workers, inevitably led them to oppose exploitation in the newly emerging factory system as well. Much earlier than we are often led to imagine, syndicalism- - essentially a rather inchoate but radical form of trade unionism- - became a vehicle by which many anarchists reached out to the industrial working class of the 1830s and 1840s." (From: "The Ghost of Anarcho-Syndicalism," by Murray Book....)

This article appears in Anarchy Archives with the permission of the author. 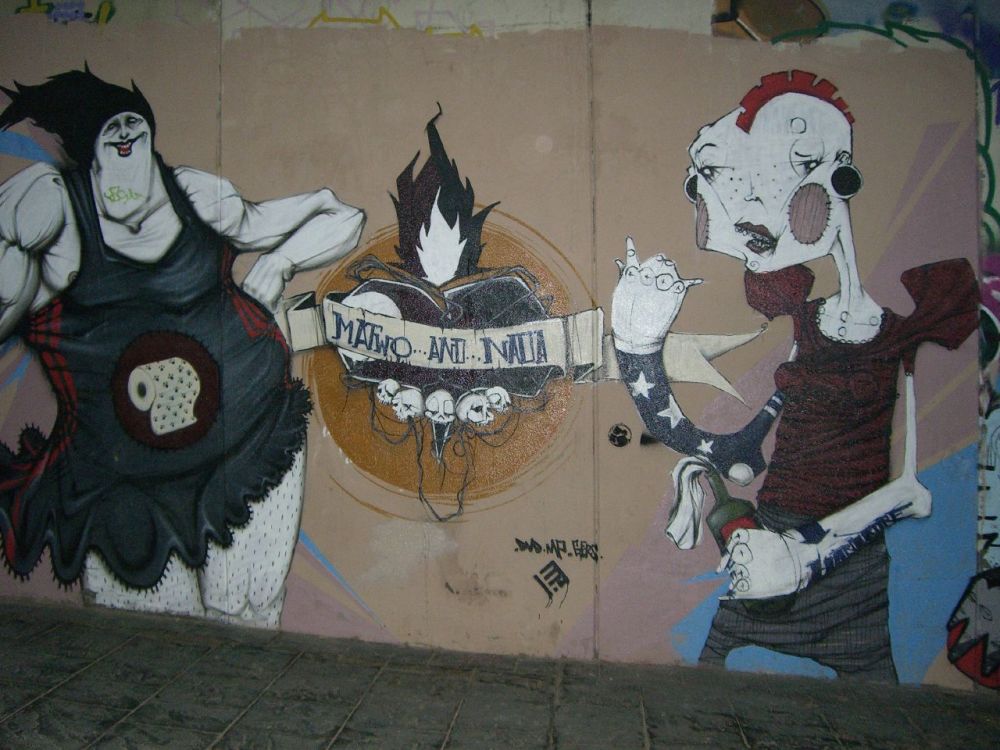 STANLEY ARONOWITZ has written a generally admirable and important work in Socialist Review, "The Remaking of the American Left," that deserves widespread discussion. For the present, I would like to focus on what I regard as a core issue of the article, notably Aronowitz's distinction "between the ideological left of socialists, communists, libertarians of various sorts . . . and the popular left" which in past decades consisted of movements for redistributive justice," by which I take Aronowitz to mean the traditional labor, agrarian, and unemployed movements of the 1930s and earlier periods. While these movements certainly linger on at varying levels of consciousness and degrees of organization, I feel we cannot give enough emphasis today to radical environmentalists, feminists, gays, ethnic groups, countercultural folk, and peace activists. I do not believe the latter simply "supplement" the "popular left" of traditional socialism, and I am sure that Aronowitz would agree with my formulation. What I do think, however, is that many leftists today fail to recognize that the old "popular left" and the new one reflect basically changing social con- texts of a historical nature that have not received sufficient emphasis among socialists and anarchists-changes that should profoundly affect our strategies for the left as a whole.

The old "ideological left" had its roots in a special kind of "popular left": the sizable immigrant population and its children from which it recruited its most devoted cadres and acquired its material resources. This population, in turn, developed its own radicalism around the conflict of "toilers" not only with capitalism but also with the quasi-feudal hierarchies that permeated the pre industrial world of southern and eastern Europe. In transplanting these struggles to America, the immigrant "popular left" tended to parallel a separate, more domestic American radicalism largely rooted in the libertarian, decentralist, and amorphously individualistic traditions of New England Puritanism and frontier ideologies. American radicalism of past eras, in effect, was Quixotically schizophrenic in its ideals and traditions, marked by internal divisions which Debs's Socialist Party and the IWW tried ephemerally to heal-a European socialism that had its roots in the struggle with quasi-feudal contexts as well as with capitalist ones and an American populism that had its roots as much in the libertarian context of the American Revolution and frontier as in the emerging industrial world that followed the Civil War.

Radicals are now faced with the compelling fact that the old immigrant socialists and anarchists are gone. They live among us as nostalgic-and aging-figures of the past. Their European traditions and ideals remain more as memories than as visions of the future. The domestic agrarian populist movements of an earlier America are also largely gone, but what is crucial is that, in contrast to the old immigrant socialists and anarchists, they haunt us in a very different way. Their utopian vision of the American Dream the image of the United States as a "New Jerusalem"-lingers on as a continuing national ideology of minimal government, individual freedom, decentralist ideals, and localist claims. This is not merely the fare on which the right has nourished itself ideologically with its slogans of a "New Federalism" and deregulation. It was also given a leftist twist in the Port Huron Statement of 1962 and Martin Luther King's "I Have a Dream" speech in Washington. Clothed in the founding documents of Jefferson's Declaration of Independence, many state constitutions, and even the national con situation, this utopian dimension still obstructs ruling class efforts to centralize economic and political power, to extend the authority and surveillance of the police, and to completely disempower the American people. As the old immigrant traditions fade away, all radicals will have to come to terms with the still living elements of American traditions that a corporate society is patently seeking to uproot. Put bluntly: our "bourgeois democracy" is no longer compatible with a cybernetic, robotic, highly centralized and rationalized society.

It is within this force-field of a utopian tradition that has given America its very identity and the brute needs of a corporate society that threatens to subvert it that the American left can hope to extend itself from the ideological to the popular realm-from a largely sectarian to a social movement. The immediate locus of such a popular realm lies in the neighborhood and the municipality. Call it a communitarian socialism, libertarian municipalism or, for that matter, a new populism-a word we have no reason whatever to fear-I submit that a radical theory that fails to analyze this local sphere, to explore its social potentialities, will remain a fairly narrow political theory committed to "partyness" and par liamentarism. It would be presumptuous to blueprint the institutional design of such a new populism for every American community. In northern Vermont, where I live, it takes the form of the town meeting, which has gained new vitality as a result of its moral authority in launching the nuclear-freeze movement. In larger cities or towns, it may take the form of citizen assemblies such as those in Burlington, Vermont, where " Neighborhood Assemblies" have been legally established in the city's six wards-a network that could just as well exist in cities as large as New York and San Francisco. Whatever the form may be and however much municipal forms may succeed in confederating on a regional and hopefully national scale, they are as "American" as apple pie. They significantly intensify the force-held of political life that places America's corporate future at odds with the country's most lofty traditional ideals.

By the same token, a populist vision of libertarian municipalism has its own economic perspective, as I have contended in my writings over the past few years-the municipalization of the economy in contrast to its nationalization. Conceptually this can be drawn from Paul Brousse and historically from the Paris Commune-an upsurge we readily celebrate but which we have generally explored in a somewhat wrong-headed way. Taken by itself, to be sure, the municipalization of the economy can be a quite vacuous demand (as so many "publicly owned" utilities so clearly reveal)if it does not assert the control of citizen assemblies over economic life. In theory, however, municipal control in distinction to nationalization shifts the economic emphasis of society from the center to the base, from the state to the community. And it is only as good as the communal structures that exercise this control, not as an abstract formula that ultimately becomes a mere play on the words "municipalization" and "nationalization."

We have produced the contours of a counterculture-not only in lifestyle but in ecology, feminism, gay rights and lesbian rights movements, and the claims of ethnic identity. This counterculture, mixed and lacking as it may be in many respects, forms the underpinnings of major movements in Europe today, notably the German Greens. What we must now help the American people create-in some respects revive-are the decentralized and confederal counterinstitutions that will provide this counterculture with political tangibility. Within this communitarian and populist framework, we can reach working people, no less than the middle-class strata, as people-parents, children, neighbors, individuals who are concerned with their environment, peace issues, health problems, and the like that concern all citizens as human beings. We can reach them at a point in their lifeways where their humanity and their universality transcend their more narrow class being.

Aronowitz's article continually edges toward the new context I have tried to present and almost invites us to ask that he go further with the line of thought he seems to open up. He describes "new social movements" that oppose "the prevailing ethos that subordinates health, working satisfaction, and even human survival to the accumulation of capital"-people, in fact, who have renounced "consumption as ideology, as well as economic growth as the condition of human happiness." One cannot help but ask: how will an American radical movement that seeks to encompass these growing strata institutionally articulate their aspirations and from what political traditions will it draw its inspiration? As a party that will try to unite a waning labor movement with ecology, peace, countercultural, gay, lesbian, and ethnic groups? Will it try to find its counterinstitutions in the American tradition of localism, community, autonomy, decentralism, and citizens" assemblies and initiative groups that, confederated regionally and nationally, will form a counterpower to the growing corporate and central power? Will it draw its inspiration from an American libertarian populism (admittedly, grossly tainted words in academic circles but not among the American people) that is purged of its churlish egoism, "free enterprise" spirit, and proprietarianism, just as the anarchists of Spain purged the Spanish villages of Andalusia and Aragon of the trammels of parochialism and Catholicism, while preserving their spirit of mutual aid and collectivism? These questions, I feel, can not be excluded from the discourse of the American left in trying to form a new agenda for the era that lies ahead, and Stanley Aronowitz is to be complimented for opening the arena for such a discourse among serious socialists.

Image Gallery of On "Remaking of the American Left"