: In 1861, during the second of his European tours, Tolstoy met with Proudhon, with whom he exchanged ideas. Inspired by the encounter, Tolstoy returned to Yasnaya Polyana to found thirteen schools that were the first attempt to implement a practical model of libertarian education. (From: Anarchy Archives.)
• "It is necessary that men should understand things as they are, should call them by their right names, and should know that an army is an instrument for killing, and that the enrollment and management of an army -- the very things which Kings, Emperors, and Presidents occupy themselves with so self-confidently -- is a preparation for murder." (From: "'Thou Shalt Not Kill'," by Leo Tolstoy, August 8,....)
• "There are people (we ourselves are such) who realize that our Government is very bad, and who struggle against it." (From: "A Letter to Russian Liberals," by Leo Tolstoy, Au....)
• "...the dissemination of the truth in a society based on coercion was always hindered in one and the same manner, namely, those in power, feeling that the recognition of this truth would undermine their position, consciously or sometimes unconsciously perverted it by explanations and additions quite foreign to it, and also opposed it by open violence." (From: "A Letter to a Hindu: The Subjection of India- Its....) 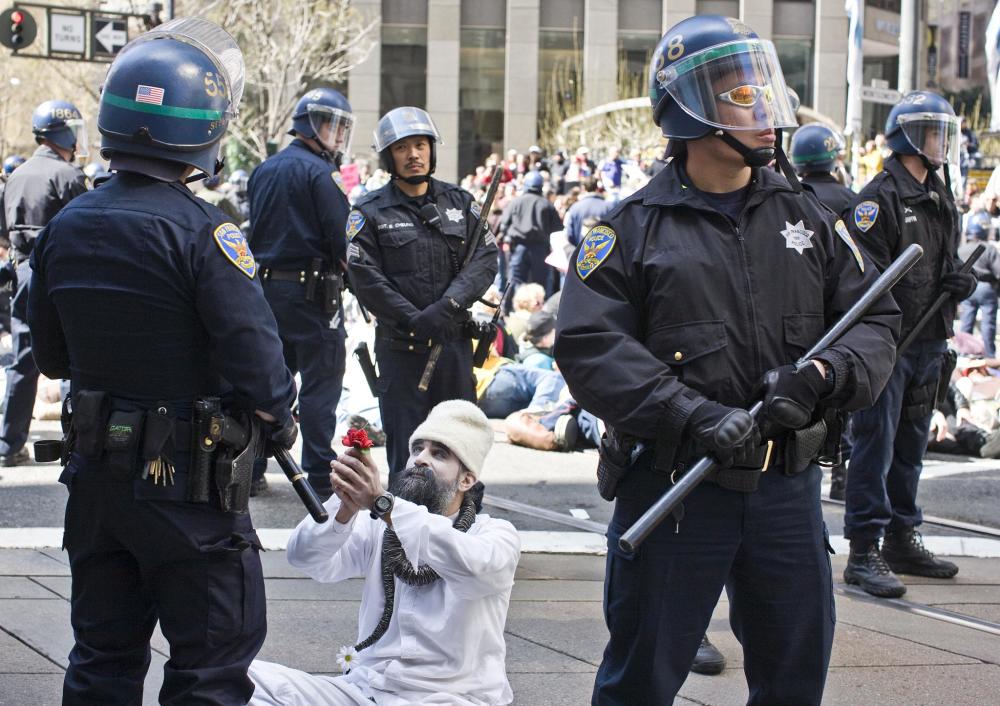 To people living in States founded upon violence, it seems that the abolition of the power of Government will necessarily involve the greatest of disasters.

But the assertion that the degree of safety and welfare which men enjoy is ensured by State power is altogether an arbitrary one. We know those disasters and such welfare as exist among people living under State organization, but we do not know the position in which people would be were they to get clear of the State. If one takes into consideration the life of those small communities which happen to have lived and are living outside great States, such communities, whilst profiting from all the advantages of social organization, yet being free from State coercion, do not experience one-hundredth part of the disasters which are undergone by people who obey State authority.

The people of the ruling classes for whom the State organization is advantageous speak most about the impossibility of living without State organization. But ask those who bear only the weight of State power, ask the agricultural laborers, the one hundred million peasants in Russia, and you will find they feel only its burden, and, far from regarding themselves as safer because of State power, they could altogether dispense with it. In many of my writings I have repeatedly endeavored to show that what intimidates men - the fear that without governmental power the worst men would triumph while the best would be oppressed - is precisely what has long ago happened, and is still happening, in all States, since everywhere the power is in the hands of the worst men; as, indeed, cannot be otherwise, because only the worst men could do all these crafty, dastardly and cruel acts which are necessary for participation in power. Many times I have endeavored to explain that all the chief calamities from which men suffer, such as the accumulation of enormous wealth in the hands of some people and the deep poverty of the majority, the seizure of the land by those who do not work on it, the unceasing armaments and wars, and the deprivation of men, flow only from the recognition of the lawfulness of governmental coercion. I have endeavored to show that before answering the question whether the position of men would be the worse or the better without Governments, one should solve the problem as to who makes up the Government. Are those who constitute it better or worse than the average level of men? If they are better than the average run, then the Government will be beneficent; but if they are worse it will be pernicious. And that these men - Ivan IV, Henry VIII, Marat, Napoleon, Arakcheyef, Metternich, Tallyrand, and Nicholas - are worse than the general run is proved by history.

In every human society there are always ambitious, unscrupulous, cruel men, who, I have already endeavored to show, are ever ready to perpetrate any kind of violence, robbery or murder for their own advantage; and that in a society without Government these men would be robbers, restrained in their actions partly by strife with those injured by them (self-instituted justice, lynching), but partly and chiefly by the most powerful weapon of influence upon men - public opinion. Whereas in a society ruled by coercive authority, these same men are those who will seize authority and will make use of it, not only without the restraint of public opinion, but, on the contrary, supported, praised and extolled by a bribed and artificially maintained public opinion.

It is said: 'How can people live without Governments and coercion?'. On the contrary, one should say: 'How can people, if they are rational beings, live recognizing violence and not rational agreement as the inner connecting link of their life?'.

One would think that this consideration would be conclusive to men recognizing themselves as rational beings. But those who defend State power do not think of man, of his qualities, of his rational nature; they speak of a certain combination of men to which they apply a kind of supernatural or mystical signification.

What will happen to Russia, France, Britain, Germany, say they, if people cease to obey Governments? What will happen to Russia? - Russia? What is Russia? Where is its beginning or its end? Poland? The Baltic Provinces? The Caucasus with all its nationalities? The Kazan Tartars? Ferghana Province? All these are not only not Russia, but all these are foreign nationalities desirous of being freed from the combination which is called Russia. The circumstance that these nationalities are regarded as parts of Russia is an accidental and temporary one, conditioned in the past by a whole series of historical events, principally acts of violence, injustice and cruelty, whilst in the present this combination is maintained only by the power which spreads over these nationalities. During our memory, Nice was Italy and suddenly became France; Alsace was France and became Prussia. The Trans-Amur Province was China and became Russia, Sakhalin was Russia and became Japan. At present the power of Austria spreads over Hungary, Bohemia and Galicia, and that of the British Government over Ireland, Canada, Australia, Egypt and India, that of the Russian Government over Poland and Guria. But tomorrow this power may cease. The only force uniting all these Russias, Austrias, Britains and Frances is coercive power, which is the creation of men who, contrary to their rational nature and the law of freedom as revealed by Jesus, obey those who demand of them evil works of violence. Men need only become conscious of their freedom, natural to rational beings, and cease to commit acts contrary to their conscience and the Law, and then these artificial combinations of Russia, Britain, Germany, France, which appear so splendid, will no longer exist, and that cause, in the name of which people sacrifice not only their life but the liberty proper to rational beings will disappear.

It is usual to say that the formation of great States out of small ones continually struggling with each other, by substituting a great external frontier for small boundaries, diminishes strife and bloodshed and their attendant evils. But this assertion also is quite arbitrary, as no-one has weighed the quantities of evil in the one and the other positions. It is difficult to believe that all the wars of the confederate period in Russia, or of Burgundy, Flanders and Normandy in France, cost as many victims as the wars of Alexander or of Napoleon or as the Japanese war lately ended. The only justification for the expansion of the State is the formation of a universal monarchy, the existence of which would remove all possibility of war. But all attempts at forming such a monarchy by Alexander of Macedon, by the Roman Empire, or by Napoleon, never attained this objective of pacification. On the contrary, they were the cause of the greatest calamities for the nations. So that the pacification of men cannot possibly be attained except only by the opposite means: the abolition of States with their coercive power.

There have existed cruel and pernicious superstitions, human sacrifices, burnings for witchcraft, 'religious' wars, tortures ... but men have freed themselves from these; whereas the superstition of the State as something sacred continues its hold upon men, and to this superstition are offered perhaps more cruel and ruinous sacrifices than to all the others. The essence of this superstition is this: that men of different localities, habits and interests are persuaded that they all compose one whole because one and the same violence is applied to all of them, and these men believe this, and are proud of belonging to this combination. This superstition has existed for so long and is so strenuously maintained that not only those who profit by it - kings, ministers, generals, the military and officials - are certain that the existence, confirmation and expansion of these artificial combinations is good, but even the groups within the combinations become so accustomed to this superstition that they are proud of belonging to Russia, France, Britain or Germany, although this is not at all necessary to them, and brings them nothing but evil. Therefore if these artificial combinations into great States were to be abolished by people, meekly and peacefully submitting to every kind of violence, while ceasing to obey the Government, then such an abolition would only lead to there being among such men less coercion, less suffering, less evil, and to its becoming easier for such men to live according to the higher law of mutual service, which was revealed to men two thousand five hundred years ago, and which gradually enters more and more into the consciousness of mankind.

In general for the Russian people, both the town and the country population it is, in such a critical time as the present, important above all not to live by the experience of others, not by others' thoughts, ideas, words, not by various social democracies, constitutions, expropriations, bureaux, delegates, candidatures and mandates, but to think with their own mind, to live their own life, constructing out of their own past, out of their own spiritual foundations new forms of life proper to this past and these foundations.

Image Gallery of The State