To Tramps, The Unemployed, the Disinherited, and Miserable

: In addition to defending the rights of African-Americans, Lucy spoke out against the repressed status of women in nineteenth century America. Wanting to challenge the notion that women could not be revolutionary, she took a very active, and often militant, role in the labor movement... (From: IWW.org.)
• "...be assured that you have spoken to these robbers in the only language which they have ever been able to understand, for they have never yet deigned to notice any petition from their slaves that they were not compelled to read by the red glare bursting from the cannon's mouths, or that was not handed to them upon the point of the sword." (From: "To Tramps, The Unemployed, the Disinherited, and ....)
• "...we are willing to work for peace at any price, except at the price of liberty." (From: "The Principles of Anarchism," by Lucy E. Parsons.)
• "I say to the wage class: Think clearly and act quickly, or you are lost. Strike not for a few cents more an hour, because the price of living will be raised faster still, but strike for all you earn, be content with nothing less." (From: "The Principles of Anarchism," by Lucy E. Parsons.)

To Tramps, The Unemployed, the Disinherited, and Miserable 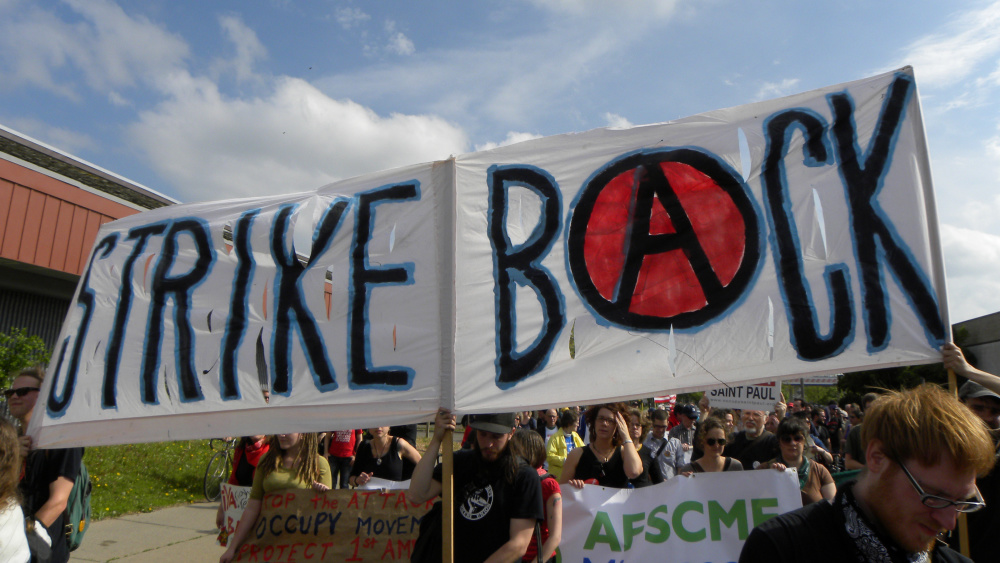 To Tramps
by Lucy E. Parsons
Alarm, October 4, 1884. Also printed and distributed as a leaflet by the International Working People's Association.

TO TRAMPS,
The Unemployed, the Disinherited, and Miserable.

A word to the 35,000 now tramping the streets of this great city, with hands in pockets, gazing listlessly about you at the evidence of wealth and pleasure of which you own no part, not sufficient even to purchase yourself a bit of food with which to appease the pangs of hunger now knawing at your vitals. It is with you and the hundreds of thousands of others similarly situated in this great land of plenty, that I wish to have a word.

Have you not worked hard all your life, since you were old enough for your labor to be of use in the production of wealth? Have you not toiled long, hard and laboriously in producing wealth? And in all those years of drudgery do you not know you have produced thousand upon thousands of dollars' worth of wealth, which you did not then, do not now, and unless you ACT, never will, own any part in? Do you not know that when you were harnessed to a machine and that machine harnessed to steam, and thus you toiled your 10, 12 and 16 hours in the 24, that during this time in all these years you received only enough of your labor product to furnish yourself the bare, coarse necessaries of life, and that when you wished to purchase anything for yourself and family it always had to be of the cheapest quality? If you wanted to go anywhere you had to wait until Sunday, so little did you receive for your unremitting toil that you dare not stop for a moment, as it were? And do you not know that with all your squeezing, pinching and economizing you never were enabled to keep but a few days ahead of the wolves of want? And that at last when the caprice of your employer saw fit to create an artificial famine by limiting production, that the fires in the furnace were extinguished, the iron horse to which you had been harnessed was stilled; the factory door locked up, you turned upon the highway a tramp, with hunger in your stomach and rags upon your back?

Yet your employer told you that it was overproduction which made him close up. Who cared for the bitter tears and heart-pangs of your loving wife and helpless children, when you bid them a loving "God bless you" and turned upon the tramper's road to seek employment elsewhere? I say, who cared for those heartaches and pains? You were only a tramp now, to be execrated and denounced as a "worthless tramp and a vagrant" by that very class who had been engaged all those years in robbing you and yours. Then can you not see that the "good boss" or the "bad boss" cuts no figure whatever? that you are the common prey of both, and that their mission is simply robbery? Can you not see that it is the INDUSTRIAL SYSTEM and not the "boss" which must be changed?

Now, when all these bright summer and autumn days are going by and you have no employment, and consequently can save up nothing, and when the winter's blast sweeps down from the north and all the earth is wrapped in a shroud of ice, hearken not to the voice of the hyprocrite who will tell you that it was ordained of God that "the poor ye have always"; or to the arrogant robber who will say to you that you "drank up all your wages last summer when you had work, and that is the reason why you have nothing now, and the workhouse or the workyard is too good for you; that you ought to be shot." And shoot you they will if you present your petitions in too emphatic a manner. So hearken not to them, but list! Next winter when the cold blasts are creeping through the rents in your seedy garments, when the frost is biting your feet through the holes in your worn-out shoes, and when all wretchedness seems to have centered in and upon you, when misery has marked you for her own and life has become a burden and existence a mockery, when you have walked the streets by day and slept upon hard boards by night, and at last determine by your own hand to take your life, - for you would rather go out into utter nothingness than to longer endure an existence which has become such a burden - so, perchance, you determine to dash yourself into the cold embrace of the lake rather than longer suffer thus. But halt, before you commit this last tragic act in the drama of your simple existence. Stop! Is there nothing you can do to insure those whom you are about to orphan, against a like fate? The waves will only dash over you in mockery of your rash act; but stroll you down the avenues of the rich and look through the magnificent plate windows into their voluptuous homes, and here you will discover the very identical robbers who have despoiled you and yours. Then let your tragedy be enacted here! Awaken them from their wanton sport at your expense! Send forth your petition and let them read it by the red glare of destruction. Thus when you cast "one long lingering look behind" you can be assured that you have spoken to these robbers in the only language which they have ever been able to understand, for they have never yet deigned to notice any petition from their slaves that they were not compelled to read by the red glare bursting from the cannon's mouths, or that was not handed to them upon the point of the sword. You need no organization when you make up your mind to present this kind of petition. In fact, an organization would be a detriment to you; but each of you hungry tramps who read these lines, avail yourselves of those little methods of warfare which Science has placed in the hands of the poor man, and you will become a power in this or any other land.

Learn the use of explosives!

Dedicated to the tramps by Lucy E. Parsons.

October 4, 1884
To Tramps, The Unemployed, the Disinherited, and Miserable — Publication.

Image Gallery of To Tramps, The Unemployed, the Disinherited, and Miserable