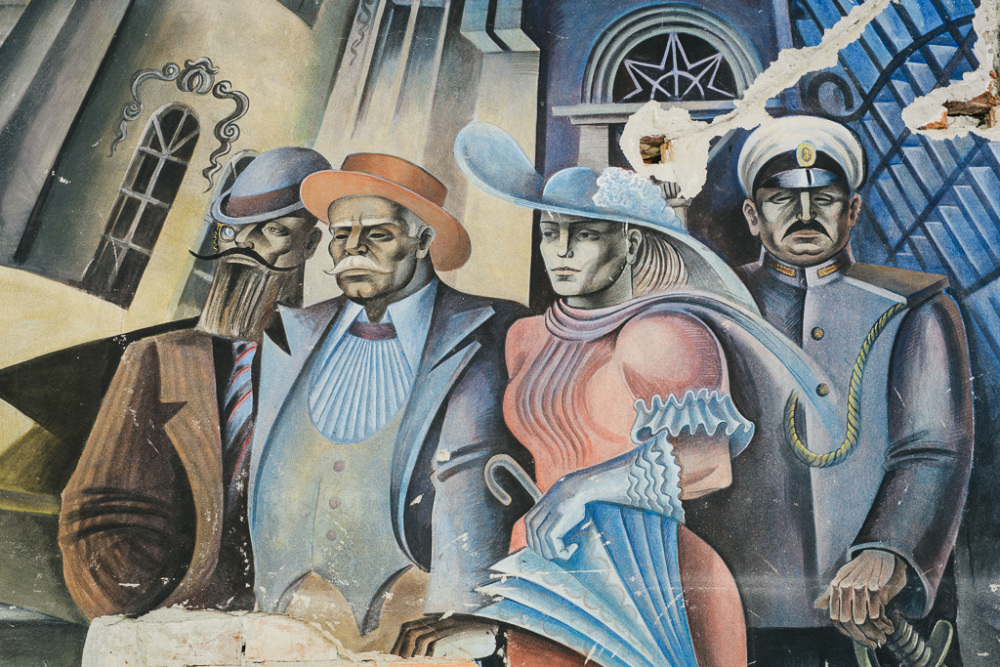 A pale, nervous, sick, and weak man sits at his writing desk. He scribbles notes on a sheet of paper. He is composing a symphony. He works diligently, using of all the trade secrets that he has learned. When the symphony is performed, a hundred and fifty men play in the orchestra; in the third movement, there are ten timpani, fifteen percussion instruments, and an organ; in the final movement, an eight part chorus of five hundred people is added as well as an extra orchestra of fifes and drums. The audience is mesmerized by the enormous force and the imposing vigor.

Our statesmen and politicians - and increasingly our entire ruling class - remind us of this composer who possesses no actual power, but allows the masses to appear powerful. Our statesmen and politicians also hide their actual weakness and helplessness behind a giant orchestra willing to obey their commands. In this case the orchestra are the people in arms, the military.

The angry voices of the political parties, the complaints of the citizens and the workers, the clenched fists in the pockets of the people - none of this has to be taken seriously by the government. These actions lack any real force because they are not supported by the elements that are naturally the most radical in each people: the young men from twenty to twenty-five. These men are lined up in the regiments under the command of our inept government. They follow every order without question. It is they who help camouflage the government's true weaknesses, allowing them to remain undetected - both within our country as much as outside of it.

We socialists know how socialism, i.e., the immediate communication of true interests, has been fighting against the rule of the privileged and their fictitious politics for over one hundred years. We want to continue and strengthen this powerful historical tendency, which will lead to freedom and fairness. We want to do this by awakening the spirit and by creating different social realities. We are not concerned with state politics.

If the powers of un-spirit and violent politics at least retained enough force to create great personalities, i.e., strong politicians with vision and energy, then we might have respect for these men even if they were in the enemy's camp. We might even concede that the old powers will continue to hold onto power for some time. However, it is becoming increasingly obvious that the state is not based on men of strong spirit and natural power. It is increasingly based on the ignorance and passiveness of the people. This goes even for the unhappiest among them, for the proletarian masses. The masses do not yet understand that they must flee the state and replace it, that they must build an alternative. This is not only true in Germany; it is also the case in other countries.

On the one side, we have the power of the state and the powerlessness of the masses, which are divided into helpless individuals - on the other side, we have socialist organization, a society of societies, an alliance of alliances, in other words: a people. The struggle between the two sides must become real. The power of the states, the principle of government and those who represent the old order will become weaker and weaker. The entire system would vanish without a trace if the people began to constitute themselves as a people apart from the state. However, the people have not yet grasped this. They have not yet understood that the state will fulfill a certain function and remain an inevitable necessity as long as its alternative, the socialist reality, does not exist.

A table can be overturned and a window can be smashed. However, those who believe that the state is also a thing or a fetish that can be overturned or smashed are sophists and believers in the Word. The state is a social relationship; a certain way of people relating to one another. It can be destroyed by creating new social relationships; i.e., by people relating to one another differently.

The absolute monarch said: I am the state. We, who we have imprisoned ourselves in the absolute state, must realize the truth: we are the state! And we will be the state as long as we are nothing different; as long as we have not yet created the institutions necessary for a true community and a true society of human beings.