Witness for the Prosecution

: ...lived with the title of Britain's most famous anarchist for nearly half a Â­century, bemused by this ambivalent sobriquet. In Anarchy in Action (1973), he set out his belief that an anarchist society was not an end goal. (From: Guardian Obituary.)
• "The anarchists, who have always distinguished between the state and society, adhere to the social principle, which can be seen where-ever men link themselves in an association based on a common need or a common interest." (From: "Anarchism as a Theory of Organization," by Colin ....)
• "...the bombs you are worried about are not the bombs which cartoonists attribute to the anarchists, but the bombs which governments have perfected, at your expense." (From: "Anarchism as a Theory of Organization," by Colin ....)
• "It is, after all, the principle of authority which ensures that people will work for someone else for the greater part of their lives, not because they enjoy it or have any control over their work, but because they see it as their only means of livelihood." (From: "Anarchism as a Theory of Organization," by Colin ....)

Witness for the Prosecution 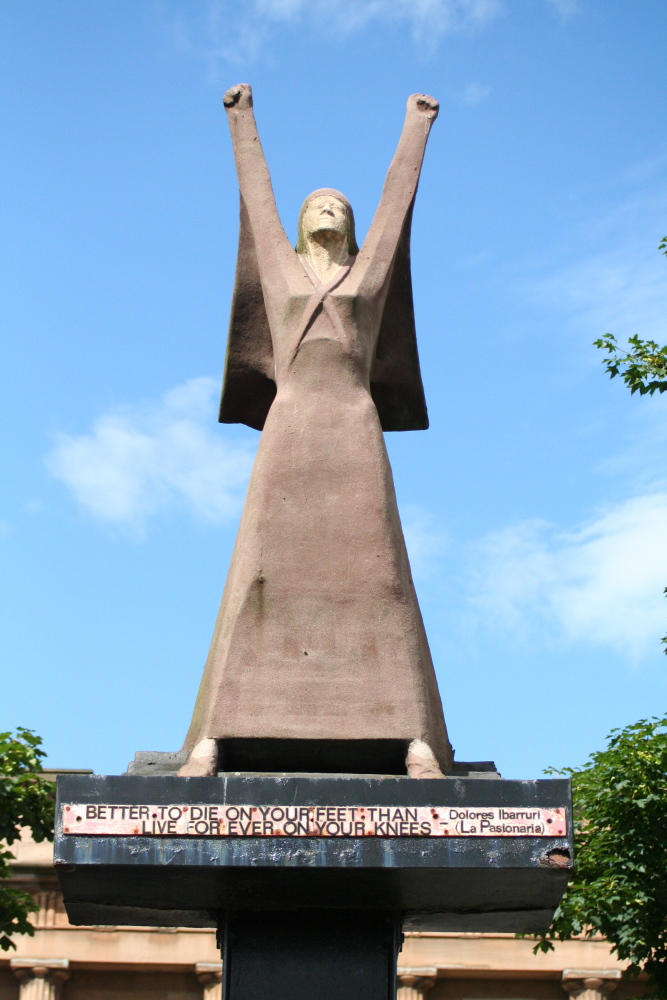 The revival of interest in anarchism at the time of the Spanish Revolution in 1936 led to the publication of Spain and the World, a fortnightly Freedom Press journal which changed to Revolt! in the months between the end of the war in Spain and the beginning of the Second World War. Then War Commentary was started, its name reverting to the traditional Freedom in August 1945.

As one of the very few journals which were totally opposed to the war aims of both sides, War Commentary was an obvious candidate for the attentions of the Special Branch, but it was not until the last year of the war that serious persecution began.

In November 1944 John Olday, the paper’s cartoonist, was arrested and after a protracted trial was sentenced to 12 months’ imprisonment for ‘stealing by finding an identity card’. Two months earlier T. W. Brown of Kingston had been jailed for 15 months for distributing ‘seditious’ leaflets. The prosecution at the Old Bailey had drawn the attention of the court to the fact that the penalty could have been 14 years.

On 12 December 1944, officers of the Special Branch raided the Freedom Press office and the homes of four of the editors and sympathizers. Search warrants had been issued under Defense Regulation 39b, which declared that no person should seduce members of the armed forces from their duty, and Regulation 88a which enabled articles to be seized if they were evidence of the commission of such an offense. At the end of December, Special Branch officers, led by Detective Inspector Whitehead, searched the belongings of soldiers in various parts of the country. I was in a Military Detention Camp at the time and was escorted back to my own unit at Stromness, Orkney, where the commanding officer searched my belongings and my mail and retained various books and papers. Shortly afterwards I was released from detention and applied for the return of my property. The officer said he had no authority to return them, and a day or two later I was sent for to be interviewed by Inspector Whitehead. I wrote to Lilian Wolfe telling her about these events, but (as I learned later) the military censor obliterated the greater part of my letter. I wrote a further letter and got it posted by a civilian on the mainland of Scotland. This was subsequently passed back to me at the trial. After much searching I have found this letter, and I see that I wrote: Whitehead drew my attention to the article ‘All Power to the Soviets’ in the November War Commentary, and to the duplicated Freedom Press Forces Letter of about the same date, and asked if I had read them. I said Yes. He pointed to one paragraph in the article, referring to the revolutionary effect of Soldiers Councils in Russia in 1917, and to a paragraph in the letter, which asked its readers in general terms about the existence and use of Soldiers Councils. He asked what conclusion I drew from these two articles in conjunction, and whether I considered them an incitement to mutiny. I gave a noncommittal reply.

He said, looking at some of the newspaper cuttings: ‘I see you’re interested in the case of T. W. Brown.’ He then made some observations about the case, and I said: ‘I don’t think that was said at the trial.’ Whitehead replied: ‘I ought to know. I’m the man that put him inside.’

Meanwhile in January Philip Sansom was jailed for two months ‘for being in possession of an army waterproof coat and for failing to notify a change of address’ — crimes uncovered when he was raided.

On 22 February 1945 Marie Louise Berneri, Vernon Richards and John Hewetson were arrested at 7.30 in the morning and charged with offenses under Defense Regulation 39a. At the court they were joined by Philip Sansom who had been brought from Brixton Prison. They appeared four times at Marylebone Magistrates Court and their trial took four days at the Old Bailey. On 26 April Richards, Hewetson and Sansom were found guilty and each was sentenced to nine months’ imprisonment. Marie Louise Berneri was found not guilty and discharged on a technicality which infuriated her. Marie Louise was married to Vernon Richards, and her defense counsel had simply to point out that, since husband and wife are legally as one, a wife cannot be accused of conspiracy with her husband! Although Marie Louise was furious about this, she was not as furious as Inspector Whitehead, who realized he had dropped a clanger.

The judge was Norman Birkett and the prosecution was conducted by the Attorney General (Sir Donald Somerville). But the whole prosecution case was simply that laid down by Inspector Whitehead: to connect the circular letter sent to the hundred or so members of the forces who were subscribers to War Commentary with various articles on the history of soldiers’ councils in Germany and Russia in 1917 and 1918, and on the situation in European resistance movements which, as the Allied armies advanced in 1944, were being urged to hand over their arms to the governments then being set up under military auspices. One of the headlines in War Commentary, for example, demanded ‘Hang on to Your Arms!’ and this was used by the prosecution to show that the paper was telling British soldiers to keep their rifles for possible revolutionary action. The article was in fact — and the context made it clear — addressed to the Belgian underground, after the Germans had withdrawn, but before a new government had been imposed upon them. Much of the prosecution’s ‘evidence’ was as flimsy as this.

The defense solicitor was a man named Rutledge, who was overshadowed by his clerk, the genial and flamboyant Ernest Silverman, a tragic character most of whose life was spent in prison for innumerable cases of petty embezzlement (he later died in Parkhurst serving a long sentence of preventive detention). The Freedom Press trial was probably his finest hour. He was certainly a good and honest friend to the defendants, and they in later years made great efforts to alleviate his lot. Ernest briefed some very eminent barristers: John Maude (later a Tory MP and a judge) to defend Hewetson and Richards, Derek Curtis Bennett for Marie Louise, and James Burge for Philip Sansom. Here of course were the tactical dilemmas for anarchists. Having engaged an expensive defense you put yourselves in their hands, and the defense line was that here were four upright citizens (Richards was working as a civil engineer at the time and Hewetson was casualty officer at Paddington Hospital) putting forward their idealistic point of view with no intention of causing disaffection. The four soldiers called by the prosecution (including me) to establish that the offending material had been received by them, testified for the defense that they had not been disaffected.

None of the accused liked the way their case was presented. Marie Louise in particular wanted to defend herself and did not want to rely on the technicalities of the law for an acquittal. On the other hand, if the object of the whole proceedings was to silence the Freedom Press it would have been foolish to strike intransigent attitudes and get, in consequence, far longer sentences. In the event, she and George Woodcock were able to carry on the work of the paper during the period when their comrades were in jail.

A Freedom Press Defense Committee was organized to raise funds for the defense (energetically collected by Simon Watson Taylor — who was also raided by the police, who, discovering his fascinating library, declared their anxiety to join the surrealist movement!) and this won the support of many public figures — George Orwell, Herbert Read, Harold Laski, Kingsley Martin, Benjamin Britten, Augustus John, Bertrand Russell and many others. It subsequently became the Freedom Defense Committee, which was involved in many other civil liberties issues. I ought to explain that at that time the National Council for Civil Liberties was dominated by the Communist Party and was totally uninterested in the defense of anti-patriotic people because of the alliance with Stalin. Its principal activity at that time was demanding that Sir Oswald Mosley should be put back in prison — and hanged.

The particular regulation under which the Freedom Press trial was conducted was rescinded very shortly after the editors were jailed, though its provisions were substantially the same as those of the Incitement to Disaffection Act. After all these years, two questions remain. Were the defense tactics correct? And why was the prosecution brought in the first place? On the first question, I think that there is a world of difference between the individual prepared to face martyrdom for a cause, or for its propaganda effect, and a group of people who have a functional task to perform: the production of a newspaper. (And in spite of Herbert Read’s rhetoric at the time about the ‘hundreds who were willing to step into their place’, the truth was that there were pitifully few.) There was every reason to suppose that if the defendants (who incidentally were not the authors of the alleged subversion) had not adopted the usual rigmarole of defense, they would have got very long sentences. As it was, they were given shorter sentences than T. W. Brown or John Olday, whose ‘crimes’ were much more trivial. They emerged to make Freedom the outstanding journal that it was in the late 1940s.

The second question is very hard to answer. Actually the state and the armed forces had very little to fear from the anarchists. There was not the slightest threat of the kind of mutiny that was so savagely repressed in, say, the French army in 1917. The government obviously took the trial seriously since the Attorney General himself prosecuted. Who ordered the trial? Was it the War Department under Sir Edward Grigg? Or the Home Secretary, the vindictive Herbert Morrison? Or was it just our old friends of the Special Branch intent on proving what diligent fellows they are?

My own marginal part in the proceedings brought me a rich reward. The defendants became my closest and dearest friends.

1974
Witness for the Prosecution — Publication.

Image Gallery of Witness for the Prosecution