American Anarchist, Feminist, and Freethinker, With Roots in Individualism and Collectivism

: Yet the ascetic also had the soul of a poet. In her poetry and even in her prose, Voltairine eloquently expressed a passionate love of music, of nature, and of Beauty. (From: The Storm!.)
• "...Life cries to live, and Property denies its freedom to live; and Life will not submit." (From: Direct Action.)
• "For the basis of all political action is coercion; even when the State does good things, it finally rests on a club, a gun, or a prison, for its power to carry them through.)" (From: Direct Action.)
• "...political action is never taken, nor even contemplated, until slumbering minds have first been aroused by direct acts of protest against existing conditions." (From: Direct Action.)

(The last word of Angiolillo.) 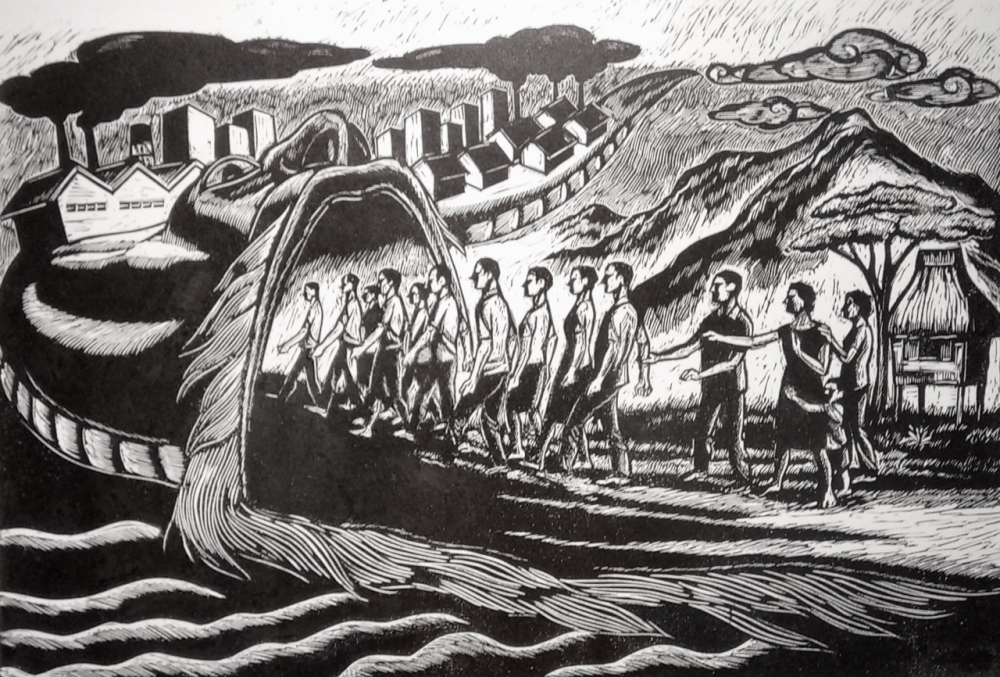 GERMINAL!--The Field of Mars is plowing,
And hard the steel that cuts, and hot the
breath
Of the great Oxen, straining flanks and bowing
Beneath his goad, who guides the share of Death.

GERMINAL!--The Dragon's teeth are sowing,
And stern and white the sower flings the seed
He shall not gather, though full swift the growing;
Straight down Death's furrow treads, and does not
heed.

GERMINAL!--The Helmet Heads are springing
Far up the Field of Mars in gleaming files;
With wild war notes the bursting earth is ringing.

Within his grave the sower sleeps, and smiles.

(To the Czar, on a woman it political prisoner, being flogged to death
in Siberia. )

HOW many drops must gather to the skies
Before the cloud-burst comes, we may not
know;
How hot the fires ill under hells must glow
Ere the volcano's scalding lavas rise,
Can none say; but all wot the hour is sure!
Who dreams of vengeance has but to endure
He may not say how many blows must fall,
How many lives be broken on the wheel,
How many corpses stiffen 'neath the pall,
How many martyrs fix the blood-red seal;
But certain is the harvest time of Hate!
And when weak moans by an indignant world
Reechoed, to a throne are backward hurled,
Who listens hears the mutterings of Fate!

(Where the torturer Canovas breathed his last.)

SANTA AGUEDA, thou that wast accursed
With presence of a demon dressed in Man,
Blessed art thou, for on thy stones there ran
The vampire blood from bitter torture nursed;
Along thy streets there flashed the lightning -burst,
"Delivered!" flaming on from eye to eye,
Though lips said "killed," and all thy gateways
hearsed
In lying black, made mourning mockery.
Blessed art thou! From thee went forth the cry,
"Vengeance yet loves, Renunciation hates,
And justice smites: the torturer shall die;"
Across his path the steel-nerved slayer waits
"And both shall burn together,"--one in light
Of unconsuming hell and reddened night;
And one with feet on hell and brow dawn-rayed, pure
white.

THE FEAST OF VULTURES


(As the three anarchists, Vaillant, Henry and Caserio, were led to
their several executions, a voice from the prison cried loudly, "Vive
l'anarchie!" Through watch and ward the cry escaped, and no man
owned the voice; but the cry is still resounding through the world.)

AMOAN in the gloam in the air-peaks heard--
The Bird of Omen--the wild, fierce Bird,
Aflight
In the night,
Like a whiz of light,
Arrowy winging before the storm,
Far away flinging,
The whistling, singing,
White-curdled drops, wind-blown and warm
From its beating, flapping,
Thunderous wings;
Crashing and clapping
The split night swings,
And rocks and totters,
Bled of its levin,
And reels and mutters
A curse to Heaven!
Reels and mutters and rolls and dies,
With a wild light streaking its black,
blind eyes.
Far, far, far,
Through the red, mad morn,
Like a hurtling star,
Through the air upborne,
The Herald-Singer,
The Terror-Bringer,
Speeds--and behind, through the cloud-rags torn,
Gather and wheel a million wings,
Clangiug as iron where the hammer rings
The whipped sky shivers,
The White Gate shakes,
The ripped throne quivers,
The dumb God wakes,
And feels in his heart the talon-stings--
The dead bodies hurled from beaks for slings.
"Ruin! Ruin!" the Whirlwind cries,
And it leaps at his throat and tears his eyes;
"Death for death, as ye long have dealt;
The heads of your victims your head shall pelt;
The blood ye wrung to get drunk upon,
Drink, and be poisoned! Ott, Herald, on!"

Behold, behold,
How a moan is grown!
A cry hurled high 'gainst a scaffold's joist!
The Voice of Defiance-the loud, wild Voice!
Whirled
Through the world,
A smoke-wreath curled
(Breath 'round hot kisses) around a fire!
See! the ground hisses
With curses, and glisses
With red-streaming blood-clots of long-frozen ire,
Waked by the flying
Wild voice as it passes;
Groaning and crying,
The surge of the masses
Rolls and flashes

With thunderous roar-
Seams and lashes
The livid shore ---
Seams and lashes and crunches and beats
And drags a ragged wall to its howling retreats!
Swift, swift, swift,
'Thwart the blood-rain's fall,
Through the fire-shot rift
Of the broken wall,
The prophet-crying,
The storm-strong sighing,
Flies-and from under Night's lifted pall,
Swarming, menace ten million darts,
Uplifting fragments of human shards
Ah, white teeth chatter,
And dumb jaws fall,
While winged fires scatter
Till gloom gulfs all
Save the boom of the cannon that storm the forts
That the people bombard with their comrades' hearts;
"Vengeance! Vengeance!" the voices scream,
And the vulture pinions whirl and stream!
"Knife for knife, as ye long have dealt;
The edge ye whetted for us be felt,
Ye chopper of necks, on your own! your own!
Baer it, Coward! On, Prophet, on!"

NIGHT AT THE GRAVE IN WALDHEIM

QUIET they lie in their shrouds of rest,
Their lids kissed close 'neath the lips of peace;
Over each pulseless and painless breast
The hands lie folded and softly pressed,
As a dead dove presses a broken nest
Ah, broken hearts were the price of these

The lips of their anguish are cold and still,
For them are the clouds and the gloom all past
No longer the woe of the world can thrill
The chords of those tender hearts, or fill
The silent dead-house! The " people's will"
Has snapped asunder the strings at last.

"The people's will! " Ali, in years to come,
Dearly ye'll weep that ye did not save!
Do ye not hear now the muffled drum,
The trampling foot and the ceaseless hum
Of the million marchers,--trembling, dumb,
In their tread to a yawning, giant grave?

("We are the birds of the coming storrn."-August Spies.)

THE tide is out, the wind blows off the shore;
Baer burn the white sands in the scorching sun;
The sea complains, but its great voice is low.

Bitter thy woes, 0 People,
And the burden
Hardly to be borne!
Wearily grows, 0 People,
All the aching
Of thy pierced heart, bruised and torn
But yet thy time is not,
And low thy moaning.
Desert thy sands!
Not yet is thy breath hot,
Vengefully blowing;
It wafts o'er lifted hands.


The tide has turned; the vane veers slowly round;
Slow clouds are sweeping o'er the blinding light;
White crests curl on the sea,-its voice grows deep.
Angry thy heart, 0 People,
And its bleeding
Fire-tipped with rising hate!
Thy clasped hands part, 0 People,
For thy praying
Warmed not the desolate!
God did not hear thy moan:
Now it is swelling
To a great drowning cry;
A dark wind-cloud, a groan,
Now backward veering
From that deaf sky!

The tide flows in, the wind roars from the depths,
The whirled-white sand heaps with the foam-white
waves;
Thundering the sea rolls o'er its shell-crunched wall!

Strong is thy rage, 0 People,
In its fury
Hurling thy tyrants down!
Thou metest wage, 0 People.
Very swiftly,
Now that thy hate is grown:
Thy time at last is come;
Thou heapest anguish,
Where thou thyself wert bare!
No longer to thy dumb
God clasped and kneeling,
Thou answerest thine own prayer.

BACK to thy breast, 0 Mother, turns thy child,
He whom thou garmentedst in steel of truth,
And sent forth, strong in the glad heart of youth,
To sing the wakening song in ears beguiled
By tyrants' promises and flatterers' smiles;
These searched his eyes, and knew nor threats nor
wiles,
Might shake the steady stars within their blue,
Nor win one truckling word from off those lips,-
No-not for gold nor praise, nor aught men do
To dash the Sun of Honor with eclipse.
0, Mother Liberty, those eyes are dark,
And the brave lips are white and cold and dumb;
But fair in other Souls, through time to come,
Fanned by thy breath glows the Immortal Spark.

(After an incarceration of seven long years in Joliet State Prison for
an act of which they were entirely innocent, namely, the throwing of
the Haymarket bomb, in Chicago, May 4, 1886, Oscar Neebe, Michael
Schwab, and Samuel Fielden were liberated by Governor Altgeld, who
thus sacrificed his political career to an act of justice. Honor him.)

THERE was a tableau ! Liberty's clear light
Shone never on a braver scene than that.
Here was a prison, there a man who sat
High in the halls of state! Beyond, the might
Of ignorance and mobs, whose hireling press
Yells at their bidding like the slaver's hounds,
Ready with coarse caprice to curse or bless,
To make or unmake rulers!--Lo, there sounds
A grating of the doors! And three poor men,
Helpless and hated, having naught to give,
Come from their long-sealed tomb, look up, and live,
And thank this man that they are free again.
And he--to all the world this man dares say,
" Curse as you will! I have been just this day."

(The figure on the monument over the grave of the Chicago Martyrs
in Waldheim Cemetery is a warrior woman, dropping with her left
hand a crown upon the forehead of a fallen man just past his agony,
and with her right drawing a dagger from her bosom.)


LIGHT upon Waldheim! And the earth is gray;
A bitter wind is driving from the north;
The stone is cold, and strange cold whispers say:
"What do ye here with Death ? Go forth! Go
forth ! "

Is this thy word, 0 Mother, with stern eyes,
Crowning thy dead with stone- caressing touch ?
May we not weep o'er him that martyred lies,
Slain in our name, for that he loved us much ?

May we not linger till the day is broad ?
Nay, none are stirring in this stinging dawn--
None but poor wretches that make moan to God :
What use are these, 0 thou with dagger drawn ?

"Go forth, go forth ! Stand not to weep for these,
Till, weakened with your weeping, like the snow
Ye melt, dissolving in a coward peace! "
Light upon Waldheim! Brother, let us go!

Image Gallery of The Worm Turns