...Parsons spoke at the laborers demonstration in Haymarket Square on May fourth, 1886. That morning at around 10 a.m. 180 policemen arrived at the scene and told the crowd to disperse. At this point, a bomb was thrown at the police from an alleyway. 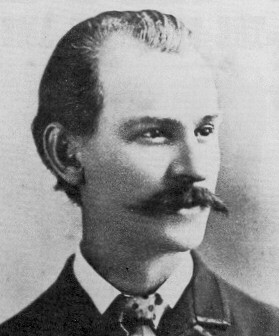 A Summary of the Life of Albert Parsons
By Evan Kelley

Haymarket Martyr Albert Parsons was born on June 24th, 1848. At age five, he was orphaned and subsequently was raised by an African American slave named Esther. It is probable that this experience helped to shape his egalitarian views on race. However, he still served in the Confederate army under his brother, Major William Parsons. After the war he openly condemned slavery and began to develop as a socialist. He began to publish a journal called the Spectator, which argued for equal rights for African Americans.

In 1873, Parson married Lucy Waller. Lucy was half Creek Indian and half Mexican and, while initially living in Texas, conservative general disapproval and further pressure from the Ku Klux Klan caused the two to move to Chicago. It was here that both Albert and Lucy joined the Socialist Labor Party in 1876. They also helped to found the International Working People Association (IWPA), a labor organization that promoted racial and sexual equality. Furthermore, Parsons became the editor of the radical journal, Alarm.

In the midst of the labor strike for an eight hour work day, and in protest to the police brutality that caused the deaths of four workers, Parsons spoke at the laborers demonstration in Haymarket Square on May fourth, 1886. That morning at around 10 a.m. 180 policemen arrived at the scene and told the crowd to disperse. At this point, a bomb was thrown at the police from an alleyway. The explosion killed eight men (one, a police officer) and injured dozens more. The police immediately attacked. Several were killed, hundreds were injured.

Witnesses identified Rudolph Schnaubelt as the bomb thrower, though arrested, he was released without charge. He soon fled to Argentina and was never heard from again. It would later be suspected and claimed by some that Schnaubelt was actually paid by the police to throw the bomb to start the pandemonium and break up the demonstration. After Scnaubelt's release, the police arrested Samuel Fielden, August Spies, Adolph Fisher, Louis Lingg, Oscar Neebe, Michael Schwab and George Engel. They sought to arrest Parsons as well, but he fled. Nevertheless, on the first day of trial, Parsons appeared in court by his free will to stand by his comrades.

During the trial, a number of witnesses were able to prove that none of the eight convicted had thrown the bomb. At this point, prosecution set towards charging all eight with conspiracy to commit murder, arguing that speeches and articles written by the individuals influenced the unknown bomber to his actions. Written works, as well as conversations reported by infiltrators (the police had spies that infiltrated anarchist meetings), were used to show that the men thought violence could be used as a revolutionary tool. Sadly, despite the lack of evidence and the preposterous charge, all eight men were found guilty. Parsons, Spies, Fisher, Lingg, Engel were sentenced to death. Neebe, Fielden and Scwab were sentenced to life imprisonment. Parsons was killed by hanging on November 10, 1887.

From : "A Summary of the Life of Albert Parsons," by Evan Kelley, from Anarchy Archives

Anarchism: Its Philosophy and Scientific...

Parsons, A.R. (1887). Anarchism: Its Philosophy and Scientific Basis. Chicago, Mrs. A. R. Parsons [c1887]. PART II CHAPTER I. ANARCHY ON TRIAL. "Black says they are humanitarians. Don't try, gentlemen, to shirk the issue. Anarchy is on trial; the defendants -are on trial for treason and murder." Mr. Black-- The indictment does not charge treason; does it, Mr. Grinnell? Mr. Grinnell -No, sir.-Extract from closing speech of the State's Attorney. Not until this announcement, in the closing words of the last speech by the attorney representing the State, were the eight defendants apprized, officially, or otherwise, that the question at issue was anarchy; for professing which, a verdict of death was then demanded. This announ... (From: Anarchy Archives.)
privileged class
supply and demand
political
chattel slavery
free speech
city of chicago
states
parsons
productive capital
anarchists

We continually have it harped in our ears that we are free and equal. That every avenue is open alike to all and all can climb to the top. The road to wealth is open alike to all. This is the sophistry the rich are continually giving to the poor to arouse their hopes and make them contented with their down-trodden condition. The doctrine is both false and stupid. There is no fool stupid enough to think everyone can get on top, though he has a perfect right if he can. Everyone knows that by the very nature of things not one in ten can possibly get there, and not one-tenth of that number can stay there after they get there. What, then, does all this twaddle amount to about everyone having a perfect right to climb to the top of the pile... (From: TheAnarchistLibrary.org.)

The Great Anarchist Trial: The Haymarket Speeches As Delivered On The Evening Of The Throwing Of The Bomb, At Haymarket Square, Chicago, May 4, 1886, By: August Spies and Albert R. Parsons 1886 Published by the Chicago labor press association Room 17, No, 76 and 78 Fifth Ave., Chicago NOTE. The Chicago Times of August 10 contained the following statements, among others, in regard to the great trial: "The climax in the Anarchist trial was reached yesterday. Schwab, Spies and Parsons told their respective stories to the jury from the witness-chair, to a spell-bound audience of spectators, an amazed jury, and a surprised judge. * * * Parsons was composed and eloquent. * * * His brother, General W. H. Parsons... (From: Anarchy Archives.)
system of industry
labor
classes
ballot
liberty
capitalistic
american
1877
military
anarchists

Manifesto of the International Working P...

The Pittsburgh Manifesto to the Workingmen of America FELLOW-WORKMEN: The Declaration of Independence says: “…But when a long train of abuses and usurpations, pursuing invariably the same object, evinces a design to reduce them (the people) under absolute Despotism, it is their right, it is their duty to throw off such government and provide new guards for their future security.” This thought of Thomas Jefferson was the justification for armed resistance by our forefathers, which gave birth to our Republic, and do not the necessities of our present time compel us to reassert their declaration? Fellow-Workmen, we ask you to give us your attention for a few moments. We ask you candidly to read th... (From: TheAnarchistLibrary.org.)