He was a well-known anarchist leader in the United States and life-long friend of Emma Goldman, a young Russian immigrant whom he met on her first day in New York City. The two became lovers and moved in together, remaining close friends for the rest of Berkman's life. 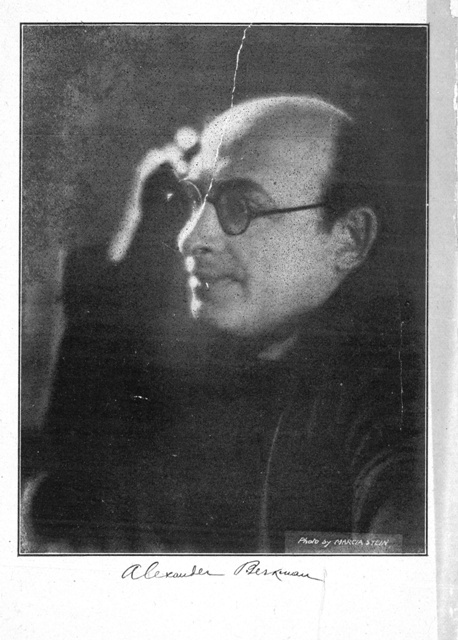 Alexander Berkman was born in Russia in 1870. It was a time of revolutionary upheaval, and Berkman was influenced by his uncle Maxim, later exiled to Siberia for his revolutionary activity. Joining a group of students who read the literature of the Nihilists and other prohibited organizations, Berkman was eventually expelled from school. Finding most professions barred to him, he emigrated to America. On his arrival in 1888, he quickly became involved in the anarchist movement, but, although in some ways strong, it was a divided movement.

The United States at the time was opening its gates to many thousands of new arrivals, many of them from Europe. These people tended to live in the same communities as others from their country, and work in the same places. Shops, bars, and newspapers would cater for each community, usually in their native language. In Europe, the anarchist and revolutionary socialist movements were relatively strong. There was no parallel in North America, and the trade union movement was still finding its feet.

The revolutionary movement, then, tended to be split into many nationalities. These groups were often made up of activists, like Berkman, who had to leave their home countries because of their activities. There were also divisions between anarchists, Marxists, and so on. The relations between these groups were often quite good, and there were large campaigns that brought all groups together, but the language and cultural divisions remained an issue.

The crisis point in Berkman's life came in 1892, when he was only 22. At the time, the steelworkers of Pittsburgh were some of the most highly skilled and best-organized workers in the country. When their contracts came up for review, Henry Clay Frick, the chairman of the Carnegie Company, refused outright to deal with the union. He fired all of the workers, and said they would have to apply individually for their jobs, an open attack on the union. Support meetings for the workers were held all across America, but Frick brought in hundreds of strikebreakers - Pinkerton Detectives (1). Then, in July, two months after the strike started, eleven strikers were shot by the Pinkertons. The die was cast.

Berkman traveled to Pittsburgh to kill Frick, an assassination he hoped would strike against the capitalist class, as well as avenge the deaths of the steelworkers. But his attempt failed, despite his shooting Frick three times, and stabbing him with a poisoned blade. Nevertheless, he was sentenced to 22 years in prison (more than three times the then maximum for attempted murder). Clearly the same courts that had convicted the Haymarket Eight, had decided that an example was to be made of him. And this, at the age of only 22.

Berkman eventually spent 14 years in prison, many of them in solitary confinement, and was often denied visits for years at a time. His only communication with the outside world was through smuggled letters. When he got out he was almost broken by his experiences, and it took him years to come to himself again. Yet even those years of recovery were filled with activity, editing Mother Earth magazine, and helping found the Ferrer School in New York.

With the publication of 'Prison Memoirs of an Anarchist', he came to terms with his experiences and gained a new lease of life. He was at the heart of the unemployed movement in New York, and one of the driving figures of the anti-war movement in America. For this he was jailed, for another two years, and in 1919 deported, along with Emma Goldman and many other revolutionaries, to the Soviet Union.

He spent two years in Russia, before exile in Germany and France. His book, 'The Bolshevik Myth', shows how at first he had tried to convince himself that the spirit of revolution still lived in Russia, and his anger and horror when the Bolsheviks massacred the sailors of Kronstadt, and with them the last hopes of freedom and socialism.

Although he remained an important figure in Europe, and continued writing, The 'ABC of Anarchism' was published in 1929, his poverty, and continual harassment by the authorities had made him old before his time, and he had less strength now to carry on the struggle. In 1936, seriously ill, he committed suicide, just weeks before the outbreak of the Spanish Revolution.

From a young age, Alexander Berkman was an exile, and he spent almost twenty years in prison, yet when he was free, he was at the heart of every important struggle, and he was a prodigious writer. 'The ABC of Anarchism' is still an essential starting point for any anarchist, and, together with his Memoirs, displays his burning desire for freedom, as well as the wisdom he paid dearly for.

1 The Pinkertons were not detectives as we would imagine them today, but were more like a small mercenary army. Quite often they were hired to infiltrate unions and pass on information, or simply served as hired muscle.

From : By Ray Cunningham, Published by Workers Solidarity No 56 in March 1999

From : "The Russian Tragedy," by Alexander Berkman, The Russian Revolution Series, No.1, section I

From : "The Russian Tragedy," by Alexander Berkman, The Russian Revolution Series, No.1, section IV