On the 15 Durruti arrived with a force of 1800 men to reinforce the defense of Madrid, where they went immediately to the toughest section and on the 19 he was struck by a bullet as he walked by a supposedly secure area. 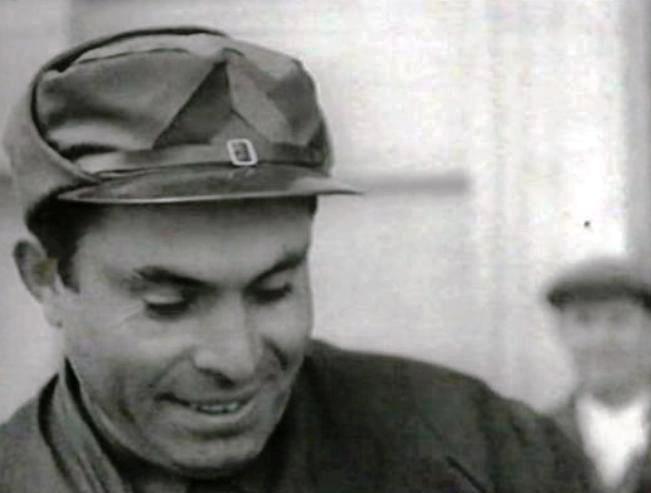 Getting to Know Durruti

To condense in a few lines the life story of he who was the true expression of rebelliousness and anarchist utopia is a complicated but necessary task, because the testimony of liberty in struggle that was the life of Buenaventura Durruti must be broadcast yesterday, today and always.

He was born the second of eight brothers on July 14 1896 in Leon, city of the Spanish province by the same name. As an adolescent he is initiated on the same path as his father, a workingman affiliated with the socialist union UGT. As a member of his railroad section, he takes active part in the revolutionary general strike of August 1917, promoted in conjunction with the anarchosyndicalist Confederacio'n Nacional del Trabajo (CNT); which caused his being expelled from the UGT for being too radical, his persecution by the police and his escape to France, where he comes in contact with exiled anarchists, joining CNT of Asturias upon his return in January 1919.

He joins the open fight against the aggressive employers in the Asturian mines and is arrested for the first time in March 1919; he escapes and by December he is in San Sebastian, an industrial city in the Basque country, with a job as a metal worker. The bourgeoisie was then promoting a wave of assassinations of syndicalists and Durruti joins a self-defense group - Los Justicieros, they plan a sensational hit in reprisal: an attempt on the life of King Alfonso XIII who would be visiting the City in August 1920, but their plan is discovered and they must escape. Durruti continues doing dangerous clandestine work throughout the nation, meeting Francisco Ascaso who would be his fraternal friend and comrade. They travel to Barcelona in August 1922 and form the group Crisol, that would later adopt a name that would be famous in libertarian history: Los Solidarios. This group brought together the most valuable elements of the catalan proletariat, hitting hard against reaction where it hurt the most, until the Spanish political crisis brought the dictatorship of General Primo de Rivera, installed September 1923 with the King's wholehearted support. Proper praise for what Los Solidarios did in courageous defense of the CNT during that hopeless hour has never been given. Hundreds of militants fell and CNT could barely survive and recover thanks to its deep roots among the working class, but the price was high: most of the Solidarios were killed or served long sentences, while Ascaso and Durruti had to seek refuge in Paris.

The failure of the insurrection plans cooked up during exile forces them to travel to Latin America in December 1924, accompanied by Gregorio Jover, in search for funds for the outlawed and persecuted Iberian anarchosyndicalism. Following 15 months of unbelievable adventures including urban guerrilla actions to obtain supplies, unknown in those parts until then, chases and chilling escapes through several countries. The solidary assistance from an endless number of comrades that supported them wherever they went was their infallible resource in outsmarting police persecution.

During quiet times they earn their frugal living as laborers, without ceasing to take part in union work from the grassroots, as the legend grows about these men. In April 1926 they return to Europe and are seduced by an espectacular idea: to kidnap the Spanish King and the dictator when they visit Paris on July 14, but are captured by the police and, after a stormy trial, are expelled from France in July 1927. They keep on living as semiclandestine militants abroad until the fall of Alfonso XIII in April 1931.

Back in Barcelona Durruti is in the midst of a great deal of activity, accompanied by his French companion Emilienne, pregnant with their daughter Colette, who would be born on December 1931. He joins the Iberian Anarchist Federation (FAI), a specifically anarchist organization secretly created in July 1927 - and together with other militants they form the affinity group Nosotros, spokesmen within the CNT of a radical tendency that harbored no illusions with respect to the recently proclaimed Republic, maintaining that the moment was ripe for continued progress. This inner confrontation within the CNT became more bitter until a split occurred, while repression became harsher as well as the government's provocations against these humble workers - whenever they weren't prisoners Durruti and Ascaso worked as mechanics in a mid-sized company in Barcelona - who were seen by the do-gooders as the terrifying fist of the Social Revolution. The repressive hysteria fell upon Durruti and other anarchists in January 1932, being deported to the Canary Islands and the "Spanish" Sahara. Popular pressure resulted in their release in September, but Durruti was immediately arrested for two more months.

Even with the imprisonment of the so-called "leaders", harder positions grew within the CNT and the proletariat, which brought the failed anarchist insurrection of January 1933, after which Durruti must go in hiding until arrested at the end of March. He is out by July, with the CNT and the FAI facing changes in the political scene, as the right wing prepares to assume power after the fiasco of the republicans and socialists, which happens after the November elections. In December there is another failed attempt at a general strike; Durruti and hundreds of anarchists go to prison, but an amnesty lets them out in May 1934, in time for Durruti to play a decisive role in the transport of 13,000 children of Aragon strikers to Barcelona, to be care for by the solidarity of Barcelona's working class families.

In October 1934 the Asturias uprising takes place, 14 days of heroic and unequal combat between the united workers and the army, while the repression and the indecisive behavior of the UGT and other sectors left the anarchists isolated in their effort to spread the revolutionary flame. Once again Durruti suffers months in prison alternating with weeks of feverish public militancy, until the electoral victory by the Popular Front in February 1936, with the crucial vote of CNT members, signaled another turn in the situation. In the midst of an explosive political-social climate, the IV CNT Congress meets in Zaragoza from May 1 to 5, 1936 where an integral part of the debates and the anarchist fervor that permeated the proceedings was due to the Nosotros group, in those days dedicated to workers' readiness for the enormous challenge that was coming. Left and Right were in a collision course, initiated rather soon by the military uprising of July 19 1936.

The CNT and the FAI confronted with courage, organization and mass mobilizations the fascist superiority in weapons and resources; their contribution was decisive in resisting the blow throughout the nation and in Catalunya defeated the rebels singlehandedly, Durruti being one of the boldest fighters in this popular victory and suffering the loss of Francisco Ascaso. On July 24, from Barcelona where libertarian communism was starting to be a reality, Durruti left with an armed column towards Zaragoza, occupied by the rebels. After hard combats that equalitarian militia, without officers or other military trappings advanced and stabilized the Aragon front against regular troops better equipped, even though they could not retake the city.

Parallel to this the anarchist forces supported a social transformation which meant the establishment of agricultural collectives in Aragon, upsetting communists, socialists and other acolites of the creed according to which the war could not be won with the revolution going on. Durruti embodiedthe feelingsand goals of the workers in arms, being a peculiar "chief" whose main privilege was to fight in the first line, his only rank the esteem his equals had for him.

That courageous and shining life - "The short summer of Anarchy" according to his chronist Enzensberger - would come to an end in November of that same year. On the 15 Durruti arrived with a force of 1800 men to reinforce the defense of Madrid, where they went immediately to the toughest section and on the 19 he was struck by a bullet as he walked by a supposedly secure area. He died at dawn on the 20, being buried two days later at Montjuich's cemetery in Barcelona, accompanied by the largest funeral cortege seen in the city.

As with Zamora in Venezuela, el Che in Bolivia or Zapata in Mexico, his death has a stigma of treason and the main suspect, the Stalinist PCE (Communist Party of Spain), would unleash a few months later a brutal persecution of anarchists and other radicals that not only ended the threatening revolution, but was also the beginning of the end of the Republic they claimed to safeguard.

40 years of intense life had this man that fought for his ideals without quarter nor fanaticisms; who never ceased to live of his labor, who acted as much as he read or thought, who loved, dreamed and had close and dear friends. Durruti was who he was, and also the best of what remains in us when we share his luminous trajectory.

From : "Getting to Know Durruti," by Sofia Comuniello, 1992, reprinted by Flag.Blackened.net, http://flag.blackened.net/liberty/durruti-article.html

Pierre Van Paassen interviewing Buenaventura Durruti Madrid, August. 5 (By air to Paris). Durruti, a syndicalist metal-worker, is the man who lead the victorious bayonet-charge of the People’s Militia on the stronghold of the Fascist rebels at San Rafaele yesterday. Durruti was the first in the Hotel Colon in Barcelona, when that building which spewed death for thirty-six hours from two-hundred windows, fell before the onslaught of the well-nigh bare-handed libertarians. When a column is tired and ready to drop with exhaustion, Durruti goes to talk new courage into the men. When things go bad up Saragossa way, Durruti climbs aboard an airplane and drops down in the fields of Aragon to put himself at the head of the Catalonian partisa... (From: TheAnarchistLibrary.org.)

In Valencia's Model Prison where Durruti had been an inmate since that August, CNT and FAI prisoners drawn from Catalonia, Aragon, and Levante proper were in the majority. This homogeneity among the prisoners ensured that the internal affairs of the CNT and the FAI were the especial focus of their discussions. Two years on from the split with the CNT and now that the controversy surrounding it had become less impassioned, the notion of a return to the bosom of the CNT, as advocated by J. Pedro and J. Lopez, was beginning to make some headway; precisely how this return to the fold was to be negotiated, no-one yet knew. All such issues and points were passionately debated in the cells and on the landings of the Model Prison. Durruti who was ... (From: TheAnarchistLibrary.org.)

"For us", said Durruti, "it is a matter of crushing Fascism once and for all. Yes; and in spite of the Government". "No government in the world fights Fascism to the death. When the bourgeoisie sees power slipping from its grasp, it has recourse to Fascism to maintain itself. The Liberal Government of Spain could have rendered the Fascist elements powerless long ago. Instead it compromised and dallied. Even now at this moment, there are men in this Government who want to go easy on the rebels." And here Durruti laughed. "You can never tell, you know, the present Government might yet need these rebellious forces to crush the workers' movement . . ." "We know what we want. To us it means nothing that there is a Soviet Union somewhere in th... (From: TheAnarchistLibrary.org.)

We Anarchists always talk to each other about avoiding hero worship, and then you read about a person like Durruti. No tyrant, no corrupt police officer, no paid-off politician was safe around this man. In his youth, the banks he robbed poured money into Anarchist and labor union resistance movements through Europe and South America. And in his age, he stood and fought at the front lines of the largest Anarchist society ever witnessed by society during the Spanish Civil War. To us mere Anarchists, such a being is almost godlike.