"I worked in a bookshop, took part in the establishment of a group called "Revolutionärer Kampf" (revolutionary fight) and together with Joschka Fischer I was a member of the Frankfurt Sponti-scene which was exercising the social revolution by means of squatting, street fighting, ad agitation in companies such as Hoechst and Opel." 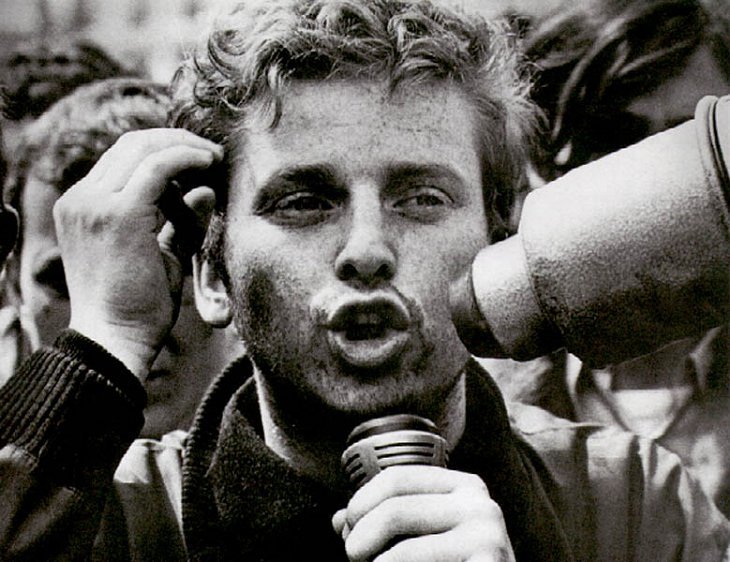 Publicist and politician, the Greens, MEP; co-president of the Greens/Free European Alliance Group in the European Parliament

I was born in Monatuban, France on April 4, 1945. I visited the "Odenwald-Schule" in Oberhambach which I finished with my exam in 1965. When I returned to France immediately after school, supported by a German reparation scholarship, I started my studies in sociology at the University of Nanterre, a suburb of Paris. I became known for being spokesperson and leader of the May-Revolution in Paris during the 60s.

I kept my contacts with my leftist friends in Germany and almost three weeks after the student Benno Ohnesorg was shot in Berlin, I declared on June 13, 1967: "After this first victim in Germany you should not think that the potential for violence is smaller in other countries." In February 1968, I met Rudi Dutschke at the Vietnam-congress in Berlin. After the attempted assassination of Rudi Dutschke, the SDS-chairman Karl Dietrich Wolff accepted my invitation to speak in Nanterre. That was the upbeat of the May- riots in Paris 1968. After the riots, the French government expelled me from France. After 1968, I was active in Frankfurt - among other things also in the "Kinderladen"-Movement. I worked in a bookshop, took part in the establishment of a group called "Revolutionärer Kampf" (revolutionary fight) and together with Joschka Fischer I was a member of the Frankfurt Sponti-scene which was exercising the social revolution by means of squatting, street fighting, ad agitation in companies such as Hoechst and Opel.

The central organ of this scene was the alternative city-magazine "Pflasterstrand". Since 1978 I work as a publicist in Frankfurt. I have been responsible editor and publisher of the magazine "Pflasterstrand". I also belonged to the leading spokespersons, when the so-called "Scene" declared itself for the parliamentary system and supported the party of the GREENS (Die GRÜNEN). After my ban on residence in France was revoked in 1978, I decided to stay in Germany.

In 1984 I became a member of the Green party and there I was one of the most determined opponents of the eco-socialist fundamentalism. As a "Realo-Green" I supported the Minister for environmental affairs of Hessen, Joschka Fischer during his term. After the change of power in Frankfurt in March 1989, the newly-elected red-green coalition under the Lord Mayor Volker Hauff, was a new challenge for me. Hauff called three representatives of the Green Party into his city council and I was given the responsibility of an honorary city councilor for the newly-established office for multi-cultural affairs. During the political debates about restrictions of the constitutional right to seek asylum (1992), I pleaded for a clear immigration law and liberal rights and regulations for citizenship. At the party congress of Bündnis 90/DIE GRÜNEN in November 1993, I was nominated to place 8 only on the party's list for the European elections which were held on June 12, 1994.
(Shortly before, I had advocated in favor of a military intervention to support the Bosnian Muslims. Now, this was what I got for it from the pacifist part of the party.) One of the two mandates for the Germany Greens, who achieved 10.1%, fell onto me. Also during my term as a European Parliamentarian, I remained honorary city councilor in Frankfurt.

From 1994 until 2003 I hosted the show "Literaturclub" for the Swiss TV station DRS.

St. Nazaire, May 18th If you say the students are sons of bourgeois you are right. But a minority of them have made a complete break with their class. They are ready to join up with the workers. Where? In the street, where we can argue and can act. People talk about civil war. But on one side there are the workers, the peasants, the students, on the other the bourgeois. The bourgeois will not fight in the streets. And their police are tied down in Paris. There are not enough of them to go round. The first phase of the advanced struggle we are leading must be the occupation of the factories. Then the setting up of revolutionary councils. We must find new forms of management. We must be masters of the means of production. Equality of wages... (From: TheAnarchistLibrary.org.)