Elizabeth Cady Stanton (November 12, 1815 – October 26, 1902) was an American writer and activist who was a leader of the women's rights movement in the U.S. during the mid- to late-19th century. She was the main force behind the 1848 Seneca Falls Convention, the first convention to be called for the sole purpose of discussing women's rights, and was the primary author of its Declaration of Sentiments. Her demand for women's right to vote generated a controversy at the convention but quickly became a central tenet of the women's movement. She was also active in other social reform activities, especially abolitionism.

In 1851, she met Susan B. Anthony and formed a decades-long partnership that was crucial to the development of the women's rights movement. During the American Civil War, they established the Women's Loyal National League to campaign for the abolition of slavery, and they led it in the largest petition drive in U.S. history up to that time. They started a newspaper called The Revolution in 1868 to work for women's rights.

After the war, Stanton and Anthony were the main organizers of the American Equal Rights Association, which campaigned for equal rights for both African Americans and women, especially the right of suffrage. When the Fifteenth Amendment to the U.S. Constitution was introduced that would provide suffrage for black men only, they opposed it, insisting that suffrage should be extended to all African Americans and all women at the same time. Others in the movement supported the amendment, resulting in a split. During the bitter arguments that led up to the split, Stanton sometimes expressed her ideas in elitist and racially condescending language, for which her old friend Frederick Douglass reproached her.

Stanton became the president of the National Woman Suffrage Association, which she and Anthony created to represent their wing of the movement. When the split was healed more than twenty years later, Stanton became the first president of the united organization, the National American Woman Suffrage Association. This was largely an honorary position; Stanton continued to work on a wide range of women's rights issues despite the organization's increasingly tight focus on women's right to vote. Stanton was the primary author of the first three volumes of the History of Woman Suffrage, a massive effort to record the history of the movement, focusing largely on her wing of it. She was also the primary author of The Woman's Bible, a critical examination of the Bible that is based on the premise that its attitude toward women reflects prejudice from a less civilized age.

Author, lecturer, and chief philosopher of the woman’s rights and suffrage movements, Elizabeth Cady Stanton formulated the agenda for woman’s rights that guided the struggle well into the 20th century.

Born on November 12, 1815 in Johnstown, New York, Stanton was the daughter of Margaret Livingston and Daniel Cady, Johnstown's most prominent citizens. She received her formal education at the Johnstown Academy and at Emma Willard's Troy Female Seminary in New York. Her father was a noted lawyer and state assemblyman and young Elizabeth gained an informal legal education by talking with him and listening in on his conversations with colleagues and guests. 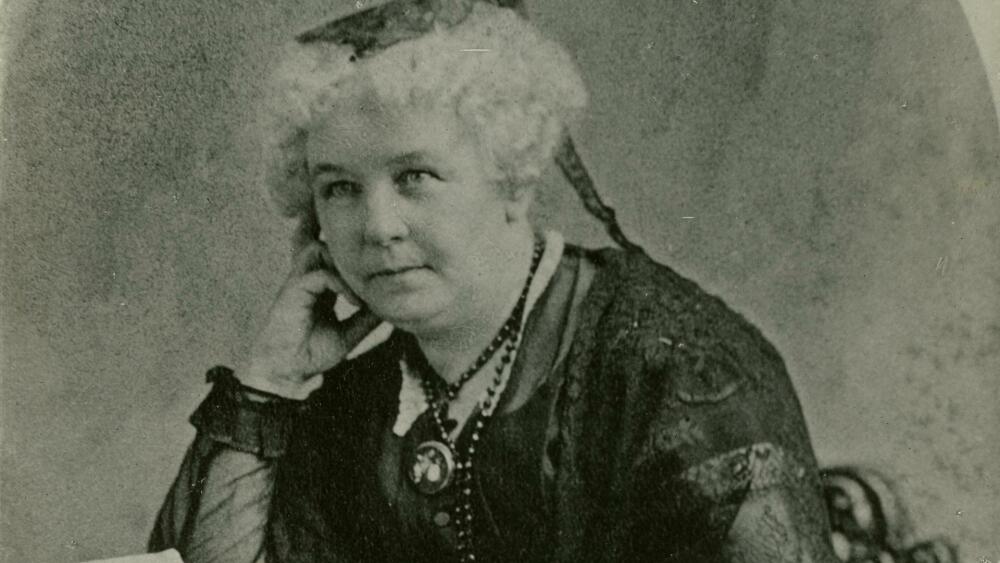 A well-educated woman, Stanton married abolitionist lecturer Henry Stanton in 1840. She, too, became active in the anti-slavery movement and worked alongside leading abolitionists of the day including Sarah and Angelina Grimke and William Lloyd Garrison, all guests at the Stanton home while they lived in Albany, New York and later Boston.

While on her honeymoon in London to attend a World’s Anti-Slavery convention, Stanton met abolitionist Lucretia Mott, who, like her, was also angry about the exclusion of women at the proceedings. Mott and Stanton, now fast friends, vowed to call a woman’s rights convention when they returned home. Eight years later, in 1848, Stanton and Mott held the first Woman’s Rights convention at Seneca Falls, New York. Stanton authored, “The Declaration of Sentiments,” which expanded on the Declaration of Independence by adding the word “woman” or “women” throughout. This pivotal document called for social and legal changes to elevate women’s place in society and listed 18 grievances from the inability to control their wages and property or the difficulty in gaining custody in divorce to the lack of the right to vote. That same year, Stanton circulated petitions throughout New York to urge the New York Congress to pass the New York Married Women’s Property Act.

Although Stanton remained committed to efforts to gain property rights for married women and ending slavery, the women’s suffrage movement increasingly became her top priority. Stanton met Susan B. Anthony in 1851, and the two quickly began collaboration on speeches, articles, and books. Their intellectual and organizational partnership dominated the woman’s movement for over half a century. When Stanton was unable to travel do to the demands of raising her seven children, she would author speeches for Anthony to deliver. 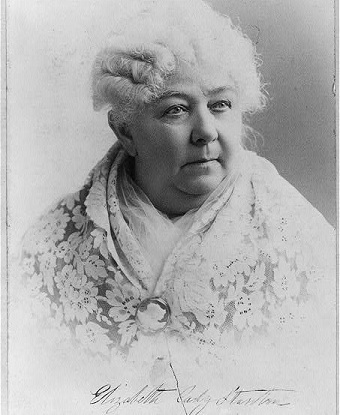 In 1862, the Stantons moved to Brooklyn and later New York City. There she also became involved in Civil War efforts and joined with Anthony to advocate for the 13th Amendment, which ended slavery. An outstanding orator with a sharp mind, Stanton was able to travel more after the Civil War and she became one of the best-known women’s rights activists in the country. Her speeches addressed such topics as maternity, child rearing, divorce law, married women’s property rights, temperance, abolition, and presidential campaigns. She and Anthony opposed the 14th and 15th amendments to the US Constitution, which gave voting rights to black men but did not extend the franchise to women. Their stance led to a rift with other women’s suffragists and prompted Stanton and Anthony to found the National Woman Suffrage Association (NWSA) in 1869. Stanton edited and wrote for NWSA’s journal The Revolution. As NWSA president, Stanton was an outspoken social and political commentator and debated the major political and legal questions of the day. The two major women’s suffrage groups reunited in 1890 as the National American Woman’s Suffrage Association.

By the 1880s, Stanton was 65 years old and focused more on writing rather than traveling and lecturing. She wrote three volumes of the History of Woman Suffrage (1881-85) with Anthony and Matilda Joslyn Gage. In this comprehensive work, published several decades before women won the right to vote, the authors documented the individual and local activism that built and sustained a movement for woman suffrage. Along with numerous articles on the subject of women and religion, Stanton published the Woman's Bible (1895, 1898), in which she voiced her belief in a secular state and urged women to recognize how religious orthodoxy and masculine theology obstructed their chances to achieve self-sovereignty. She also wrote an autobiography, Eighty Years and More, about the great events and work of her life. Stanton died in October 1902 in New York City, 18 years before women gained the right to vote.