...Active in the revolutionary enterprises of 1848-1849 in Lombardy and Rome; Fought with Garibaldi's Thousand in Sicily... 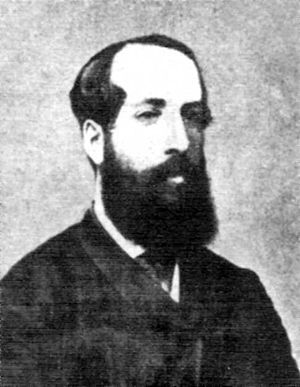 The CNT (National Confederation of Labor) had a long gestation period. Long before it blossomed into a huge anarcho- syndicalist movement, it was experimenting and developing ideas of bringing anarchism and syndicalism together into an overarching people’s social and economic organization, fit to fight off capitalism and forge a new society.

It began in 1868, when the Russian anarchist Michael Bakunin decided to try to help spread the word of the ‘anti-authoritarian’ tendencies in the First International. He paid the fare of his close friend, the Italian anarchist Giuseppe Fanelli who, despite knowing barely a word of Spanish, managed to convince a considerable number of workers and peasants of the value of anarchist ideas. The anarchist Anselmo Lorenzo described the scene thus:

“(Fanelli’s) black expressive eyes...flashed like lightening or took on the appearance of kindly compassion according to the sentiments that dominated him. His voice had a metallic tone and was susceptible to all the inflections appropriate to what he was saying, passing rapidly from accents of anger and menace against tyrants and exploiters to take on those of suffering, regret, and consolation, when he spoke of the pains of the exploited, either as one who without suffering them himself understands them, or as one who through his altruistic feelings delights in presenting an ultra-revolutionary ideal of peace and fraternity. He spoke in French and Italian, but we could understand his expressive mimicry and follow his speech”.

The message spread quickly from Barcelona to Madrid, and within days groups of workers were declaring themselves members of the International. In many ways, the country was ripe. Spain was a country with a poorly developed bourgeois democratic tradition, which gave little opportunity to the ruling classes to co-opt or negotiate with the workers and peasants, as happened in north-west Europe. There was also marked exploitation by landowners and employers that combined with a tradition of collective revolt and skepticism towards political parties. Indeed, the political and social condition of Spanish society at the time was a key-determining factor in the kinds of organizations that formed and the tactics they used to fight back.