Even in the stifling atmosphere of the Kaiser's Germany, however, Karl Diehl stood up to look at the ideology behind the movement, to dispell the untruths spread by the government, and to bring the theories of this important portion of man's political philosophy to the world of academia. 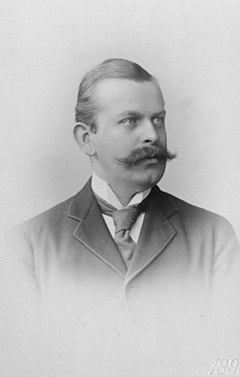 Karl Diehl was a German professor whose career included teaching at the Universities of Heidelberg and Freiberg. His main interests as a political science professor were the radical movements of the 19th and early 20th century. Although he lectured on communism and the sort, he was primarily interested in anarchism and in his lectures and writings related to academia the social philosophy of the anarchists which have formed the basis for anarchist movements around the world.

Although his additions to the field of anarchist theory may seem minimal, it must be remembered that he was among very few academicians who voiced support for the radical left and disregarded the propaganda of the nations which kept political philosophies such as anarchism under severe and brutal repression as violent fringe radicals. In a series of essays contained in the book Anarchismus, Sozialismus, und Kommunismus, Diehl not only looked at each individual philosophy, which, to him, were blurred to much in popular perception to allow the public to truly weigh the merits of each political philosophy on their own. Diehl also strove to dispell the "Propaganda of the deed", or the state-sponsored presentation of Anarchist movements as being fundamentally violent by linking their philosophy to terrorist acts instead of to the political theory associated with the actual Anarchists.

It may be true that those who act, such as Kropotkin, seem to add more to a movement than those who merely present it to the people. However, the successes of the Anarchists in actuality have always been marginalized by the academics and the press who relegate them to the status of mere violent thugs, without mores or ideology. Even in the stifling atmosphere of the Kaiser's Germany, however, Karl Diehl stood up to look at the ideology behind the movement, to dispell the untruths spread by the government, and to bring the theories of this important portion of man's political philosophy to the world of academia. Through these actions, he truly shines, not as brightly as do people like Godwin or Goldman, but with the constancy of all of those who seek to struggle against injustice.

Theory of Anarchism, The

This essay is contained in the book Anarchismus, Kommunismus, und Sozialismus (Anarchism, Communism, and Socialism) by Karl Diehl. Essay Six: The Theory of Anarchism Anarchism The Theory of Anarchism Why is it that in times of late Anarchy suits me so well? Each lives in pursuit of his wishes, That is also my goal. I leave to each his endeavors, In order that I might be able to pursue mine. In these verses, Goethe has characterized the essence of the anarchist movement in a strikingly accurate manner. Anarchism intends to create a society in which there is the greatest possible human freedom. To begin with, two sorts of prevalent errors regarding the means and intents of the anarchists must be dispelled. The anarchist moveme... (From: Anarchy Archives.)
anarchist movement
social-philosophical system
propagandized
self
groups
moral
egoists
capital
philosophers
history