Michel was a schoolteacher and active in the Paris Commune and the French Revolution of the 1870s -- both in looking after the wounded and fighting. She was transported to New Caledonia, but returned to France after the Communards were granted amnesty. She was much admired among the worker's movement. 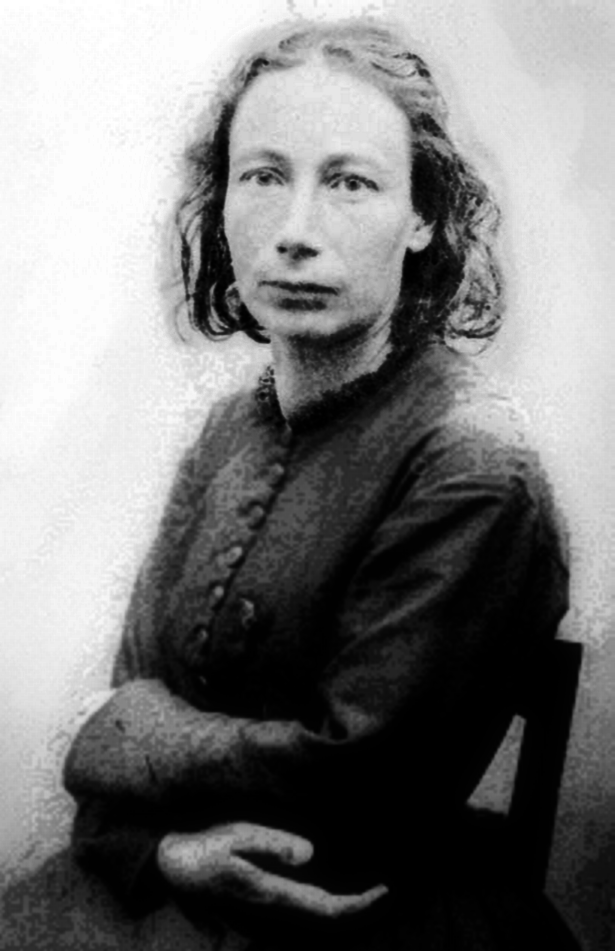 Michel was a schoolteacher and active in the Paris Commune and the French Revolution of the 1870s -- both in looking after the wounded and fighting. She was transported to New Caledonia, but returned to France after the Communards were granted amnesty. She was much admired among the worker's movement.

Cite from Encyclopedia Universalis: Louise Michel was the daughter of a noble man and his servant; she grew up in the castle of her grandparents and got a liberal/progressive and good education (in the spirit of Voltaire) and became a schoolmaster. She refused to take an oath of allegiance to the emperor and opened a private school. She wrote poems and opposition journals; she frequented public meetings. In 1870 she took part with the French Commune on the barricades as an ambulance woman, and lead a revolution club. At the fall of the Commune she was deported(1871). Victor Hugo wrote a famous poem in her honor: "Viro Major."

She arrived in New Caledonia in 1873, where she tried to educate Canacs and support their revolt against colonization. After amnesty was granted, she returned to Paris in 1880. Capitalist newspapers gave her the name of "the red virgin" and depicted her in caricatures and words as ugly and masculine. She drew huge crowds in the meetings for the worker's movement, and was a tireless militant who held many conferences in France, England, Belgium and the Netherlands.

In 1881 she took part in the anarchist congress in London. After a demonstration against unemployment, she was sentenced to six years in jail, then pardoned. From 1881 to 1895 she lived in London, as head of a libertarian school. She returned to France and her travels, dying in Marseilles. Her burial was the occasion of a large demonstration.

Declaration to the Tribunal of Lyons by ...

We are going to say what anarchy is, what anarchists are. The anarchists, messieurs, are citizens who, in a century where freedom of opinion is preached everywhere, believe it to be their obligation to call for unlimited freedom. Yes messieurs, throughout the world we are a few thousand, a few million workers who demand absolute freedom, nothing but freedom, all of freedom! We want freedom, which is to say that we demand the right and the means for all human beings to do whatever pleases them, to fully satisfy all their needs, without any limit but that imposed by their natural possibilities and the needs of their neighbors, which are equally worthy of respect. We want freedom, and we believe its existence is inc... (From: TheAnarchistLibrary.org.)

In Defense of the Commune

I do not wish to defend myself, I do not wish to be defended. I belong completely to the social revolution, and I declare that I accept complete responsibility for all my actions. I accept it completely and without reservations. You accuse me of having taken part in the murder of the generals? To that I would reply Yes, if I had been in Montmartre when they wished to have the people fired on. I would not have hesitated to fire myself on those who gave such orders. But I do not understand why they were shot when they were prisoners, and I look on this action as arrant cowardice. As for the burning of Paris, yes, I took part in it. I wished to oppose the invader from Versailles with a barrier of flames. I had no accomplices in t... (From: TheAnarchistLibrary.org.)

Memories of the Commune

I at first wrote this volume without telling anything about myself. When friends pointed this out I added a few personal episodes despite the ennui it caused me. As I did so the opposite effect was produced: as I advanced in the tale I came to love reliving this time of struggle for freedom, which was my true existence, and I love losing myself in the memory of this. This is why I look upon my thoughts as a series of tableaux where pass thousands of existences that have disappeared forever. There we are on the Champs de Mars: our arms are stacked and the night is beautiful. At about 3:00 a.m. we leave, thinking we are going to Versailles. I speak with old Louis Moreau, and he too is happy to be setting out. In place of my old ... (From: TheAnarchistLibrary.org.)

Chapter 7. The Decaying Empire The city of Paris condemned our school building on the rue du Chateau- d’Eau. Mme Vollier hoped in vain that after its demolition we would get an indemnity which would let us establish a day school in the suburbs. Julie had received a small sum from her family, and she struck out on her own. Relinquishing her share in the partnership to us, she bought a day school in faubourg St. Antoine; I chose not to go with her, but on holidays we got together, and on Thursday evenings I gave music lessons at her school. My mother sold all her remaining land except the vineyard to give me enough money to buy a day school in Montmartre. The poor woman, how little she got back for that money, and what sacrifices sh... (From: TheAnarchistLibrary.org.)

Everything is good that strikes or stings. So much the better if these bandits have finished their work. The scaffold has started the party, and the fire will beat its wings over the apotheosis. The blood of Ravachol splashes, from his false collar to his cuffs, the cold man of the Élysée. The Élysée! That’s the spot that draws the looks! From it the grand finale, the final bouquet will rise into the air, and the cross of Our Lady of the Slaughter will be the streetlamp. The sun has risen red in the prologue, and red it will set. Yes, so much the better. It is necessary that this be finished, that we plow these accursed institutions like a field, in order to dry up the blo...

Why I Am an Anarchist

I am an Anarchist because Anarchy alone, by means of liberty and justice based on equal rights, will make humanity happy, and because Anarchy is the sublimest idea conceivable by man. It is, today, the summit of human wisdom, awaiting discoveries of undreamed of progress on new horizons, as ages roll on and succeed each other in an ever widening circle. Man will only be conscious when he is free. Anarchy will therefore be the complete separation between the human flocks, composed of slaves and tyrants, as they exist to day, and the free humanity of tomorrow. As soon as man, whoever he may be, comes to power, he suffers its fatal influence and is corrupted; he uses force to defend his person. He is the State; and he considers it a pro... (From: TheAnarchistLibrary.org.)

Why we are Anarchists

We are Anarchists because it is absolutely impossible to obtain justice for all in any other way than by destroying institutions founded on force and privilege. We cannot believe that improvement is possible, if we still keep up the same institutions, now more rotten than in the past, or if we merely replace those whose iniquities are known by new men. These latter become in their turn what the others were, or else become barren. After the gradual changes of past centuries the hour has come when evolution cannot be separated from revolution, as in all birth they must be accomplished together. You can no more retard the birth of a system than you can that of living being. In what would you that we should help thos... (From: TheAnarchistLibrary.org.)