As the movement became the Movement and shifted to a struggle between the Old Left and the New Left, Goodman remained unapologetically free. Many of his former followers abandoned him as he refused to offer a blueprint for building structures for the future, preferring the formulation of here, now, next. 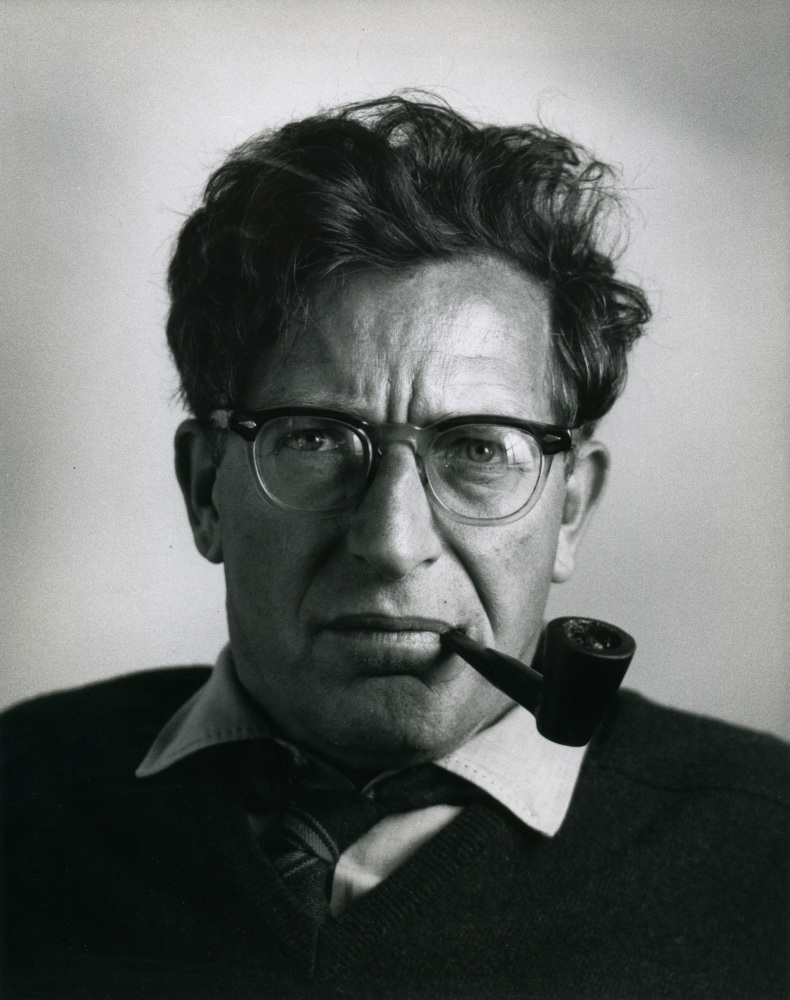 Paul Goodman was born in New York City on September 9, 1911. He never knew his father who abandoned the family when Paul was an infant. This left his bohemian mother a working single parent. His brother Percival left home early. He was raised without much supervision by his mother's sisters and his older sister Alice in the rich atmosphere of the urban Jewish intellectual community of the early part of the century. He was a bookish and curious child who roamed freely in the streets, parks, museums and libraries of New York City absorbing a truly free education. He graduated from City College in the depression year of 1931 and sneaked into classes at Columbia and Harvard. Through a Columbia professor he was invited to teach at the University of Chicago while he earned his Ph.D in Literature, but he was fired from his job (as he was fired from every teaching job in his life) because he insisted on his right to fall in love with his students. He was never in the closet about his bisexuality and saw no reason to hide it even in the face of the trouble it caused him in that less permissive time.

Through the next twenty-five years he lived with his common-law wife Sally. Goodman had two daughters, Susan (whose mother was Virginia Miller, Goodman's first wife) and Daisy, and a son, Matthew Ready. During this time they lived in decent poverty and an ideal environment for serious people. They got by on little jobs including a $5 per story contract with the MGM story department in New York for plot synopses of French novels. During this time he wrote furiously. He considered himself an artist and produced mostly poems, plays and short stories. He promoted himself vigorously but met with little acceptance of his mostly avant-garde style. He was involved with little literary magazines, theater groups and political activities centered around the Spanish Anarchist Hall (Solidaridad International Anti-Fascista).

Midlife found Paul Goodman drained and fearful in the face of his status as a marginal artist with children to raise. He wrote in a journal: I am at a loss, in our great city, how to do anything at all that could make an immediate difference in our feeling and practice (and so in my own feeling and practice). Therefore I have ceased to want anything, I do not know what we want. It was at this time that he met Fritz Perls, a German Jew who spent the Hitler years in South Africa and fled to the United States as the apartheid regime arose there. Perls had studied with the founding generation of Freudians but soon developed a very unconventional therapeutic practice. Perls' ideas blended well with Goodman's and they were soon involved in a rich collaboration, founding the Gestalt Therapy Institute and writing Gestalt Therapy.

This exposure shifted Goodmanâs career from artist/writer to social critic. He wrote no more stories or plays and fewer poems. His breakthrough book, Growing Up Absurd, was rejected by a dozen publishers before finally seeing print in 1960 and becoming a huge success. Soon the rest of society began to catch up to him as young people began to rebel against the excessive conventionality of the fifties. He was well placed to address the anti-institutional critique which emerged at this time and led to massive change in the years to come. By the mid-sixties he was adopted as sort of an uncle of the youth/student movement, wrote a book a year, and made almost constant campus appearances. His contribution was scholarly yet personal, classical yet revolutionary, and thoroughly natural and anti-institutional.

As the movement became the Movement and shifted to a struggle between the Old Left and the New Left, Goodman remained unapologetically free. Many of his former followers abandoned him as he refused to offer a blueprint for building structures for the future, preferring the formulation of here, now, next. He seemed both saddened and relieved by this and soon settled into his familiar status as outsider critic, but now with a comfortable fame and some financial security.

In 1967 his son Mathew died tragically in a mountain climbing accident. Friends say he never recovered from the grief this caused him. Soon his health began to deteriorate and his writing mellowed into the reflections of an old warrior. He died of a heart attack on August 2, 1972, just short of his sixty-first birthday.

From : Paul Goodman Biography, by John Fitzgerald, from Anarchy Archives

We propose banning private cars from Manhattan Island. Permitted motor vehicles would be busses, small taxis, vehicles for essential services (doctor, police, sanitation, vans, etc.), and the trucking used in light industry. Present congestion and parking are unworkable, and other proposed solutions are uneconomic, disruptive, unhealthy, nonurban, or impractical. It is hardly necessary to prove that the actual situation is intolerable. “Motor trucks average less than six miles per hour in traffic, as against eleven miles per hour for horse drawn vehicles in 1911.” “During the ban on nonessential vehicles during the heavy snowstorm of February 1961, air pollution dropped 66 percent.” (New York Times, March 13, 1961.) Th... (From: bopsecrets.org.)
1961
diversifying
trucks
subway
police
improvement
prohibitive
community
work
radical

Black Flag Of Anarchism, The

Anarchism is grounded in a rather definite proposition: that valuable behavior occurs only by the free and direct response of individuals or voluntary groups to the conditions presented by the historical environment. It claims that in most human affairs, whether political, economic, military, religious, moral, pedagogic, or cultural, more harm than good results from coercion, top-down direction, central authority, bureaucracy, jails, conscription, states, preordained standardization, excessive planning, etc. Anarchists want to increase intrinsic functioning and diminish extrinsic power. This is a social-psychological hypothesis with obvious political implications. Depending on varying historical conditions that present various threats to t... (From: The Stan Iverson Memorial Library, Infoshop & Arch....)
human
patents
capitalism
freedoms
speaking
violence
free enterprise
bill
authority
past

Children and Psychology, The

What is most significant, it seems to me, is the earnest attention paid to the Children and Family as a subject, the desire of parents to be Informed and thereby do their best, rather than following their wit and impulse; or to say this another way, what is significant is the importance assigned in our society to Psychology itself? for Psychology is still by and large the family-psychology that Freud made it discussing the problems of jealousy, infantile dependency authority, submissiveness and rebelliousness, and sibling competition: and problems of spite, moral prejudice and other reaction-formations springing from instinctual deprivation. This interest in the Children is of course hopeful, for the increase of wisdom cannot fail to remedy... (From: http://www.tao.ca/~freedom/goodman.html.)
exploration and inspiration
money
tyrannised
safety
submissiveness
inspiration
models
objective
elementary
heirs

I am asked for my thoughts about the content and style of anti-war films, and how to make such a film. First of all, such a film must at least not do positive harm by predisposing its audience toward war. The images of senseless violence, horror, and waste that are usually employed in the commercially successful “antiwar” films do have a titillating effect and remain in the soul as excitants and further incitements. Let me show how this works. (1) In cinematic conditions of bright screen and dark theater, lasting for many minutes and tending to fascination and hypnosis, images of horror easily detach themselves from the kind of intellectual and ethical framework in which they are usually presented, and they attach themselves to ... (From: http://www.bopsecrets.org/CF/goodman.htm.)
ideas
masochism
sexuality
wishes
self-disapproval
violence
men
propaganda
armies
state

Growing Up Absurd : Problems of Youth in the Organ...

I. Jobs 1. It’s hard to grow up when there isn’t enough man’s work. There is “nearly full employment” (with highly significant exceptions), but there get to be fewer jobs that are necessary or unquestionably useful; that require energy and draw on some of one’s best capacities; and that can be done keeping one’s honor and dignity. In explaining the widespread troubles of adolescents and young men, this simple objective factor is not much mentioned. Let us here insist on it. By “man’s work” I mean a very simple idea, so simple that it is clearer to ingenuous boys than to most adults. To produce necessary food and shelter is man’s work. During most of economic history mo... (From: TheAnarchistLibrary.org.)

Reflections on the Anarchist Principle

Anarchism is grounded in a rather definite proposition: that valuable behavior occurs only by the free and direct response of individuals or voluntary groups to the conditions presented by the historical environment. It claims that in most human affairs, whether political, economic, military, religious, moral, pedagogic, or cultural, more harm than good results from coercion, top-down direction, central authority, bureaucracy, jails, conscription, States, preordained standardization, excessive planning, etc. Anarchists want to increase intrinsic functioning and diminish extrinsic power. This is a social-psychological hypothesis with obvious political implications. Depending on varying historical conditions that present various threats to th... (From: TheAnarchistLibrary.org.)

Some Remarks on War Spirit

In a disturbing study of the paralyzing effects of war spirit and war preparations, “The Arms Race as an Aspect of Popular Culture,” Professor Robert Engler of Columbia warns us of the dislocation of scientific and professional education; the dislocation of the normal pattern of economy and industry; the growing spirit of the garrison state: censorship, lying propaganda, the infiltration of the (retired) military into the industrial system; the crazy competitive goals in armaments and the space race; the astonishing distortion of community values in the private-shelter business. People accept the whittling away of civil liberties. There is distortion even in the play and dreams of children. We must ask also the opposite questio... (From: TheAnarchistLibrary.org.)

From : "The Children and Psychology," by Paul Goodman