As anarchism's most important philosophers he was in great demand as a writer and contributed to the journals edited by Benjamin Tucker (Liberty), Albert Parsons (Alarm) and Johann Most (Freiheit). Tucker praised Kropotkin's publication as "the most scholarly anarchist journal in existence."

From : "Anarchism," by Peter Kropotkin, from the Encyclopedia Britannica, 1910 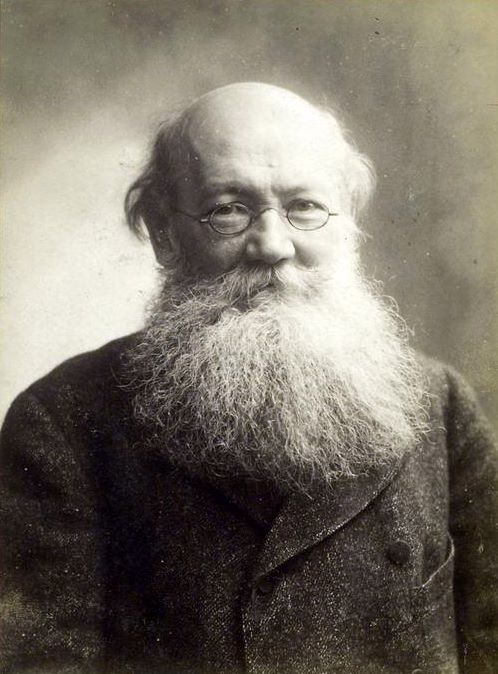 Prince Pyotr Alexeyevich Kropotkin (/kroʊˈpɒtkɪn, krə-/;[10] Russian: Пётр Алексе́евич Кропо́ткин; December 9, 1842 – February 8, 1921) was a Russian activist, scientist, and philosopher, who advocated anarchism. Kropotkin was a proponent of a decentralized communist society free from central government and based on voluntary associations of self-governing communities and worker-run enterprises. He wrote many books, pamphlets and articles, the most prominent being The Conquest of Bread and Fields, Factories and Workshops, and his principal scientific offering, Mutual Aid: A Factor of Evolution. He also contributed the article on anarchism to the Encyclopædia Britannica Eleventh Edition, and left unfinished a work on anarchist ethical philosophy.

From : "Anarchism," by Peter Kropotkin, from the Encyclopedia Britannica, 1910

From : "The Commune of Paris," by Peter Kropotkin, Freedom Pamphlets, no. 2

From : "Process Under Socialism," by Peter Kropotkin, 1887

From : "Revolutionary Government," by Peter Kropotkin, 1880

From : "The Spirit of Revolution," by Peter Kropotkin, first appearing in Le Révolté in 1880

Kropotkin was a master, a genius. His vision of an Anarchist world may not have been the first, but it was the brightest. And unlike past utopian dreamers, his vision became an authentic reality.