Randolph Bourne, who was to die in the flu epidemic shortly after the Armistice, cried out alone against the betrayal of the values of civilization by his fellow writers. 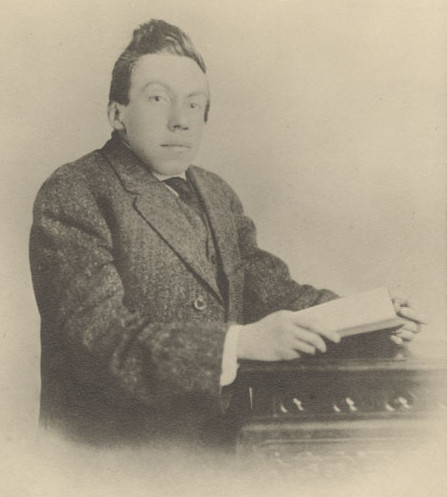 On December 19, a brilliant and impoverished young writer, formerly a frequent contributor to The New Republic but then bitterly at odds with it, was bothered by a cold, and moved into the apartment of the woman he was soon to marry, on the third floor of 18 West 8th Street, New York. Three days later, gasping for breath, balking at the oxygen, he asked for an eggnog. When it was brought to him, he deliberately praised its pale yellow color; and a few minutes later he died. Not all that many years ago, if one had told that story in any reasonably literate circle, everyone would have known who it was. Randolph Bourne, dead at 32.

The bare facts of his life, although remarkable, may be given quickly. He was born in 1886. It was, as he said, "a terribly messy birth." His face was badly deformed by a bungled forceps delivery. The umbilical cord was coiled round his left ear, leaving it permanently damaged and misshapen. As if this were not enough, he contracted spinal tuberculosis at the age of four, which dwarfed him, and made him look like a "grotesque hunchback." Ellery Sedgwick, then the editor of The Atlantic Monthly, said of their first meeting in 1911 that in appearance Bourne was "without a redeeming feature," and that "I could not bring myself to ask him to stay to lunch." Writing to Mary Messer in 1913, Bourne described himself as a man

cruelly blasted by the powers that brought him into the world, in a way that makes him both impossible to be desired and yet--cruel irony that wise Montaigne knew about--doubly endowed with desire.

Due to the improvidence and, it seems, the indifference of his father, he had to make his own way to the university, and he did not go to Columbia until, at the age of twenty-three, he received a scholarship. His academic performance was so good that he graduated a year early, and Columbia then awarded him the Gilder Fellowship for a year's travel in Europe. He had already made something of a name for himself, as a writer and as a spokesman of his generation, by his numerous contributions to The Atlantic. When he returned from Europe--he was there when the war began--The New Republic was just beginning. It was to be his main source of income for the next two-and-a-half years--he wrote seventy-five essays for it in that time--until he broke sharply with it on the issue of America's entry into the war. From 1916 until his death two years later, he also contributed thirty-two essays to The Dial; and during its brief life, seven important essays to Seven Arts. Given the range and length, quality and substance, of most of the pieces, it was an astonishing performance--in only four years.