Anarchy and Organization: A Letter to the Left

Father of Social Ecology and Anarcho-Communalism

: Growing up in the era of traditional proletarian socialism, with its working-class insurrections and struggles against classical fascism, as an adult he helped start the ecology movement, embraced the feminist movement as antihierarchical, and developed his own democratic, communalist politics. (From: Anarchy Archives.)
• "Or will ecology groups and the Greens turn the entire ecology movement into a starry-eyed religion decorated by gods, goddesses, woodsprites, and organized around sedating rituals that reduce militant activist groups to self-indulgent encounter groups?" (From: "The Crisis in the Ecology Movement," by Murray Bo....)
• "...Proudhon here appears as a supporter of direct democracy and assembly self- management on a clearly civic level, a form of social organization well worth fighting for in an era of centralization and oligarchy." (From: "The Ghost of Anarcho-Syndicalism," by Murray Book....)
• "The historic opposition of anarchists to oppression of all kinds, be it that of serfs, peasants, craftspeople, or workers, inevitably led them to oppose exploitation in the newly emerging factory system as well. Much earlier than we are often led to imagine, syndicalism- - essentially a rather inchoate but radical form of trade unionism- - became a vehicle by which many anarchists reached out to the industrial working class of the 1830s and 1840s." (From: "The Ghost of Anarcho-Syndicalism," by Murray Book....)

Anarchy and Organization: A Letter to the Left

Anarchy and Organization appears in Anarchy Archives with the permission of the author.
The essay originally was written in reply to an attack by Huey Newton on anarchist forms of organization.

ANARCHY AND ORGANIZATION
A Letter To The Left 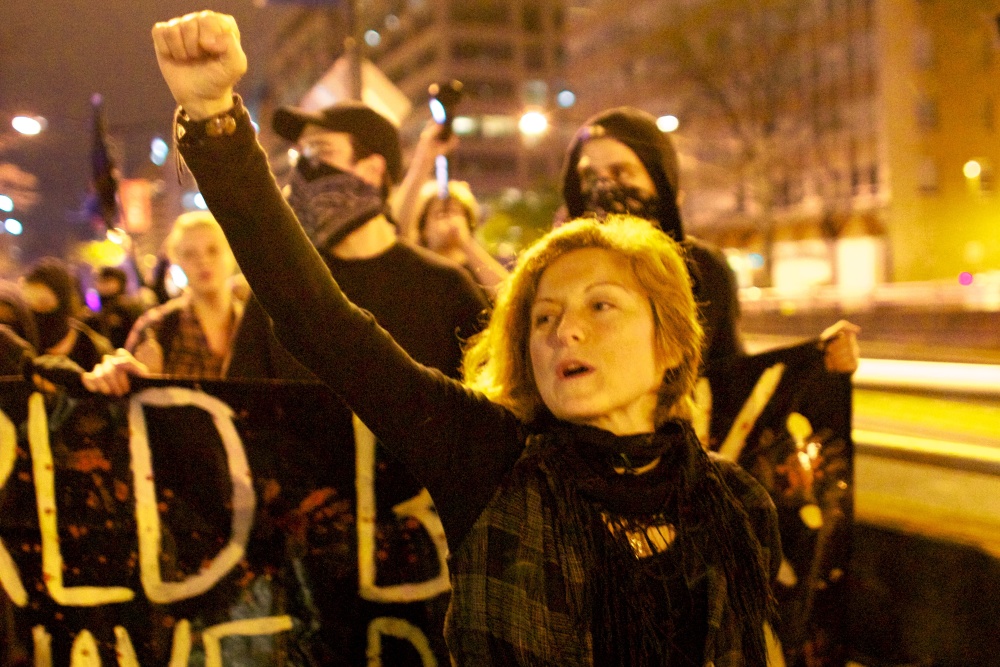 There is a hoary myth that anarchists do not believe in organization to promote revolutionary activity. This myth was raised from its resting place by Marcuse in a L'Express interview some months ago and reiterated again by Huey Newton in his "In Defense of Self-Defense," which New Left Notes decided to reprint in the recent National Convention issue.

To argue the question of "organization" versus "non-organization" is ridiculous; this issue has never been in dispute among serious anarchists, except perhaps for those lonely "individualists" whose ideology is rooted more in an extreme variant of classical liberalism than anarchy. Yes, anarchists believe in organization - in national organization and international organization. Anarchist organization have ranged from loose, highly decentralized groups to "vanguard" movements of many thousands, like the Spanish FAI, which functioned in a highly concerted fashion.

The real question at issue is not organization versus non-organization, but rather, what kind of organization. What different kinds of anarchist organizations have in common is that they are developed organically from below, not engineered into existence from above. They are social movements, combining a creative revolutionary life-style with a creative revolutionary theory, not political parties, whose node of life is indistinguishable from the surrounding rounding bourgeois environment and whose ideology is reduced to rigid "tried-and-tested programs." They try to reflect as much as is humanly possible the liberated society they seek to achieve, not slavishly duplicate the prevailing system of hierarchy, class, and authority. They are built around intimate groups of brothers and sisters, whose ability to act in common is based on initiative, convictions freely arrived at, and deep personal involvement, not a bureaucratic apparatus, fleshed out by docile memberships and manipulated from the top by a handful of all-knowing "leaders."

I don't know who Huey is arguing with when he speaks of "anarchists" who believe all they have to do is "just express themselves individually" in order to achieve freedom. Tim Leary? Allen Ginzberg? The Beatles? Certainly not the revolutionary anarchist communists I know -- and I know a large and fairly representative number. Nor is it clear to me where Huey acquired his facts on the May-June revolt in France. The "Communist party and the other progressive parties" of the French "Left" hadn't merely "lagged behind the people," as Huey seems to believe; these "disciplined" and "centralized" organizations tried in every way to obstruct the revolution and re-direct it back into traditional parliamentary channels. Even the "disciplined," "centralized" Trotskyist FER and the Maoist groups opposed the revolutionary students as "ultra-leftists," "adventurists," and "romantics" right up to the first street fighting in May. Characteristically, most of the "disciplined," "centralized" organizations of the French "Left" either lagged outrageously behind the events of, in the case of the "Communist Party and progressive parties," shamelessly betrayed the students and workers to the system.

I find it curious that while Huey accuses the French Stalinist hacks of merely having "lagged behind the people" he holds the anarchists and Danny Cohn-Bendit responsible for the people being "forced to turn back to DeGaulle." I visited France shortly after the May-June revolt and I can substantiate with out the least difficulty how resolutely Danny Cohn Bendit, the March 22nd Movement, and the anarchists tried to develop the assembly forms and action committees into a "structural program" (indeed, it went far beyond mere "program") to replace the DeGaulle government. I could show quite clearly how they tried to get the workers to retain their hold on the factories and establish direct economic contacts with the peasants: in short, how they tried to replace the French political and economic structure by creative, viable revolutionary forms. In this, they met with continual obstruction from the "disciplined" "centralized" parties of the French "Left" including a number of Trotskyist and Maoist sects.

There is another myth that needs to be exploded -- the myth that social revolutions are made by tightly disciplined cadres, guided by a highly centralized leadership. All the great social revolutions are the work of deep-seated historic forces and contradictions to which the revolutionary and his organization contributes very little and, in most cases, completely misjudges, The revolutions themselves break out spontaneously. The "glorious party" usually lags behind these events -- and, if the uprising is successful, steps in to commandeer, manipulate, and almost invariably distort it. It is then that the revolution reaches its real period of crises: will the "glorious party" re-create another system of hierarchy, commination and power in its sacred mission to "protect the revolution," or will it be dissolved into the revolution together with the dissolution of hierarchy, domination and power as such? If a revolutionary organization is not structured to dissolve into the popular forms created by the revolution once its function as a catalyst is completed; it its own forms are not similar to the libertarian society it seeks to create, so that it can disappear into the revolutionary forms of the future -- then the organization becomes a vehicle for carrying the forms of the past into the revolution. It becomes a self perpetuating organism, a state machine that, far from "withering away", perpetuates all the archaic conditions for its own existence.

There is far more myth than reality to the claim that a tightly "centralized" and "disciplined" party promotes the success of a revolution. The Bolsheviks were split, divided, and riddled by factional strife from October, 1917 to March, 1921. Ironically, it was only after the last White armies had been expelled from Russia that Lenin managed to completely centralize and discipline his party. Far more real have been the endless betrayals engineered by the hierarchical, "disciplined," highly "centralized" parties of the "Left," such as the Social Democratic and Communist.

They followed almost inexorably from the fact that every organization (however revolutionary its rhetoric and however well-intentioned its goals) which models itself structurally on the very system it seeks to overthrow becomes assimilated and subverted by bourgeois relations. It's seeming effectiveness becomes the source of its greatest failures.

Undeniably problems arise which can be solved only by committees, by coordination, and by a high measure of self-discipline. To the anarchist, committees must be limited to the practical tasks that necessitate their existence, and they must disappear once their functions are completed. Coordination and self-discipline must be achieved voluntarily, by virtue of the high moral and intellectual caliber of the revolutionary. To seek less that this is to accept, as a "revolutionary," a mindless robot, a creature of authoritarian training, a manipulable agent whose personality and outlook are utterly alien, indeed antithetical, to any society that could be remotely regarded as free.

No serious anarchist will disagree with Huey's plea on the "necessity for wiping out the imperialist structure by organized groups." If at all possible we must work together. We must recognize too, that in the United States, the heartland of world lmperialism today, an economy and technology has been developed which could remove, almost overnight, all the problems that Marx once believed justified the need for a state. It would be a disastrous error to deal with an economy of potential abundance and cybernated production from a theoretical position which was still rooted in a technological era based on coal, crude machines, long hours of toil, and material scarcity. It is time we stop trying to learn from Mao's China and Castro's Cuba -- and see the remarkable economic reality under our very eyes for all men to enjoy once the American bourgeois colossus can be tumbled and its resources brought to the service of humanity.

January 15, 1969
Anarchy and Organization: A Letter to the Left — Publication.

Image Gallery of Anarchy and Organization: A Letter to the Left