: In addition to defending the rights of African-Americans, Lucy spoke out against the repressed status of women in nineteenth century America. Wanting to challenge the notion that women could not be revolutionary, she took a very active, and often militant, role in the labor movement... (From: IWW.org.)
• "...we are willing to work for peace at any price, except at the price of liberty." (From: "The Principles of Anarchism," by Lucy E. Parsons.)
• "I learned by close study that it made no difference what fair promises a political party, out of power might make to the people in order to secure their confidence, when once securely established in control of the affairs of society that they were after all but human with all the human attributes of the politician." (From: "The Principles of Anarchism," by Lucy E. Parsons.)
• "...concentrated power can be always wielded in the interest of the few and at the expense of the many." (From: "The Principles of Anarchism," by Lucy E. Parsons.) 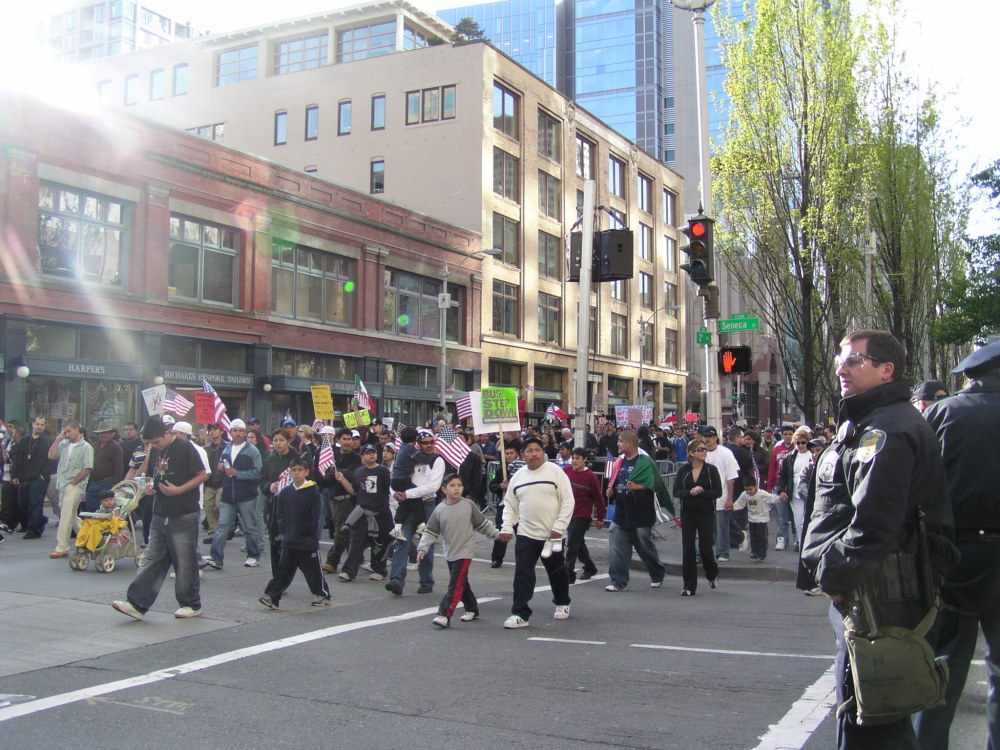 The Industrial Workers of the World is the last child born of the great surging struggle in the world’s arena between labor and capital. It is a child vigorous and aggressive, gaining in strength, expanding in power, and commanding attention and respect. This young child is the progeny of a long line of the Earth’s stalwarts who have engaged in the onward march towards a better world.

The IWW is urging the workers to set aside the first of May, 1912 to demand of the master class an eight-hour working day. Of course if the working class are not sufficiently awake to their own interests to come out and stand like men for this very just and modest demand, the IWW will not abandon the agitation; on the contrary, it may agitate for a still shorter work day, so as to keep pace, to some extent at least, with the advance in labor-saving (labor-destroying) machinery. A reduction of the working time is the most just and practical palliative that can be injected into the issue between labor and capital. In fact, while it seems to be a palliative on the face of it, it is in reality not a palliative at all, but a revolutionary measure, because time is the greatest factor in our existence.

It has taken eons of time to develop every particle of matter in the universe, man included, yet time to man is so short and precious. There is so little that he can accomplish between the time that his mother implants her first mother-love kiss upon his newborn cheek to when death has clasped him in its cold embrace. If he has run his two- or three-score years between the cradle and the grave, and has occupied every moment of that time to the very best advantage possible, he has accomplished very little indeed.

It would be well if the working class would heed the call of the IWW and cease to labor on the first day of May and take stock of themselves and try to realize what space of time elapses from the time they offer their labor to the boss, at about fifteen years—in other words, when they place their capital on the market, “capital” which consists of stored-up power in their muscles and brains—to their forty-fifth or fiftieth year, when the best there was in them has been used up by the boss and they are flung out upon the human scrap-heap as useless material, with nothing more to be ground out of them for the benefit of the boss.

I say it will be well for them to stop for one day at least, and take stock of their stock—that is of themselves, and see if it is worth while for them to spend three-fourths of their time toiling for a bare existence: not for a living, for the vast majority of them do not live, they barely exist. If they should stop to think they would soon better their condition.

The first great strike of America for a reduction of hours of labor to eight per day occurred on May First, 1886. In October 1885, a convention of labor organizations was held in Chicago; at said convention a resolution was passed, requesting the working class to set aside the First of May, 1886, to demand a reduction of the hours of the workers to eight. The Knights of Labor was not represented at the above mentioned convention and did not participate in the strike as a national organization, but many of the [Knights’] “Assemblies” did so. The radical element in Chicago were divided as to what position they should take regarding the proposed strike, some taking the position that it was only a palliative at best, that it was not worth such a gigantic struggle as must be engaged in, if it was to succeed.

Following is part of an interview by Albert R. Parsons printed in the Chicago Daily News, March 13, 1886:

The movement to reduce the work-hours is intended by its projectors to give a peaceful solution to the difficulties between the capitalists and laborers. I have always held that there were two ways to settle this trouble, either by peaceable means or violent methods. Reduced hours, or eight-hours, is the peace-offering. Fewer hours mean more pay. Reduced hours is the only measure of economic reform which consults the interests of the laborers as consumers. Now, this means a higher standard of living for the producers, which can only be acquired by possessing and consuming a larger share of their own product. This would diminish the profits of the labor exploiters.

The Central Labor Union of Chicago, consisting of 25,000 German trades unionists, passed a resolution, requesting August Spies, editor of the Arbeiter-Zeitung (German daily), and Albert R. Parsons, editor of The Alarm (English weekly), to advocate in their paper and speeches, the eight-hour day. This settled the controversy: Parsons, Spies and all the active revolutionary spirits in Chicago went to work in earnest. The result of their activities was made manifest, for when the first of May, 1886 arrived, it found Chicago the best organized city in America. In this city the working class struck between 50,000 and 60,000 strong and tied up the city more completely than I have ever seen it tied up during the thirty years that I have been a resident here.

On the afternoon of May 3rd, there were large numbers of strikers in the Southwestern portion of Chicago, among them the McCormick Reaper Works’ employes. According to the capitalist papers there was rioting among them. The police were called out to quell the riots. As is usually the case, when the police were called out, the working people were sticking together in large numbers; [though the police] did manage to quell some of them. On this occasion, they shot seven working men and clubbed many hundreds unmercifully.

Mayor Carter Harrison attended the Haymarket meeting, and took the stand at the Anarchist trial for the defense, not for the state. The Mayor testified that he attended the Haymarket meeting as the highest peace official in Chicago for the purpose of dispersing it, should it require his attentions as such. The Mayor further testified that when the meeting was about to be adjourned, he went to the Desplaines Street police station, and ordered the inspector to send his reserves to their several beats as the meeting was adjourning, was peaceable, and that he the Mayor was on his way home. No sooner was the Mayor out of sight, than the inspector, who wished to do something officious at the time of the great strike, rushed a company of police upon the meeting that had practically adjourned. At the onrush of the police, someone threw a bomb. Who threw that bomb, no one to this day knows, save he who threw it. He has never been found.

But the capitalist class didn’t care whether they found the bomb thrower or not; what they wanted was the leaders of the great strike, to get them out of the way and to frighten the slaves back to work. And the scheme worked magnificently, for after the bomb was thrown, the slaves for the most part forgot they had a grievance. Of course, to give the barest outline of the trial and death of my husband and comrades, would make this letter entirely too long. But the key to why their lives were sacrificed is found in the following excerpts from State’s Attorney Grinnell’s address to the jury. He said:

Gentlemen of the jury, these defendants at the bar are not more guilty than the thousands who follow them. They have been selected and indicted by the grand jury because they are leaders, convict them and save our society.

The great strike of May 1886, was an historic event of great importance, inasmuch as it was, in the first place, the first time that workers themselves had attempted to get a shorter work day by united, simultaneous action. To be sure there had been some earlier agitation, but always among the politicians in legislative halls and in congress. Needless to say such agitation was of no avail. But this strike was the first in the nature of Direct Action on a large scale, the first in America. It had its lasting effects, because it broke through the stone wall of the long-hour custom. What was gained by the workers was never wholly lost. The hours of labor have never been as long, as a whole, since 1886, as they were before that time.

Of course the eight-hour day is as antiquated as the craft unions themselves. Today, we should be agitating for a five-hour work day, or six at the most, but the IWW, I presume, has taken up the eight-hour cause on the principle that we must not get too far away from those we wish to influence or our labors are wasted.

The worldwide unrest among the wage class is the most hopeful sign of the times. Labor is learning that its most powerful and effective weapon is in its muscles and its brains. Let it withdraw these and the capitalist system is paralyzed. What labor wants is land for the landless, produce to the producer, tools to the toiler and death to wage-slavery.

When thou. weary of thy toil,

Shun’st thy plow, thy task begun.

When thou speak’st: Enough is done.

Image Gallery of The Eight-Hour Strike of 1886