His career as a participant in the labor movement grew out of his reflections on the Pittsburgh riots during the 1877 railroad strike, but before Haymarket had swung over to the extreme left position of the anarchists and mutualists, impressed with the possibilities of cooperation in economics. 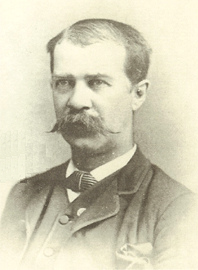 Dyer Daniel Lum (1839 – April 6, 1893) was a 19th-century American anarchist, labor activist and poet. A leading anarcho-syndicalist and a prominent left-wing intellectual of the 1880s, Lum is best remembered as the lover and mentor of early anarcha-feminist Voltairine de Cleyre.

Lum was a prolific writer who wrote a number of key anarchist texts, and contributed to publications including Mother Earth, Twentieth Century, Liberty (Benjamin Tucker's individualist anarchist journal), The Alarm (the journal of the International Working People's Association) and The Open Court among others. Following the arrest of Albert Parsons, Lum edited The Alarm from 1892–1893.

Traditionally portrayed as a "genteel, theoretical anarchist", Lum has recently been recast by the scholarship of Paul Avrich as an "uncompromising rebel thirsty for violence and martyrdom" in the light of his involvement in the Haymarket affair in 1886.

A distinction has been sought between what has been termed “Mutualistic Anarchy” and communistic anarchy, but it is one we fail to recognize. Anarchy, or the total cessation of force government, is the fundamental principle upon which all our arguments are based. Communism is a question of administration in the future, and hence must be subordinate to and in accord with the principles of Anarchy and all of its logical deductions. Anarchy proclaims that sovereignty of the individual, the abrogation of all artificial inequalities, and the total cessation of coercion over a minority, even if that minority be a single individual. To secure this end it demands the abolition of the State. This involves the destruction of the privilege... (From: TheAnarchistLibrary.org.)

Economics of Anarchy, The

“According to the etymology of the word, anarchy would mean absence of all government, of all political authority. *** Anarchy is nothing but self-government carried to its extremist limits, and the last step in the progress of human reason. *** Politics, as hitherto understood, would have no further raison d’être, and An-archy, that is to say, the disappearance of all political authority, would be the result of this transformation of human society in which all questions to be solved would have a purely economic character. Long ago J. B. Say advanced the opinion that the functions of the state should be reduced to the performance of police duties.{1} If so reduced there would be but one step needed to reach the An-archy of... (From: TheAnarchistLibrary.org.)

Economics of Anarchy, The : A Study of the Industrial Type

XI. Digression on Methods If equal rights be granted, and that under free conditions social supply must follow demand, why potter over methods? But because we are in a transition state, the question does arise: Shall our resistance to aggression be passive or active? Upon this point no answer is involved in our premises. Logically, however, the assertion of the law of equal freedom carries with it the sovereignty of the individual as a pre-requisite to voluntary cooperation; and this implies an equal right, singly or conjointly, to resist such invasion, and invasion under the forms of law does not invalidate the ethical proposition. Each must be guided as their own judgment determines, and whatever may be our judgment of the policy of su... (From: TheAnarchistLibrary.org.)

Fiction of Natural Rights, The

The very corner-stone of Anarchistic philosophy is often supposed to be a paraphrase of Herbert Spencer’s “First Principle” of equal freedom, that: “Every person has a natural right to do what he wills, provided that in the doing thereof he infringes not the equal rights of any other person.” Yet there lurks in the expression a fallacy that correct thought must repudiate, or we must carry with us a diagram explaining the meaning of the words we use. What are “natural rights?” In the middle ages school-men believed that they had solved a problem in physics by asserting that “nature abhors a vacuum”; but a very little study sufficed to convince thinkers that “the web of events&rdquo... (From: TheAnarchistLibrary.org.)

I. What Is Anarchy. The statesman, intent on schemes to compromise principles and tide over clamorous demands for justice, says it is disorder and spoliation. New taxes are then levied to defend the state, to repress incendiary talk, and protect privileged prerogatives. Or false and surface issues are prepared to distract attention, to embroil citizens in partisan quarrels, and furnish new offices for the spoils-hunter. The people pay the bills and the statesman remains. The priest, intent on saving souls, and setting less value on temporal things--for others--says it is abolition of marriage, atheism, and draws a picture of a state wherein his voice would be derided, yet ever careful to bring no testimony to corroborate his dismal fore... (From: TheAnarchistLibrary.org.)

To Hell with Her

I know a woman (in the profane, rather than in the sacred sense of that verb). She was born in far Norseland, and the bloom on her cheeks vied with the aurora borealis, the one dazzling young fishermen by day as the other did by night. Radiant in beauty and health, an eidelweiss on the bleak snow-covered scenery, the natural instincts which burn even in polar regions had their way: she married early. She gave birth to six children. She is now thirty and in this land of liberty. Free, or a deserted wife to earn her own living by “taking in washing.” At first, like all honeymoons, everything went sweetly. But her husband with inborn continental instinct, was “master;” hence jars arose. Leaving her surviving children i... (From: TheAnarchistLibrary.org.)

Why I Am a Social Revolutionist

Before answering the inquiry propounded to me, it were well to first define terms. In one sense whoever desires a radical change in our social conditions, who advocates principles at utter variance with those now maintaining, may be said to be a Social Revolutionist; in this sense the Quakers were religious revolutionists. But the accepted meaning of the term does not embrace revolution and evolution as identical words, but ascribes to the former active resistance by overt acts to the powers that be. It is in this sense that the term is here used, and I at once proceed to give some of the chief reasons why I defend such a course and array myself with those who do not make the assertion of principle subordinate to the lines of legality as la... (From: TheAnarchistLibrary.org.)