In April 1945 she was one of the four editors of War Commentary who were tried for incitement to disaffection, but she was acquitted on a legal technicality (a wife cannot conspire with her husband), and when her three comrades were imprisoned she took on the main responsibility for maintaining the paper into the postwar period. 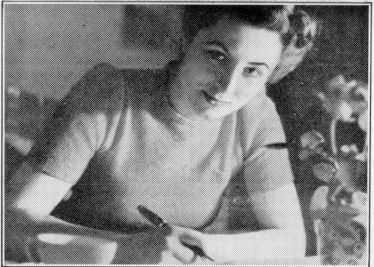 Marie Louise Berneri (1918-1949) born in Arezzo, Italy, the elder daughter of Camillo and Giovanna Berneri. Her father was a very popular and at times controversial figure in the Italian anarchist movement of the 1920s, and he and his family went into exile in 1926 for resisting Mussolini. Maria Luisa Berneri took on the french version of her name and went to study psychology at the Sorbonne in the mid-1930s. She soon became involved in the anarchist movement and produced the short-lived paper Revision, with Luis Mercier Vega. At the outbreak of the Spanish Civil War her father went to Spain, fought on the Aragon front, moved to Barcelona, and edited the prestigious Italian-language revolutionary anarchist paper Guerra di Classe. Marie went twice to Barcelona, the second time after her father's assassination by Communists in May, 1937. She subsequently moved to England and took an active part in the production of the English anarchist paper Freedom. Projects Berneri worked on included Spain and the World, Revolt! (the successor to Spain and the World) and being part of one of the small groups which started War Commentary.

Her wide contacts in and knowledge of the international movement gave her great authority among anarchists, but her libertarian principles and personal modesty prevented her from misusing it. In April 1945 she was one of the four editors of War Commentary who were tried for incitement to disaffection, but she was acquitted on a legal technicality (a wife cannot conspire with her husband), and when her three comrades were imprisoned she took on the main responsibility for maintaining the paper into the postwar period. After her death in 1949 from a viral infection, several of her works were published posthumously by Freedom Press; Neither East Nor West and Journey Through Utopia, as well as various contributions to Freedom Press periodicals.

Books about Spain have been written either by learned professors who write history ignoring completely working class movements and the existence of the class struggle and who therefore put fanciful interpreta- tions on events they are unable to understand, or by journalists who feel qualified to write about Spain after spending only a few days or a few weeks in the country and without having acquired any previous knowledge of the historical background of the people. Such books sometimes contain brilliant passages, like Borkenau’s Spanish Cockpit or George Orwell’s Homage to Catalonia, but are also full of inexacti- tudes and hasty generalizations. They are also often written with a bias to suit the political fashion of the momen... (From: TheAnarchistLibrary.org.)

I. The revolutionary period 1919–1921 The Italian people played an unenthusiastic part during the last war. They had been strongly impregnated with socialist and anarchist ideas and they saw in the war, not a struggle for democracy, but another imperialist conflict. The left-wing parties did not betray their internationalist ideals as openly as they did in other countries, A section of the Socialist party opposed the war throughout while the great majority gave it only lukewarm support. The anarchist movement refused to take part in the imperialist bloodbath and consistently opposed the war. The ruling class, in order to obtain some support from the Italian people, had to bribe them with promises; they assured the workers that the... (From: TheAnarchistLibrary.org.)

Stakhanovism and the British Workers

War brings the need for increased production and maximum effort on the part of the workers. This is what all the propaganda nowadays tries to impress on the workers. Since Russia has come into the war it is not surprising therefore that the Russian worker should be given as an example to the British workers in order to induce them to produce more. The Russian Trade Union delegation in all its speeches stressed the fact that production could be increased and that workers in Russia produce far more than they do here. The influence of Russian methods is already felt. The Manchester Guardian of 8th March 1942, under the heading ‘Stakhanovites in Lancashire’, printed the following report: The Cotton Board’s ‘Trade Le... (From: TheAnarchistLibrary.org.)

Utopias of the English Revolution

While on the Continent the seventeenth century saw the consolidation of absolute governments, in England the absolutism of the kings was resolutely opposed by a great section of the population, and the power of the monarchy was held in check by Parliament. At a time when Louis XIV was able to proclaim “L’Etat c’est Moi,” Charles I was led to the scaffold. The doctrine of the divine right of kings, which had allowed the French monarchs to crush all political and religious freedom, had gained little support among English people who believed, on the contrary, that the power of the rulers must respect the inalienable rights of the individual and that certain limitations must be put to the power of the head of the state. ... (From: TheAnarchistLibrary.org.)

Wilhelm Reich and the Sexual Revolution

Editor’s Introduction In her article “Sexuality and Freedom,” originally published in George Woodcock’s Now in 1945, Marie Louise Berneri (Selections 4 & 15) reviews the pioneering work of Wilhelm Reich (1897–1957), focusing on Reich’s then recent publication, The Function of the Orgasm (New York: Orgone Institute Press, 1942). Reich had come to the attention of anarchists with his previous publication, The Mass Psychology of Fascism (1933), in which Reich drew the connections between sexual repression, family structure and authoritarianism (see Volume 1, Selection 119). Reich’s work is similar to that of the earlier radical psychoanalyst, Otto Gross (Volume 1, Selection 78), but he placed much... (From: TheAnarchistLibrary.org.)