(1853 - 1932) ~ Italian, Anarchist Intellectual, Anti-Capitalist, and Anti-Fascist : There have almost certainly been better anarchist writers, more skilled anarchist organizers, anarchists who have sacrificed more for their beliefs. Perhaps though, Malatesta is celebrated because he combined all of these so well, exemplifying thought expressed in deed... (From : Cunningham Bio.)
• "...all history shows that the law's only use is to defend, strengthen and perpetuate the interests and prejudices prevailing at the time the law is made, thus forcing mankind to move from revolution to revolution, from violence to violence." (From : "Further Thoughts on the Question of Crime," by Er....)
• "...the agelong oppression of the masses by a small privileged group has always been the result of the inability of the oppressed to agree among themselves to organize with others for production, for enjoyment and for the possible needs of defense against whoever might wish to exploit and oppress them. Anarchism exists to remedy this state of affairs..." (From : "Anarchism and Organization," Authored by Errico M....)
• "And tomorrow, in the revolution, we must play an active part in the necessary physical struggle, seeking to make it as radical as possible, in order to destroy all the repressive forces of the government and to induce the people to take possession of the land, homes, transport, factories, mines, and of all existing goods, and organize themselves so that there is a just distribution immediately of food products." (From : "The Anarchist Revolution," by Errico Malatesta.)

Opposition to institutions, support the workers rights because a right without opportunity is no right at all, and our struggle against the exploiters should be led by love and not hatred.

About My Trial: Class Struggle or Class Hatred? 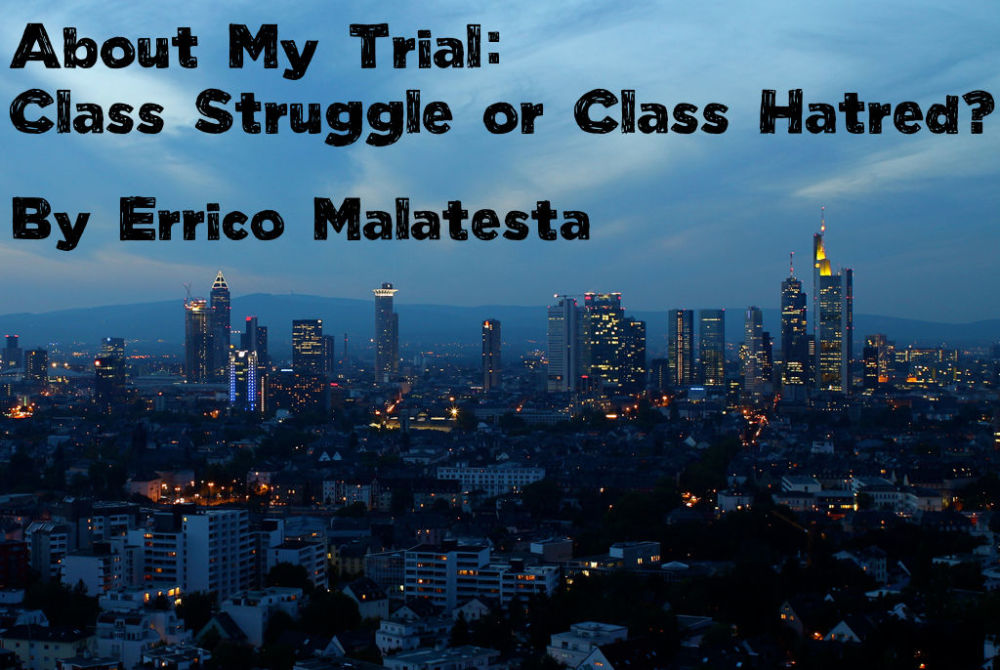 I expressed to the jury in Milan some ideas about class struggle and proletariat that raised criticism and amazement. I better come back to those ideas.

I protested indignantly against the accusation of inciting to hatred; I explained that in my propaganda I had always sought to demonstrate that the social wrongs do not depend on the wickedness of one master or the other, one governor or the other, but rather on masters and governments as institutions; therefore, the remedy does not lie in changing the individual rulers, instead it is necessary to demolish the principle itself by which men dominate over men; I also explained that I had always stressed that proletarians are not individually better than bourgeois, as shown by the fact that a worker behaves like an ordinary bourgeois, and even worse, when he gets by some accident to a position of wealth and command.

Such statements were distorted, counterfeited, put in a bad light by the bourgeois press, and the reason is clear. The duty of the press paid to defend the interests of police and sharks, is to hide the real nature of anarchism from the public, and seek to accredit the tale about anarchists being full of hatred and destroyers; the press does that by duty, but we have to acknowledge that they often do it in good faith, out of pure and simple ignorance. Since journalism, which once was a calling, decayed into mere job and business, journalists have lost not only their ethical sense, but also the intellectual honesty of refraining from talking about what they do not know.

Let us forget about hack writers, then, and let us talk about those who differ from us in their ideas, and often only in their way of expressing ideas, but still remain our friends, because they sincerely aim at the same goal we aim at.

Amazement is completely unmotivated in these people, so much so that I would tend to think it is affected. They cannot ignore that I have been saying and writing those things for fifty years, and that the same things have been said by hundreds and thousands of anarchists, at my same time and before me.

Let us rather talk about the dissent.

There are the “worker-minded” people, who consider having callous hands as being divinely imbued with all merits and all virtues; they protest if you dare talking about people and mankind, failing to swear on the sacred name of proletariat.

Now, it is a truth that history has made the proletariat the main instrument of the next social change, and that those fighting for the establishment of a society where all human beings are free and endowed with all the means to exercise their freedom, must rely mainly on the proletariat.

As today the hoarding of natural resources and capital created by the work of past and present generations is the main cause of the subjection of the masses and of all social wrongs, it is natural for those who have nothing, and therefore are more directly and clearly interested in sharing the means of production, to be the main agents of the necessary expropriation. This is why we address our propaganda more particularly to the proletarians, whose conditions of life, on the other hand, make it often impossible for them to rise and conceive a superior ideal. However, this is no reason for turning the poor into a fetish just because he is poor; neither it is a reason for encouraging him to believe that he is intrinsically superior, and that a condition surely not coming from his merit or his will gives him the right to do wrong to the others as the others did wrong to him. The tyranny of callous hands (which in practice is still the tyranny of few who no longer have callous hands, even if they had once), would not be less tough and wicked, and would not bear less lasting evils than the tyranny of gloved hands. Perhaps it would be less enlightened and more brutal: that is all.

Poverty would not be the horrible thing it is, if it did not produce moral brutishness as well as material harm and physical degradation, when prolonged from generation to generation. The poor have different faults than those produced in the privileged classes by wealth and power, but not better ones.

If the bourgeoisie produces the likes of Giolitti and Graziani and all the long succession of mankind’s torturers, from the great conquerors to the avid and bloodsucking petty bosses, it also produces the likes of Cafiero, Reclus and Kropotkine, and the many people that in any epoch sacrificed their class privileges to an ideal. If the proletariat gave and gives so many heroes and martyrs of the cause of human redemption, it also gives off the white guards, the slaughterers, the traitors of their own brothers, without which the bourgeois tyranny could not last a single day.

How can hatred be raised to a principle of justice, to an enlightened spirit of demand, when it is clear that evil is everywhere, and it depends upon causes that go beyond individual will and responsibility?

Let there be as much class struggle as one wishes, if by class struggle one means the struggle of the exploited against the exploiters for the abolition of exploitation. That struggle is a way of moral and material elevation, and it is the main revolutionary force that can be relied on.

Let there be no hatred, though, because love and justice cannot arise from hatred. Hatred brings about revenge, desire to be over the enemy, need to consolidate one’s superiority. Hatred can only be the foundation of new governments, if one wins, but it cannot be the foundation of anarchy.

Unfortunately, it is easy to understand the hatred of so many wretches whose bodies and sentiments are tormented and rent by society: however, as soon as the hell in which they live is lit up by an ideal, hatred disappears and a burning desire of fighting for the good of all takes over.

For this reason true haters cannot be found among our comrades, although there are many rhetoricians of hatred. They are like the poet, who is a good and peaceful father, but he sings of hatred, because this gives him the opportunity of composing good verses... or perhaps bad ones. They talk about hatred, but their hatred is made of love.

For this reason I love them, even if they call me names.