Anarchism and Feminism: Toward a Happy Marriage?

For me, history of philosophy and a critical theory of society are two sides of the same coin: our interest for the past always reflects the standpoint of the present, but one cannot understand the present without navigating our past. I see philosophy as a critical tool in a constant dialogue with other disciplines, as well as an endeavor entangled with other practices for sense making such as literature and psycoanalysis. I have written on critical theory, the history of European philosophy (particularly early modern), capitalism, feminism, racism, post- and decolonial studies, and esthetics. (From: NewSchool.edu.)

Anarchism and Feminism: Toward a Happy Marriage?

Some have argued that the marriage between Marxism and feminism ended up in an unhappy marriage: by reducing the problem of women’s oppression to the single factor of economic exploitation, Marxism risks dominating feminism precisely in the same way in which men in a patriarchal society dominate women (Sargent 1981). The oppression of the latter needs to take into account a multiplicity of factors, each with its own autonomy, without attempting to reduce them to one all-explaining source — be it the extraction of surplus value in the workplace or unpaid shadow work in the household. There seems to be something intrinsically multifaceted in the oppression of women — so much so that women’s and gender studies programs are all, inevitably, interdisciplinary ones.

The question then arises whether feminism could not find a better partner in anarchism. Despite the fact that anarchism and Marxism often went on the same path and even converged in workers struggles, the major difference between them is that anarchist thinkers work with a more variegated notion of domination that emphasizes the existence of forms of exploitation that cannot be reduced to economic factors — be they political, cultural or, we should add, sexual. Hence also its happier marriage with feminism: if the relationship between Marxism and feminism has overall been characterized as a dangerous liaison (Arruzza 2010), which reproduced the same logic of domination occurring between the two sexes, then the relationship between feminism and anarchism seems to be a much more convivial encounter. Historically, the two have converged so often that some have argued that anarchism is by definition feminism (Kornegger “Anarchism: the feminist connection” in R. Graham, ed., 2007). The point is not simply to register that, from Michail Bakunin to Emma Goldman, and with the only (possible) exception of Proudhon, anarchism and feminism often went hand in hand. This historical fact signals a deeper theoretical affinity. You can be a Marxist without being a feminist, but you cannot be an anarchist without being a feminist at the same time. Why not? 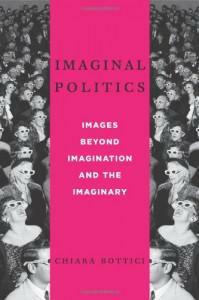 Book cover of Imaginal Politics: Images Beyond Imagination and the Imaginary by Chiara Bottici

If anarchism is a philosophy that opposes all hierarchies, including those that cannot be reduced to economic exploitation, it has to oppose the subjection of women, too, for otherwise it is incoherent with its own principles. Most anarchist thinkers work with a conception of freedom which is best characterized as a “freedom of equals” (Bottici 2014), according to which I cannot be free unless everyone else is equally free, because even if I am the master, the relationship of domination to which I participate will enthralled me as much as the slave herself — it is the paradox of domination that even a philosopher like Rousseau, who was neither a self-declared anarchist nor a feminist, strongly emphasized.

But if I cannot be free unless I live surrounded by people who are equally free, that is, unless I live in a free society, then the subjection of women cannot be reduced to something that concerns only a part of society: a patriarchal society will be fundamentally oppressive for both sexes, precisely because I cannot be free on my own. And this is something that we tend to forget: patriarchy is oppressive for everybody, not only for women.

So if it is true that anarchism has to be by definition feminism, does the opposite hold? Can there be feminists who are not anarchists? Clearly, historically speaking, many feminist movements were not anarchist. However, some feminists claimed that feminism, in particular the second-wave feminism of the 1970s, was anarchist in its deep structure and aspirations. According to Peggy Kornegger (2007), for instance, radical feminists of this period were unconscious anarchists both in their theories and their practices. The structure of women’s groups (e.g., consciousness-raising groups), with their emphasis on small groups as the basic organizational unit, on the personal which is political, and on spontaneous direct action, bore a striking resemblance to typically anarchistic forms of organization (ibid., 494).

But even more striking is the conceptual convergence with the conception of freedom that I have described above. For instance, Kornegger affirms that “liberation is not an insular experience” because it can occur only in conjunction with all other human beings (ibid., 496), which, again, means that freedom cannot but be a freedom of equals. However, this also implies that one cannot fight patriarchy without fighting all other forms of hierarchy, be they economic or political. As Kornegger (2007:493) again put it, “feminism does not mean female corporate power or a woman president: it means no corporate power and no president.” 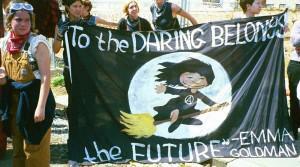 Otherwise stated, feminism does not simply mean that women should take the place occupied by men (which would be a rather phallic form of feminism); rather, women should fight to radically subvert the logic of domination where sexism, racism, economic exploitation, and political oppression reciprocally reinforce one another, although with different forms and modalities in different contexts. This holds even more so today, in a globalizing world where different forms of oppression and exploitation, whether based on gender, sex, race, or class, sustain each other. Perhaps the greatest contribution of third-wave feminism is that it pointed toward the need for a multifaceted analysis of domination, with its emphasis on post-colonialism and intersectionality. If by feminism we understand simply the fight for formal equality between men and women, we risk creating new forms of oppression. We run the risk that equality between men and women will signify only that women must take positions once reserved for white bourgeois males, thus further reinforcing mechanisms of oppression rather than subverting them. For instance, if we take the emancipation of white women to mean simply entering the public sphere on an equal footing with men, this, in turn, may imply that somebody else has to replace these women in their households. But for the immigrant woman who replaces the white housewife in providing domestic care, this is not liberation: she merely exits her household in order to enter into another one as a waged laborer. In the current predicament, the emancipation of some (white) women directly risks meaning the oppression of other (immigrant, black, or southern) women, if feminism does not aim at dissolving all forms of hierarchy, whether they are entrenched in gender, class, or racial oppression.

To conclude, maybe feminism has not historically always been anarchist, but it should be because it should aim at subverting all forms of domination — be they sexist, economic, and political. Feminism, today more than in the past, cannot mean only women rulers or women capitalists: it means no rulers and no capitalism.

Image Gallery of Anarchism and Feminism: Toward a Happy Marriage?